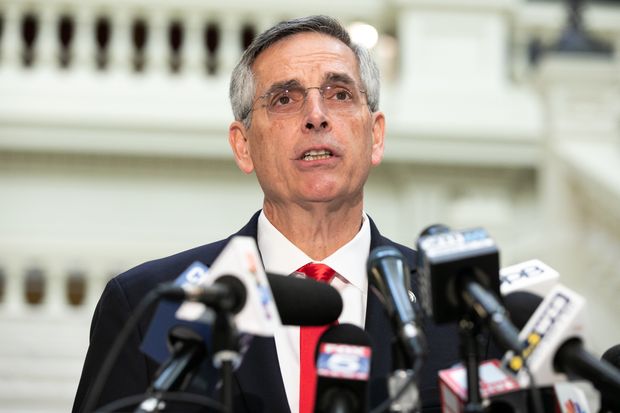 The Associated Press officially called Georgia for Biden moments after the recount was completed. A victory there brings his lead in the Electoral College to 306-232, the exact margin by which President Donald Trump beat Hillary Clinton four years ago.

Georgia’s Secretary of State Brad Raffensperger said in an interview with GPB News earlier Thursday that he is “disappointed when I put on my Republican hat,” but that the results reflect “the will of the Georgian voter.”

The recount in Georgia was a matter of intense focus, given that a Democratic presidential candidate has not won the state since Bill Clinton in 1992, and because high-ranking Republicans including the president leveled baseless accusations that the result there was impacted by widespread election fraud.

Allies of the president, including his personal lawyer, former New York Mayor Rudy Giuliani, have suggested that election fraud was committed in Georgia when election workers declined to verify ballots by matching signatures on those ballots to a list of registered voters.

“The recount in Georgia will tell us nothing because these fraudulent ballots will just be counted again because they wouldn’t supply the signatures to match the ballots,” Giuilani said in a press conference Thursday.

Neither the Trump campaign nor Guiliani, however, have provided evidence that invalid ballots were accepted. In fact, Georgia law dictates that signatures for voters who wish to vote by mail must be verified twice: once when a citizen submits his application for a mailed ballot and again when local election officials receive the ballot.

Ballot recounts cannot involve reverifying of signatures, because signed ballot envelopes are not stored with their respective ballots to protect the secrecy of citizen’s votes, in accordance with the Georgia Constitution.

: WHO advisers recommend against Gilead’s remdesivir for treating COVID-19
The Moneyist: ‘I’m nobody’s ATM’: I’m 27, successful, and always pay for my friends. How do I stop without making them angry?
Comment

In One Chart: Whatever the reason — criminal activity, interest rates, safety, inflation — the world just can’t get enough of the $100 bill