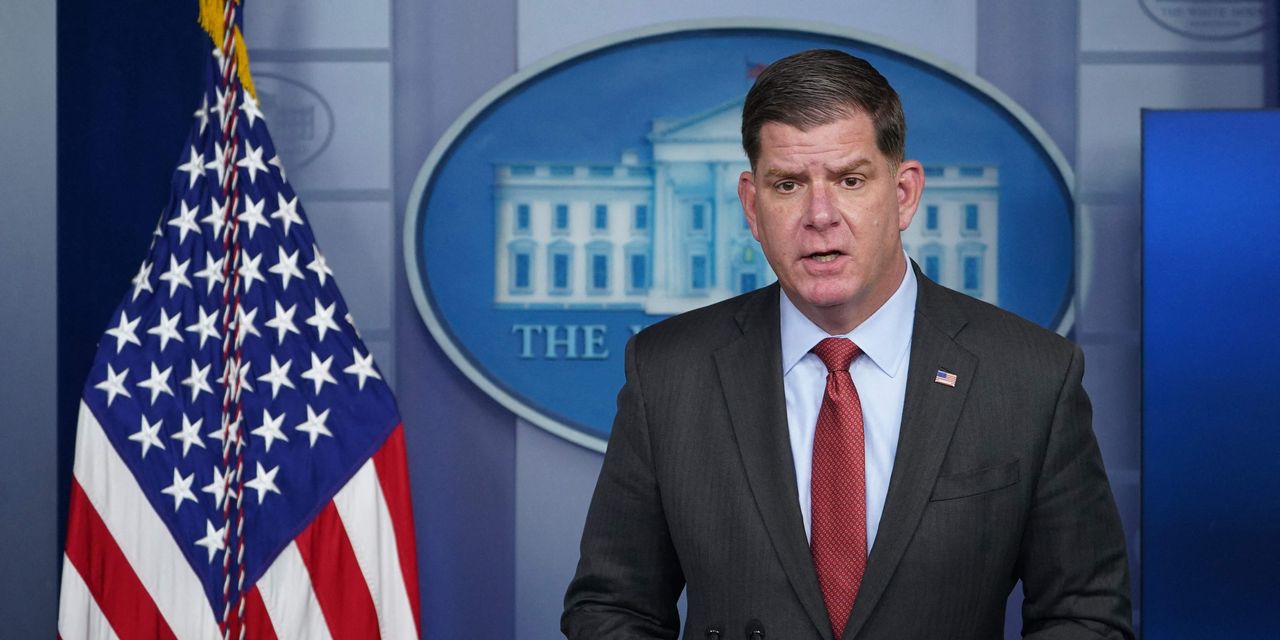 U.S. Labor Secretary Marty Walsh sent massive ripples through the “gig economy” last week by stating that he believes gig workers should be classified as employees instead of independent contractors “in a lot of cases.”

What happens next could mean upheaval for the multibillion-dollar companies and the tens of millions of workers on which they depend. Labor leaders and academics have advocated for interpreting federal law in favor of workers who they say have been misclassified for too long, while Walsh told Reuters he will be holding talks with gig companies as he considers the issue.

Uber Technologies Inc. UBER, +0.81%, DoorDash Inc. DASH, +1.73% and the App-Based Work Alliance stated last week that they “look forward” to working with Walsh, but the rest of their statements signaled their positions loud and clear: They plan to keep fighting to develop new laws tailored to their business model, after succeeding in their California effort.

“We look forward to coming together with Secretary Walsh to have these much-needed discussions about advancing modern policies that protect worker independence and flexibility, while strengthening benefits and protections,” said App-Based Work Alliance, which represents Uber, Uber-owned Postmates, Lyft Inc. LYFT, +0.54%, DoorDash and Instacart.

Workers for the app-based platforms accept “gigs” on their phones from the companies, which contend they act as platforms for connecting workers to customers, not as an employer that would provide benefits such as unemployment insurance and a minimum hourly wage. Walsh, a former union leader, told Reuters in an interview that the Labor Department will be talking with the companies about workers’ wages, sick time and other benefits “that an average employee in America can access.”

With Walsh at the helm of President Joe Biden’s worker-friendly administration, labor experts and worker organizers are feeling cautiously optimistic.

“What a 180-degree reversal this seems to be from the days of Trump,” said William Gould, professor emeritus at Stanford Law School and a former chairman of the National Labor Relations Board.

The Biden administration this week repealed a rule Donald Trump’s administration put in place right before the end of his term that would have made it easier for gig companies to classify workers as independent contractors. The Labor Department said it would not be issuing a new rule in the near future, so it could bring companies before the National Labor Relations Board under existing rules.

Veena Dubal, a professor at UC Hastings College of the Law, believes that Walsh could threaten charges against gig companies under current federal law.

“It’s great that [Walsh] sees quite clearly that these workers are employees that need and deserve the same benefits,” Dubal said. “I’m eager to see how he goes about enforcing the law.”

In California, where voters passed Proposition 22 in November, Uber and the other companies spent a record-breaking $200 million-plus to put the measure on the ballot to ensure they could continue to avoid treating drivers as employees. Now they could face federal enforcement actions and lawsuits that would supersede the rules in California and other states.

“Federal law in the wage and hour arena is supreme,” Gould said, meaning that if the companies don’t comply with either the Labor Department’s interpretation of labor laws or any possible updates to the rules, the government could sue them.

The Labor Department said Monday it would have no additional comment about when the talks between the companies and the department might take place, or what they will look like. Uber and DoorDash said they would have no more comment. The App-Based Work Alliance has not responded to further requests for comment.

The App-Based Work Alliance also said in its statement that “Over 70 percent of app-based workers have repeatedly said they do not want to be reclassified into a rigid and outdated employment model. We can do better. We must all listen to workers.”

Gig companies regularly tout the flexibility they offer their workers, and cite mostly self-commissioned polls that bolster their assertion that most workers want to stay independent. In its statement, DoorDash said its workers average just four hours a week of work.

But many others on the on-demand app platforms are working full time. A survey by the UC Santa Cruz Institute for Social Transformation found last year that in San Francisco, a majority of respondents said platform work was their primary source of income, with 71% working more than 30 hours a week, including 50% who work more than 40 hours a week.

Chase Copridge says he has “since worked on nearly every app” for the past six years but is now doing deliveries for Amazon Flex in the Bay Area after moving to California from Kentucky a couple of years ago.

“The truth is I have almost no flexibility,” he told Sen. Sherrod Brown, D-Ohio, during a virtual briefing with the Banking, Housing, and Urban Affairs Committee last week. “I’m either working or looking for my next gig,” he added.

After “running his car into the ground,” Copridge said he now lives in a van. “Every investor putting money into these companies should know what’s really going on,” he added.

In an interview with MarketWatch, Copridge said he used to do deliveries for DoorDash and Instacart but “they pay so little it’s not worth it.” With Amazon AMZN, -0.45% Flex, he says he works seven days a week, usually for four hours at a time — “seven or eight if I’m lucky” enough to get two separate shifts a day — and averages about $20 an hour.

Copridge said he was excited to hear Walsh’s comments about gig workers. “I hope he can enforce that, and maybe it can circumvent Prop. 22 in California.”

What unions and others want

The possibility that this administration’s actions could upend the gig economy comes as Copridge and others are urging Congress to pass the Protect the Right to Organize Act, which they believe would give workers like them the right to form unions and collectively bargain.

The U.S. House of Representatives passed the PRO Act in March, but it faces an uphill climb in the Senate, where there are three Democratic holdouts: Mark Kelly and Kyrsten Sinema of Arizona, and Mark Warner of Virginia.

One sticking point in the PRO Act is that it uses the “ABC test” to determine whether a worker should be classified as an employee. That test, which California and other states have adopted, can affect other workers. Freelance writers and others have said they have lost work because of it.

But John Logan, a professor and director of the Labor and Employment Studies Department at San Francisco State University, said the PRO Act will not “do away with freelancing. There will still be a lot of that around.”

In the case of workers for Uber and other gig companies, Logan said, “the issue is employees are controlled by the companies and the algorithms,” which is why the worker-classification issue has for years been debated in courts, legislatures and at the ballot box.

It is possible the Labor Department could wait to act on Walsh’s comments until after the PRO Act question is settled, but the timeline is unclear. Gould said he expects possible action in the summer or sometime this year.

In California, Uber, Lyft, DoorDash and Instacart spent more than $200 million, a record, to bring Proposition 22 before voters. After nearly 60% of the state’s residents voted for the measure, the companies said they want to expand the model.

Uber, Lyft and the other companies are pushing for a “third way,” effectively an expansion of what they have managed to carve out in California and elsewhere. Uber has branded that scenario as IC+, a separate category for drivers and delivery workers that gives them guaranteed incomes and some health benefits under certain circumstance, but falls short of treating them as employees with all the rights and benefits that entails.

Dubal said other ways the companies might avoid employee classification include going through temporary staffing agencies or adopting a franchise model, in which they license their brands to operators of vehicle fleets.

The classification issue affects taxpayers whether or not they have used any of the ride-hailing or delivery platforms.

For example, the UC Santa Cruz Institute for Social Transformation survey last year, conducted before the pandemic, also found that 15% of San Francisco gig workers received some sort of public assistance, such as food stamps or housing assistance.

And as the coronavirus pandemic has shown, when demand for rides fell sharply, drivers who suddenly had no income did not qualify for regular unemployment benefits because they are not classified as employees. The gig companies do not pay into state unemployment insurance funds. In California, a UC Berkeley Labor Center study estimated that Uber and Lyft would have had to pay $413 million into the state’s unemployment insurance fund from 2014 to 2019 if they had been required to do so.

In the past year, some drivers got unemployment funds only because of the U.S. government’s Pandemic Unemployment Assistance program.

What Walsh does in saying gig workers should be employees is “really put his finger on a major inequity — a scandalous inequity,” Gould said. “The federal government had to jump in and provide unemployment compensation. Uber and Lyft got a free ride.”

Square Is Just Getting Started, This Is Why It’s a Buy
3 Reasons Microsoft Is Not Done Growing
Comment

How Amazon Could Cost This Industry $20 Billion

VMware to Present at the Piper Sandler P.S. It's Friday: "5G vs LTE: Find Out What It Means to Me" | 5G Infrastructure Virtual Event