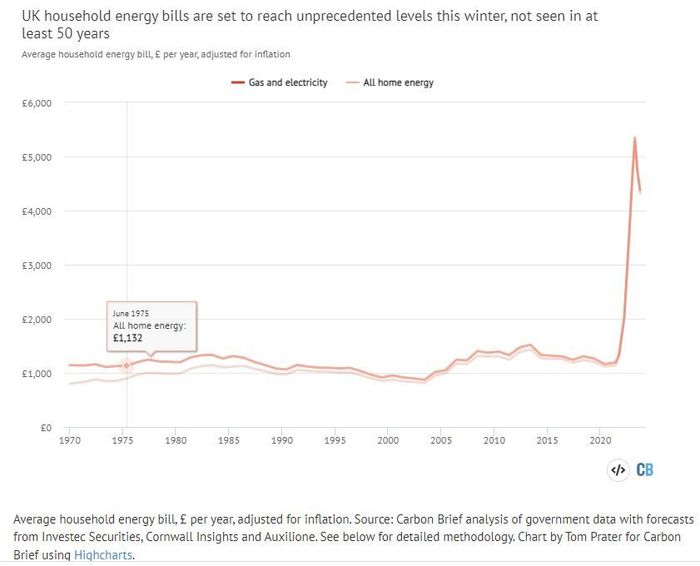 Campaign group Don’t Pay U.K is aiming for 1 million supporters to refuse to pay their energy bills as regulators increased the tariff by 80% on Friday. Read More...

It’s the summer of strikes in the U.K.

Don’t Pay U.K has called for consumers to cancel their automatic bank transfers on energy bills from Oct. 1 to force gas and electric providers to reduce the maximum amount they can charge customers annually.

The prospect of surging electricity prices prompted an eye-popping forecast from Citi analysts who say U.K inflation could reach as much as 19% next year.

But even providers such as Octopus Energy have said neither customers nor retailers should be carrying the cost of Russia’s war in Ukraine, and have called for the government to double its support package.

To date, over 115,000 people have pledged to cancel their bills, though Don’t Pay U.K. has said the strike will only take place if one million people sign up.

Activists from the movement have told MarketWatch that they are confident more people will come on board, especially as OFGEM raised the official October cap on Friday by 80% to £3,549.

Glyn Robbins, 57, a Don’t Pay grass roots activist, told MarketWatch that the campaign was set up to force the government, OFGEM and energy providers to “see sense” and reduce prices to a “more reasonable level”.

“If it went back to the level that was being talked about back in the spring, obviously we were aware of the broader issues in terms of Ukraine and so forth, I think that probably would be enough for most people,” he said.

Robbins joined the movement almost two months ago when his partner found a Don’t Pay leaflet on the ground near their home in east London.

He said he was more concerned about those who cannot pay their bills, rather than those who don’t want to pay. “We already have about 8 million people classified as in fuel poverty in this country at the moment. That’s before this got worse and 2 million of them are old age pensioners.

“I’m more concerned about what this means for the younger people, for poor people, older people or people with disabilities who have far less control over how they use energy. This is to me a line in the sand,” said Robbins, who believes the movement could sweep the country as suffering will be widespread.

“I’m not primarily doing it for myself. I’m reasonably comfortable financially, but I’ve got a granddaughter and I’m concerned about her future,” he said.

When asked if he was worried about possible consequences of supporters not paying the bills, such as energy providers taking legal action or cutting off supply, Robbins said, “Most people are not doing this in a flippant, casual way…It might be that people pay what they can afford, and don’t pay the rest. Or they set up a payment arrangement line.”

Tyler Richey, co-editor at financial research firm, Sevens Report Research, told MarketWatch: “If one million households in the U.K. didn’t pay their utility bills, I have to assume the respective utility companies would eventually cut power to those homes and that would actually ease some of the demand pressures on the grid which is expected to be strained this winter given the very low flows from Russia to Europe.”

An effort in vain?

In a client note from RBC Capital Markets, a team of analysts led by John Musk said that British Gas owner Centrica CNA, +1.30% has 60% of its customers on automatic payment who could potentially not pay, but that any “bad-debt risk” would be temporary.

“What we would not expect to see however is lower energy costs for consumers as a result of this movement, with energy suppliers largely operating low margin pass-through businesses amid a period of significantly elevated underlying commodity costs,” said Musk.

He added that he understood why concerns of rising bills have led to the campaign’s establishment, and maintained that the government must step in to increase its support for households come this fall.

“Final point, if significant numbers of customers aren’t paying their bills (for whatever reason) then that increases the amount of bad debt which then has to be recouped from all customers’ bills,” said the spokesman.