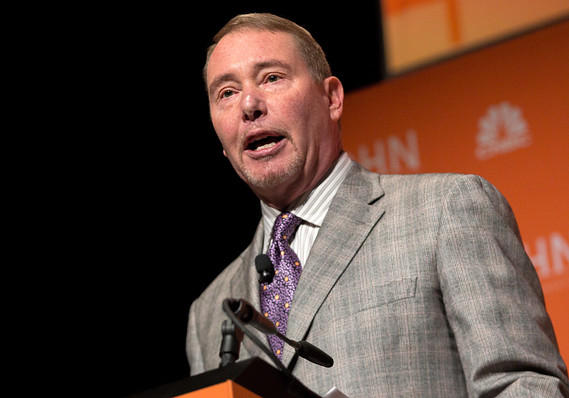 Jeffrey Gundlach on Thursday struck a pessimistic tone, saying there was a 75% chance of a recession before the next election as he warned the corporate bond market was a crisis waiting to happen. Read More...

Jeffrey Gundlach on Thursday struck a pessimistic tone, saying there was a 75% chance of a recession before the next presidential election as he warned that the corporate bond market is a crisis waiting to happen.

Gundlach, the outspoken chief executive of DoubleLine, mockingly delivered a presentation called the “Greatest Economy Ever,” an allusion to President Donald Trump’s characterization, which the famed bond investor doesn’t share.

Gundlach, to a London audience, outlined a number of worrying signs, including declines in purchasing indexes, which peaked at right about the same time the U.S. and global stock markets SPX, +0.29% did.

Gundlach said neither Trump nor China would be willing to agree to a trade deal, with the Chinese side waiting for the possible electoral defeat of the White House incumbent.

He also pointed to a New York Fed model showing a rising likelihood of a U.S. recession but did concede that jobless-claims data have been indicative of a strong labor market, even if jobs growth has slowed.

A bear on the U.S. dollar DXY, -0.24%  , Gundlach expects more interest-rate cuts from the Federal Reserve, with the bond market having priced in four.

Asked about the housing market, he said he doesn’t see another 2008-style crisis there, noting that the quality of underwriting has changed since then, though he thinks the market will remain depressed as baby boomers try to sell the McMansions that millennials don’t like and Gen Z hates.

In corporate bonds, Gundlach does foresee crisis, noting one piece of Morgan Stanley research concluding that a third of investment-grade debt should really be rated high-yield.

He said the corporate bond market has surged in size and is highly leveraged, with weak covenants. “So when you have the recession, there won’t be an ability to address these issues,” he said.

Retail investors have poured into the asset class because of the relatively high returns, as have corporate pension funds trying to match assets with liabilities.

Gundlach said his firm’s Total Return Fund DBLTX, -0.09% has never owned corporate bonds, and in other portfolios the company was 80% underweight.

He said he’s turned neutral on gold GC00, +0.33% — saying it will be tough for the yellow metal to rise above $1,600 an ounce — though the fact that it hit a record in euro terms is a good sign for how it may do in dollar terms.

As far as asset classes he does like, Gundlach identified Triple-A rated collateralized debt obligations and mortgage-backed securities not backed by Fannie Mae or Freddie Mac.

Gundlach also spoke to the London audience at length about U.S. politics, saying Sen. Elizabeth Warren was a strong candidate who has learned on the campaign trail, and whose wealth-tax proposal is popular among both Democrats and Republicans. “I don’t like what she says, but she says it really well,” he said. “She’s smart.”

He was less enthused about former Vice President Joe Biden, whom he called “Jurassic Joe,” and Sen. Kamala Harris, whom he said wasn’t quick on her feet. Gundlach said he thinks former Secretary of State Hillary Clinton could still enter the field, judging by a recent speech she delivered, particularly if Biden were to bow out.

He said Trump wouldn’t run for re-election if there’s a recession as efforts to blame the Fed wouldn’t work because most Americans don’t know what the central bank is.

MarketWatch First Take: Uber makes a lot of big promises for 2020 — now it just has to live up to them