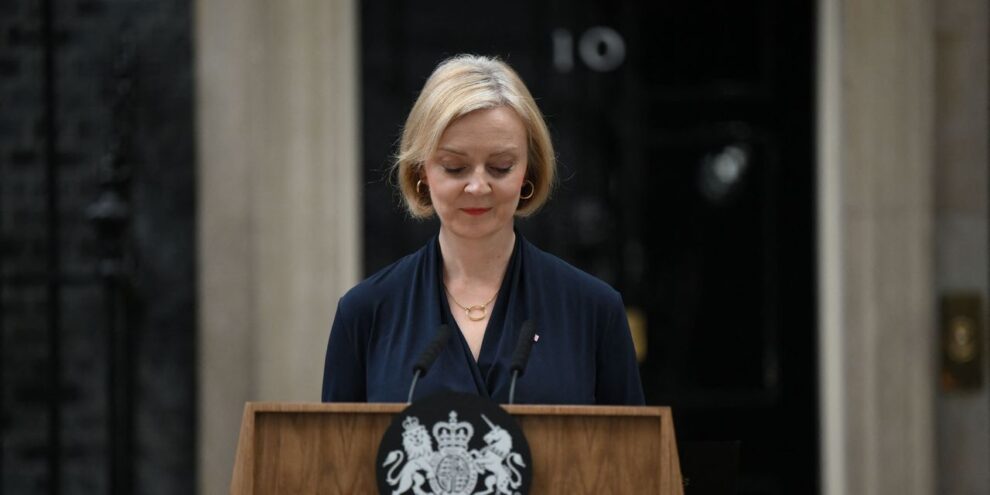 Do you like your job? This advice may help you on the way out. Read More... 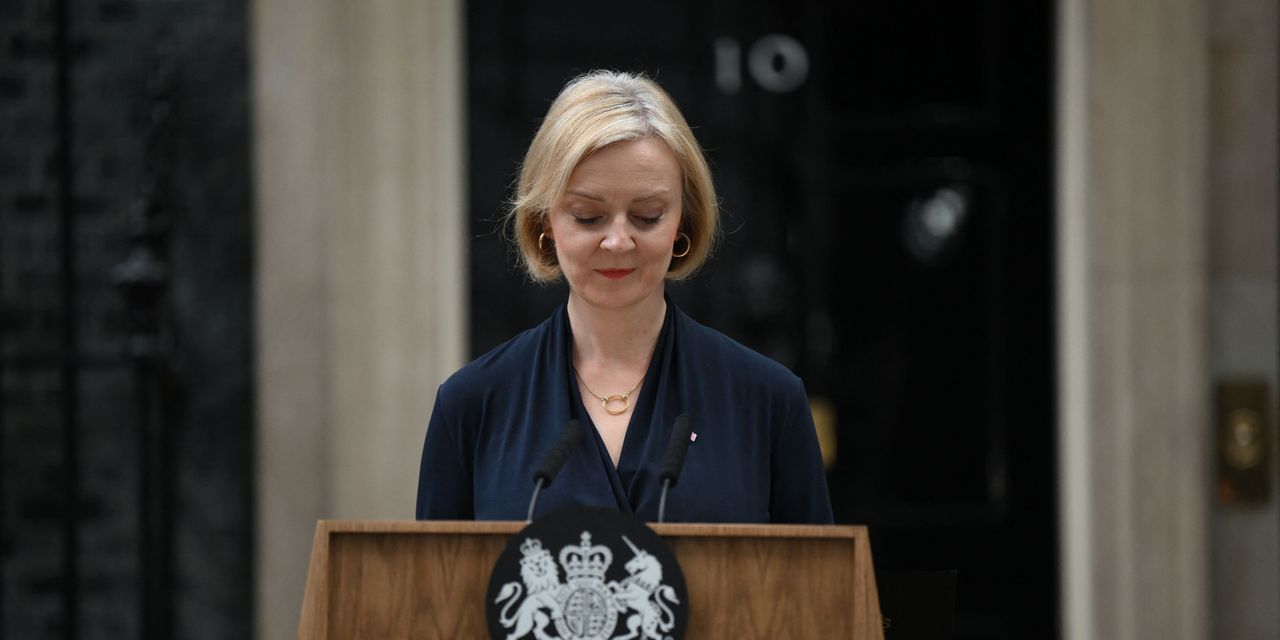 It wasn’t fun while it lasted.

U.K. Prime Minister Liz Truss will be shortest-serving U.K. prime minister ever. On the steps of No. 10 Downing Street, the embattled leader said she will leave office next week once a successor is chosen, having served only 44 days in office.

First, the mistakes. Last month, her government announced tax cuts of 45 billion pounds ($50 billion) without actually saying how the government would pay for them or seeking independent analysis on how it would affect borrowing and debt.

Markets reeled at the news of the mini-budget, the pound plunged, the Bank of England intervened to stabilize the bond market after sharp increases in bond yields threatened some pension funds, and Truss fired her finance minister.

Another no-no: The manner of her resignation — her explicit lack of accountability and/or reference in her speech to the effect of her “mini-budget” on U.K. markets —may not be the best way to leave a job after crashing and burning so spectacularly.

Erik Bernstein, president at Bernstein Crisis Management, tells people to address the problems up front when interviewing for another job. He says you should “own” the problem and describe how the problems could have been fixed.

“It’s good to know when it’s time to go: Arguably, staying in office would be bad for the Conservatives, for the U.K., which does not need a lame duck prime minister, and for Truss herself.”

He preps such clients “to be able to answer the worst questions anyone could throw at them and respond with confidence, compassion, and proof they are more than competent enough to be trusted with a new role.”

Truss had no real choice. “Leadership requires the ability to persuade, coral and move people, and that is incredibly hard is nobody expects you to be around in a few months,” said Nicholas Bloom,  an economics professor at Stanford University.

“Liz Truss was correct to step down,” he said. “Once the talk is about when rather than if you resign the time to resign becomes now so that a new leader can be chosen and the party can move on.”

“I came into office at a time of great economic and international instability,” Truss said. “Families and businesses were worried about how to pay their bills. Putin’s illegal war in Ukraine threatens the security of our whole continent.”

Truss tried to put a brave face on a bad situation. “We delivered on energy bills and on cutting national insurance, and we set out a vision for a low-tax, high-growth economy that would take advantage of the freedoms of Brexit,” she added.

About those freedoms: Recent research by the U.K.-based think tank, the Resolution Foundation and the London School of Economics, said Brexit delivered a depreciation-driven inflation spike, increasing the cost of living for households.

U.K. inflation is running at about 10% year-over-year, more than the roughly 8% rise in the U.S. Truss, perhaps, was not entirely accurate in her categorization of Brexit — Britain’s exit from the European Union — as a journey to newfound freedom.

Bloom measures uncertainty in the U.K., and found that it’s at 10 times the normal level. “The Brexit vote was a decision to leave the EU without any plan about what came next, and without a plan the Government lurched from crisis to crisis,” he said.

When it’s time to go

It’s good to know when it’s time to go: Arguably, staying in office would be bad for the Conservatives, given Truss’s low approval rating. The U.K. also does not need a lame duck prime minister at a time of economic upheaval.

Writing in the Harvard Business Review, John Coleman, said there are good times to quit your job. They relate to Truss. Among the reasons: It no longer encourages your growth (tick) and you are actively looking for ways to avoid your job (tick).

On Monday, Truss was a no-show during parliamentary questions as to why she sacked her finance minister. Penny Mordaunt, the leader of the House of Commons, told the opposition: “The prime minister is not under a desk.” Not literally, anyway.

Other signs that it’s time to quit, per Coleman’s guide: You regularly approach work with exhaustion, burnout, or dread (see above), your workplace has become unhealthy (Truss had a 10% approval rating, the worst of any prime minister.)

“Don’t look back. Hold no resentments. Let go of any grudges. Don’t send a scorched-earth email. Even if you believe you have burned all of your bridges, you may have one or two left. ”

Finally, Coleman said if you are developing bad habits (tick), leave. The Guardian likened Truss’s “bad habits” to her predecessor Boris Johnson, citing “Johnson-like tendency to rush into new policies and be vague or inaccurate with facts.”

So what happens next after quitting? Don’t look back. Hold no resentments. Let go of grudges. Don’t send a scorched-earth email. Even if you burned all of your bridges, you may have one or two left. Don’t take a match to those either.

You are not your job. Take some time to enjoy the view. If you don’t have a view, enjoy observing the lives of others next door. Life does go on. You don’t have to make any hasty decisions about what to do next. Neither does Liz Truss.

“Not all quitting is created equal, and if you’ve climbed up high enough, your quitting options often come with a selection of ways of saving face,” Tessa West, a New York University social psychology professor and author of “Jerks at Work.”

One of West’s colleagues was recently asked to leave a senior academic position. Her going-away flowers came with a note that said, “We would love to give you the option of controlling the narrative around your exit.” West says, “Who gets that?”

When a new life awaits

Assuming you have enough cash in the bank, this could be an opportunity to write that book, take a vacation, return to education, or even take up hobbies that you enjoyed doing before you got caught up in the rat race. Tennis or pickle ball, anyone?

“When you see the writing on the wall, it’s a good idea to get out,” says career counselor Lynn Berger. “It’s all about the added value you’re going to bring to the new role and the accomplishments you’ve had in the past.”

If you do need to get a jump on the next job right away and you were only in your job for a matter of months, Berger recommends leaving it off your résumé. Too many awkward questions to answer. If it’s more than six months, tell the truth.

Quitting, even in a public manner, is better than “quiet quitting” and remaining in a job you don’t like and believe to be toxic. Quiet quitting — doing as little as possible while getting paid a full wage is bad karma, and bad for your self-esteem.

“We tend to cling to external causes in situations like this rather than attributing our failures to ourselves, which makes it hard for us to nail down the precise causes of them. And truth be told, there’s often a confluence of causes,” West says.

“Quitting, even in a public manner, is better than ‘quiet quitting.’ Doing as little as possible while getting paid a full wage is bad karma, and it’s also bad for your self-esteem.”

Truss could have hung on longer, perhaps, hoping to turn her government’s ailing fortunes around. During a hostile Prime Minister’s Question Time on Wednesday, she declared somewhat portentously, “I’m a fighter, not a quitter.”

Quitting is not a dirty word. It’s not an act of failure, it’s an act of empowerment. It tells the world (and you) that you are bigger than your job, you are more than a clockwatcher, and your happiness, healthy and life come first.

Instead of asking yourself, “Why did I fail?” West says ask yourself, “What are my goals for my next job, and what, precisely, will I need to succeed?” And, yes, that could include support like an executive assistant, good boss and/or a stronger team.

“Sometimes it means having a boss who clearly understands the difference between skills you don’t have but can figure out, and those that you really need hands-on training for,” she adds. “And sometimes it means a clear feedback plan.”

Finally, there will come a time when you will be able to laugh at the situation and/or hopefully yourself, and learn some lessons. Anthony Scaramucci’s tenure as President Trump’s White House communications director lasted 10 days.

On Thursday, he tweeted: “Liz Truss lasted 4.1 Scaramuccis.” Laughter helps to relieve stress and release tension. An unhappy job + time = comedy. Or, at the very least, it should provide some much-needed perspective.

And for your next job? Know what you’re getting into. Don’t take your colleagues by surprise with big changes like Liz Truss did with her tax-cuts-for-the-rich “mini budget.” Take a lesson from Truss’s short-lived premiership, and be prepared.