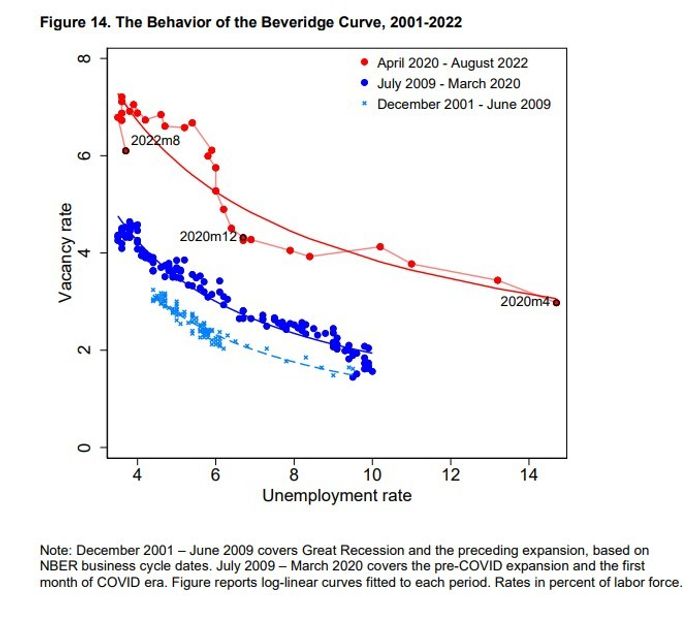 A new research paper tries to explain why the economics profession got it wrong on inflation. Read More...

Most of the economics profession, from the Federal Reserve on down, got it wrong on inflation. So the question of why they were wrong is an important one, not just for finger-pointing but for the future of price developments.

A new research paper circulated by the National Bureau of Economics Research — from self-professed Team Transitory members — tries to explain what happened.

The authors, Laurence Ball of Johns Hopkins University, and Daniel Leigh and Prachi Mishra of the International Monetary Fund, say part of the forecasting error came from big shocks like the disruption of supply chains and Russia’s invasion of Ukraine. Another mistake came from underestimating the pass-through effects from higher overall inflation to core. But those weren’t the only issues.

Most economists measured labor market tightness by comparing the unemployment rate to an estimate of the natural rate that would not boost inflation, like that calculated by the Congressional Budget Office. That focus just on the jobless rate obscured the impact of a big rise in the job vacancy to unemployed ratio, which shot up in late 2021. Most economists also assumed, wrongly, that the effect of unemployment on inflation was linear and fairly small.

The researchers admit they don’t know why the traditional relationship between the unemployment rate and the vacancy rate, called the Beveridge Curve, changed.

Work by authors including former IMF chief economist Olivier Blanchard and Treasury Secretary Larry Summers — who were among the few that had warned about the inflationary consequences of President Joe Biden’s stimulus before it was enacted — say companies are having a harder time “matching” with potential workers. Another study says there’s a decreased search intensity by unemployed workers.

The $1.9 trillion American Recovery Act, or what’s known as the Biden stimulus, started to heat up inflation in 2022, they say. Their model suggests inflation is between 25% and 40% higher than it would’ve been in the absence of the stimulus. And that, they say, is just the “lower bound” of the impact — they note Summers ascribes some of the supply-chain problems being a function of the ARA as well.

Assuming the change the Beveridge Curve doesn’t shift back to its pre-pandemic position will also lead to higher inflation forecasts going forward. “This means that the factors that have worsened the ability of the labor market to match workers to jobs, whatever they are, persist,” they say. In one scenario where it doesn’t shift, the inflation rate always stays above 4% by December 2024, and a peak unemployment rate of 4.4% — the Fed’s current guess — doesn’t bring the job market to a non-inflationary level. In a scenario where the curve does shift back, then core inflation as measured by median CPI ranges from 2.5% to 3.9%. The Fed’s inflation target of 2% at a PCE level is historically equivalent to a 2.6% target for median CPI, meaning that in that scenario, inflation also is unlikely to get back to the Fed’s goals.

A more pessimistic International Monetary Fund assessment that the unemployment climbs to 5.6% produces better inflation results, ranging from 2.3% to 4.8%. They also modeled what would happen in Summers’ scenario that reversing inflation will need two years of 7.5% unemployment. On their numbers, that would “robustly” bring inflation either below or just slightly above the Fed’s goal, with median CPI ranging from 1.6% to 3.3%.

The Fed’s two-day meeting on interest rates ends on Wednesday, with expectations of another 75 basis point hike.