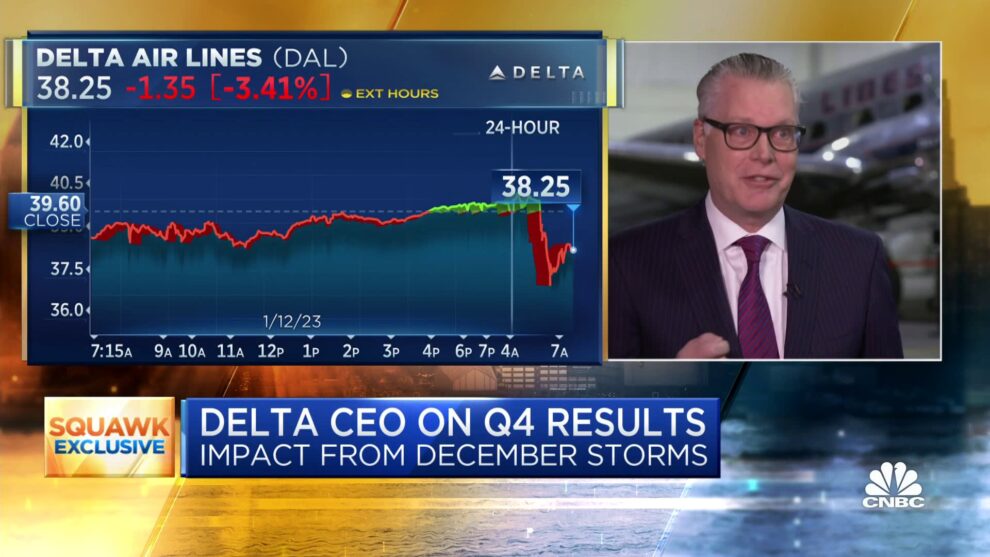 Delta and other airlines had said demand remained strong throughout the quarter. Read more...

Delta Air Lines fourth-quarter profit and revenue topped expectations on Friday, but shares fell on the carrier’s outlook for the first quarter.

Delta said it expects to earn 15 cents to 40 cents a share on an adjusted basis in the first quarter of 2023 and for its sales to increase 14% to 17% over the same quarter of 2019, with capacity down 1% from four years earlier.

But it said unit costs, stripping out fuel, will likely increase 3% to 4% from 2022, including for labor and rebuilding its network. Delta’s pilots union is reviewing a contract proposal this week that includes raises topping 30% over four years.

Delta reiterated its full-year 2023 earnings estimate of $5 to $6 a share.

The company’s shares were down more than 3% in early trading Friday.

Here’s how Delta performed in the fourth quarter, compared with Wall Street expectations based on Refinitiv consensus estimates:

The airline generated $13.44 billion in total sales for the final three months of 2022, 17% higher than the $11.44 billion it brought in three years earlier.

High costs ate away at some of Delta’s profits, but its net income still totaled $828 million, down from $1.1 billion in the same three-month period of 2019, but on 9% less flying than three years earlier. It was a sign of travelers’ willingness to continue booking, even at high fares, which more than made up for the increased expenses.

Delta CEO Ed Bastian said in a news release that the carrier “rose to the challenges of 2022, delivering industry-leading operational reliability and financial performance.”

Bastian told CNBC that demand for premium products has remained robust. In the airline’s release, it said that premium revenue, which includes seats in first class, rose 13% in the last quarter, 8 points above sales growth from the main cabin.

Delta has been cracking down on crowding in its luxury airport lounges, the result of strong demand for rewards credit cards and travelers with elite status. Next month it will raise the requirements for entry, and this week, said it is curbing employee access to Sky Clubs.

Airlines have largely been upbeat about the fourth quarter, despite concerns about a recession and weakness from some retailers and other businesses. On Thursday, American Airlines hiked its revenue and profit forecast for the period, sparking a broad rally in the sector.

That was even after severe winter weather disrupted flights coast to coast over the year-end holidays, prompting mass cancellations. Southwest Airlines in particular struggled to recover and said its meltdown could cost it more than $800 million. American and Southwest are scheduled to report on Jan. 26.

“There was a lot of customers looking for airlines given some of the Southwest challenges, and we got a benefit from that,” Bastian said in an interview with CNBC’s “Squawk Box.“

Correction: Delta had a fourth-quarter fuel bill of $2.8 billion, up 42% from 2019. An earlier version misstated the timing.