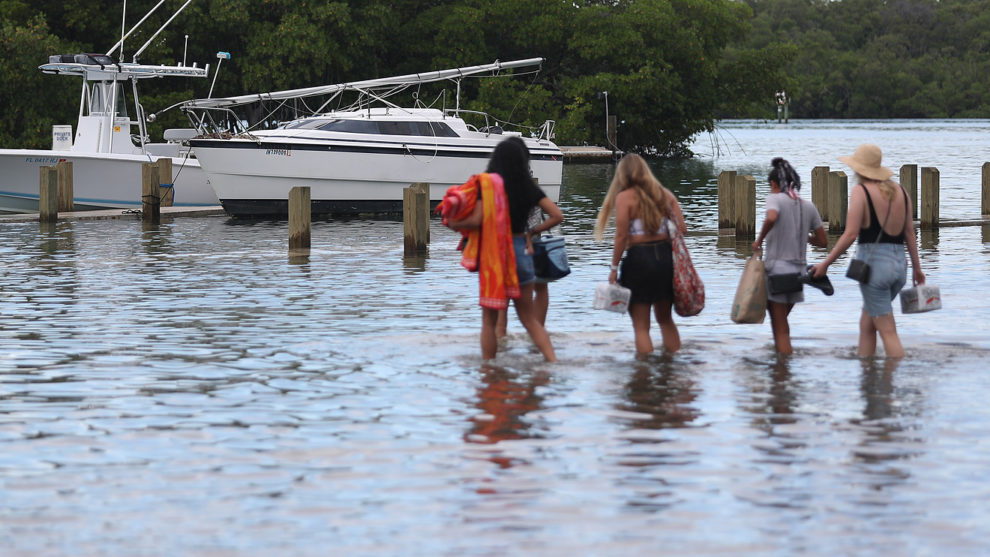 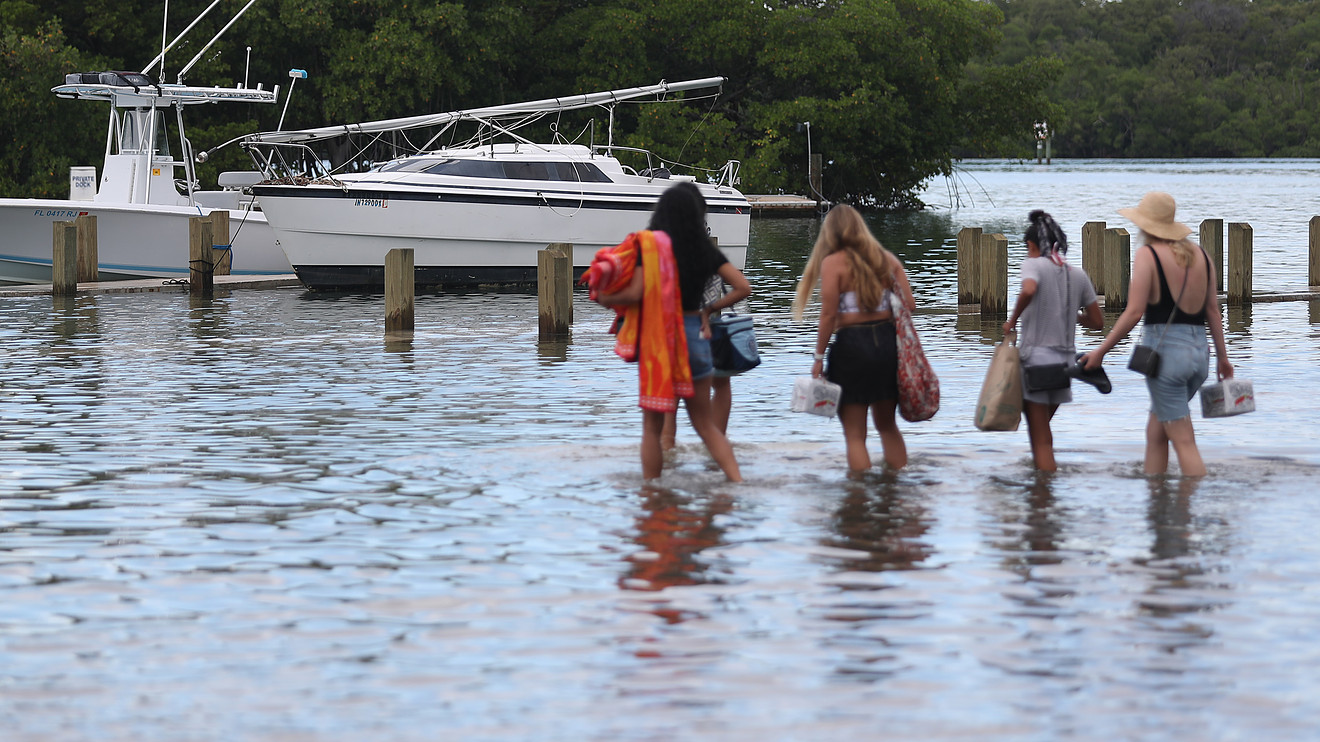 Hurricane Dorian is set to hit Florida on Monday or Tuesday just as Labor Day weekend draws to a close.

Travelers planning end-of-summer trips to the Sunshine State may want to rethink their vacation. As of Friday afternoon, Hurricane Dorian packed maximum sustained winds of 115 miles per hour, making it Category 3 storm based on the Saffir-Simpson scale.

The storm was more than 600 miles east of West Palm Beach on Friday afternoon and was expected to slowly make its way west over the coming days, during which time forecasters believe it will intensify. Current projections suggest the storm will make landfall on Florida’s Atlantic coast sometime late Monday or early Tuesday. From there, it is expected to turn northward and move up the Florida peninsula.

Much of the Bahamas is now under a hurricane watch. The storm is expected to dump up to six to 12 inches of rain across the Northwestern Bahamas and southeastern United States, with some isolated areas expected to receive 18 inches of precipitation. On the coasts, a storm surge of between 10 and 15 feet is expected.

Don’t miss: As Florida braces for Hurricane Dorian, here’s what you should pack in your ‘financial go-bag’

For travelers who are visiting Florida or planning to take cruises out of one of its many ports, Hurricane Dorian could cause a great deal of confusion as reports of damage come in and its track continues to shift. Here is what travelers need to consider if they were originally scheduled to visit the affected region in the coming days:

Delta DAL, -0.03%  is waiving flight-change fees for flights between Sept. 1 and Sept. 4 through airports across the state of Florida, as well as Brunswick Golden Isles Airport in Georgia. Tickets must be reissued on or before Sept. 10, and rebooked travel must begin no later than Sept. 10. Travel that is rebooked after that date will not incur a change fee, but may incur a difference in fares.

From now through Sept. 4, Delta is also waiving all baggage and pet-in-cabin fees for flights to/from the following cities: Daytona Beach, Fort Lauderdale, Jacksonville, Melbourne, Miami, Orlando and West Palm Beach. Unaccompanied minors will not be allowed to fly to or from those same cities between Sept. 1 and Sept. 4.

JetBlue JBLU, -0.17%  is waiving change and cancellation fees for flights through Nassau scheduled between Aug. 30 and Sept. 2 and flights through multiple Florida airports between Aug. 30 and Sept. 3. Bahamas travelers may rebook for travel through Sept. 7, while Florida travelers may rebook through Sept. 10. Those whose flights are cancelled because of the storm may opt for a refund to the original form of payment.

Southwest Airlines LUV, +0.04%  warned customers that flights to/from Nassau, Bahamas and multiple airports across Florida could be disrupted by Dorian between now and Sept. 5. Customers affected by these disruptions can rebook in their original class of service or travel standby within 14 days of their original date of travel without paying additional charges. Those whose flights are canceled may request a refund.

United Airlines UAL, -0.45%  is waiving fees for those flying to, from or through multiple airports in Florida and the Bahamas between Aug. 29 and Sept. 4. For travel rebooked through Sept. 11, the change fee and difference in fair will be waived as long as the travel is in the same cabin and between the same cities as originally ticketed. After Sept. 11, customers will be on the hook for fare differences. Rescheduled travel must occur within a year of the date the ticket was issued.

People who planned to travel on Frontier Airlines to or from various airports in Florida between Sept. 1 and Sept. 4 may make one itinerary change without any fees being assessed. Travel must occur no later than Sept. 27, though the origin and destination cities can be changed. Those whose flights are cancelled can request a refund.

Alaska Airlines ALK, -0.40%  is waiving change fees and fare differences for travel originally set for the days between Sept. 1 and Sept. 4 to or from three cities in Florida — Fort Lauderdale, Orlando and Tampa — and Charleston, South Carolina. The new itinerary must be booked in the same cabin and completed before Sept. 11.

American Airlines AAL, -0.04%  is waiving change fees for flights between Aug. 29 and Sept. 4 to/from a range of airports in Florida. Change and cancellation fees will be waived for these flights if the travelers can fly any time from Aug. 29 and up to 331 days after the original ticket date. Changes must be booked by Sept. 4. Differences in fares may apply. For those who cannot reschedule, they can cancel their planned trip and apply the unused value toward the purchase of a new ticket within a year of the original ticket date.

Some airports in Florida, including Orlando International Airport, are already announcing that they plan to close in advance of the storm.

The latest update will always be pinned to top of our page. Travelers: Check with their airline for flight updates. pic.twitter.com/yIotItTGQl

A number of cruise lines with planned voyages coming into Florida or leaving from the state’s Port Canaveral and Port Everglades cruise hubs are making changes to the preplanned itineraries. Cruise travelers should regularly check the various companies’ websites in the coming days to determine if and/or how their trips will be affected. Depending on damage to ports in Florida, ships already at sea may remain at sea longer than originally planned, and upcoming voyages may be cancelled.

Disney DIS, -0.42%  has so far altered the schedules for two of its upcoming voyages. The Disney Dream will depart as planned today from Port Canaveral, and its current voyage will now be a five-day sailing with an expected return on Sept. 4. The ship will visit Cozumel, Mexico, and Disney’s Castaway Cay in the Bahamas, depending on Dorian’s path. Guests who no longer want to go on this cruise were given the option to rebook by 12 p.m. on Friday. They must choose a new sail date by Oct. 31 — they won’t be charged change fees, but could be expected to pay the price difference for the new voyage.

The Disney Dream’s subsequent Sept. 2 sailing will as a result be delayed until Sept. 4 and turned into a two-night sailing, with an expected return on Sept. 6. The ship is expected to visit Castaway Cay unless Dorian creates severe damage. Travelers who still choose to go on this voyage will receive a 50% refund of their voyage fare and a $250 onboard credit per stateroom. Those who rebook must notify Disney by Sept. 1 at 12 p.m. and will have until Oct. 31 to rebook. These guests won’t be charged a change fee, but may be expected to pay more if the price for the new sailing is different.

The Norwegian Sky NCLH, +1.04%   sailing that began on Aug. 25 will still visit Cozumel, Mexico, on Aug. 30, but will not return to Miami on Sept. 1 as originally planned. Instead, the ship will overnight in Cozumel until Sept. 1. Guests will have the option to conclude their cruise their and arrange transportation home from Mexico or remain on board. Those who do choose to end in Cozumel will receive a 25% future cruise credit.

The Norwegian Sky sailing that began on Aug. 26 will no longer call to Great Stirrup Cay in the Bahamas and instead will return to Miami a day early on Friday, Aug. 30. Guests will be able to remain onboard until 7 am on Aug. 31 and will receive a 20% refund of the original cruise fair paid.

The Norwegian Sun sailing that began on Aug. 29 will no longer make calls to Nassau, Great Stirrup Cay or Freeport in the Bahamas. Instead, the ship will stay at sea on Aug. 30 and then visit Cozumel on Aug. 31. The ship is scheduled to return to Port Canaveral on Sept. 2. Any excursions that are cancelled as a result of the cyclone will be refunded.

Carnival CCL, +0.18%  is actively monitoring the situation for a wide range of cruises that are leaving from or returning to ports across the state of Florida over the coming week. Travelers can sign up for text alerts to be notified regarding changes to their voyages. The following cruises have had itinerary changes:

• The Carnival Liberty will depart Port Canaveral as planned on Friday, Aug. 30, but will make a shorter call in Nassau.

• The Carnival Elation sailing that began Aug. 29 and the Carnival Liberty cruise may not be able to return to Port Canaveral on Monday as planned if the port is closed.

• The Carnival Victory departing Miami on Aug. 31 will now visit Grand Turk on Sept. 2, Half Moon Cay on Sept. 3 and Nassau on Sept. 4.

• The Carnival Victory, which departs Friday, replaced the call to Nassau with a visit to Key West on Saturday. It may not be able to return to Miami on Monday as originally planned depending on the track of storm.

• The Carnival Miracle will now operate as an 8-day sailing, departing on Saturday instead of Sunday from Tampa. Guests who can no longer travel on the cruise will be allowed to cancel and receive a future cruise credit.

Pre-purchased shore excursions that are cancelled will be automatically refunded.

Royal Caribbean RCL, +0.87%  said it’s “actively assessing the progression of Hurricane Dorian and adjusting itineraries to keep our ships, guest, and crew safely out of the storm’s path. We continue to share frequent updates with our guests on the status of our sailings via onboard announcements, guest letters, emails, and texts. The latest itinerary modifications are available at www.royalcaribbean.com/ItineraryUpdates and www.celebrity.com.”

Theme parks may shut down in advance of the storm

SeaWorld SEAS, +1.19%  , which operates SeaWorld Orlando, Discovery Cove, Aquatica Orlando and Busch Gardens Tampa Bay, has enacted its “Peace of Mind” policy, a spokeswoman said. Any vacation package or individual tickets booked for any of these parks can be rescheduled or refunded without cancellation or change fees.

A spokeswoman for Universal Studios Orlando Resort CMCSA, +0.20%  said that theme park operations and hours are continuing as normal at this time. If the storm is forecast to hit the Orlando area directly, the company has plans and procedures in place to modify operations.

If a tropical storm warning is issued by the National Hurricane Center or a state of emergency is declared within a week of a traveler’s arrival — either for the Orlando area or the guest’s place of residence — they can contact Universal Orlando to cancel or reschedule vacation packages, hotel accommodations or theme park tickets without any fees imposed. Those whose vacation packages included airfare may still be subject to certain fees assessed by the airline.

Travel website WDW News Today posted photos on Twitter TWTR, +0.38%  showing theme park employees taking down banners and apparently preparing the parks for the potential storm. In 2017, when Hurricane Irma hit the state, Walt Disney World made the rare choice to close its theme parks, water parks and Disney Springs shopping area. Guests stuck in the resort’s hotels during the storm were provided with meals and entertainment during the foul weather.

Those evacuating Florida meanwhile will have options to distract themselves as they wait out the storm. Wild Adventures Theme Park in Valdosta, Ga., said Friday that its offering free admission to evacuees during Labor Day weekend. To take advantage of the offer, consumers must show valid IDs from Florida counties under voluntary or mandatory evacuation orders.

This story will be updated as more information becomes available.

Bitcoin Tumbles: Is Another Cryptocurrency Bubble Getting Ready To Burst?