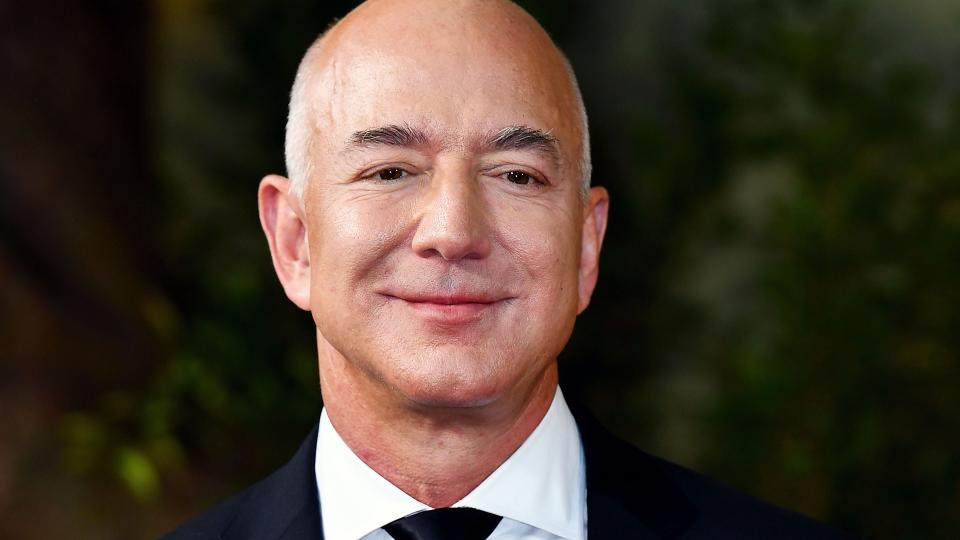 Jeff Bezos is an American businessperson, entrepreneur, philanthropist, media mogul and citizen astronaut who is the mastermind and former CEO/president of retail juggernaut Amazon. See: 22 Side Gigs... Read More...

Jeff Bezos is an American businessperson, entrepreneur, philanthropist, media mogul and citizen astronaut who is the mastermind and former CEO/president of retail juggernaut Amazon.

See: 22 Side Gigs That Can Make You Richer Than a Full-Time Job
Find: How To Get Free Gift Cards From Your Everyday Purchases
Take Our Poll: How Do You Think the Economy Will Perform in 2023?

Jeff Bezos’ Wealth Over the Years

Bezos has been a billionaire since 1999 — the year after Amazon went public — and he was the richest person in the world from 2017, when he surpassed Bill Gates, through 2020.

In early January 2021, Bezos was overtaken by Tesla and SpaceX CEO Elon Musk as the wealthiest person on the list, and the two swapped places from time to time. As of Jan. 10, 2023, though, Bezos is the fourth-wealthiest person on Earth, with Musk second. Bernard Arnault of France and his family, who own a variety of luxury retail brands, top the list, according to Forbes, with a net worth of $204.1 billion.

Bezos was born Jeffrey Preston Jorgensen to Jacklyn and Ted Jorgensen on January 12, 1964, in Albuquerque, New Mexico. His parents divorced when he was a toddler, and his mother married Miguel Bezos. Miguel adopted the boy, who then took on the surname Bezos. Jeff grew up in Houston and had a keen interest in science. When he was about to enter high school, his family moved to Miami. He was an excellent student and the valedictorian of his class.

Upon graduation, he had the pick of many plum opportunities, but he chose to work for Fitel, a financial technology firm. He migrated into banking and got a job at the hedge fund D.E. Shaw & Co. By the time he left the firm four years later, he had ascended to the position of senior vice president.

It was at D.E. Shaw & Co. that Bezos got the idea to transition to the world wide web for his next business venture — an online bookstore he named Amazon. There, he also met aspiring novelist MacKenzie Tuttle. The pair were married in 1993 and share four children. They divorced in 2019, and it has been reported that the split was amicable.

On July 16, 1995, Seattle-based Amazon opened its virtual doors and started selling books online. Bezos himself helped to package up the orders and deliver the boxes to the post office for shipping.

After growing from its start as a bookseller, Amazon expanded to offer a slew of products and services to customers around the globe, which helped it surpass $100 billion in annual sales in record time. Today, the company holds a market capitalization of $914.6 billion, according to the Nasdaq exchange. That’s down more than $500 million in 11 months.

Bezos presently owns just less than 10% of outstanding Amazon shares, according to Forbes. When he and his wife divorced, she received one-fourth of his then-16% stake in Amazon. Forbes reported in November that to that point in 2022, he had donated more than $400 million of stock to nonprofit organizations.

At the end of the day, Bezos amassed astounding wealth while using Amazon to disrupt virtually every consumer industry.

Bezos launched his next passion project, Blue Origin, a business geared toward human space flight, in 2000.

In 2013, Bezos became one of the largest players in the news industry after he purchased The Washington Post for $250 million.

In March 2017, Bezos purchased Dubai-based online retailer Souq.com for $580 million, CNBC reported. That gave him an opportunity to expand Amazon to the Middle East.

In 2017, Bezos also purchased the Whole Foods grocery store for $13.7 billion, which paved the way for Amazon to revitalize its food delivery service, Amazon Fresh.

Bezos also has major investments in companies other than his own, favoring startups with the potential for huge returns on his investment. Forbes reports that he invested an estimated $250,000 in Google – which now falls under parent company Alphabet – when he met founders Larry Page and Sergey Brin in 1998. Yahoo reports he has invested in more than 95 companies and startups, including Airbnb, Workday and Uber.

Jeff Bezos stepped down as CEO of Amazon — the company he founded that made him a global figure — on July 5, 2021. He chose that day for sentimental reasons. It was, after all, the 27th anniversary of the day the company was incorporated in 1994. He holds the role of executive chair.

Since his retirement as Amazon’s CEO, Jeff Bezos has been spending time sending rockets into space, including ships not only holding the iconic billionaire himself but celebrities as well. His company, Blue Origin, previously sent William Shatner, the legendary Captain Kirk, as well as “Good Morning America” host Michael Strahan, into orbit.

Jeff Bezos has not always been viewed as the most generous billionaire, as he has donated less than others, such as Warren Buffett and Bill Gates, to charitable organizations and causes. Bezos also has refrained from participating in The Giving Pledge. Ex-wife MacKenzie Scott committed to the initiative, in which the world’s wealthiest people pledge to donate half their wealth either throughout their lifetime or after their death. Gates, Buffett, and about 235 other individuals and couples have signed The Giving Pledge.

However, in 2020, Jeff Bezos made the single largest charitable donation of the year, giving $10 billion to launch the Bezos Earth Fund, an organization that supports nonprofits working to fight climate change. Bezos also made a $100 million donation to the Feeding America COVID-19 Response Fund.

He said in an interview with CNN last November that he plans to give away the majority of his wealth during his lifetime without going into details.

MacKenzie and Jeff Bezos purchased an estate in the Medina neighborhood of Seattle in 1998. It consisted of two homes totaling nearly 29,000 square feet. Bezos purchased the neighboring property, which consisted of five acres and a 24,000-square-foot house, in 2010. The compound is believed to be Bezos’ primary home, post-divorce.

Bezos added a Texas ranch to his portfolio in 2004. Located near Van Horn, the property serves as the base of operations for Blue Origin, according to Architectural Digest.

Bezos owns estates in Beverly Hills, California, worth more than $200 million. He owns adjoining mansions purchased in 2007 for $24.45 million and in 2017 for $12.9 million, according to Architectural Digest. In 2020, he paid $165 million for a historic mansion previously owned by David Geffen.

His portfolio also includes a number of properties in Manhattan. Bezos added four Manhattan apartments in 2019 and 2020 to two he already owned. The more recent acquisitions include a 10,000-square-foot penthouse overlooking Madison Square Park.

In 2021, Bezos paid $78 million for a 14-acre compound in Hawaii, Architectural Digest reported, bringing the total value of his real estate portfolio to at least $578 million.

Along with his impressive real estate portfolio, Bezos owns private jets — including two Gulfstream aircraft — for his personal travel needs. His limited liability company, Poplar Glen, paid $5.5 million for a hangar at Seattle’s Boeing Field to store his jets in 2015.

Bezos soon will take possession of a $500 million superyacht he commissioned that was built in the Netherlands. It will be the largest sailing yacht in the world at 417 feet long and will cost $25 million per year to maintain, Elite Traveler reported. The name of the yacht is “Koru,” a word from the Maori culture that translates to “new beginnings,” according to the Daily Mail.

Jennifer Taylor and Jami Farkas contributed to the reporting for this article.

This article originally appeared on GOBankingRates.com: How Much Is Jeff Bezos Worth?