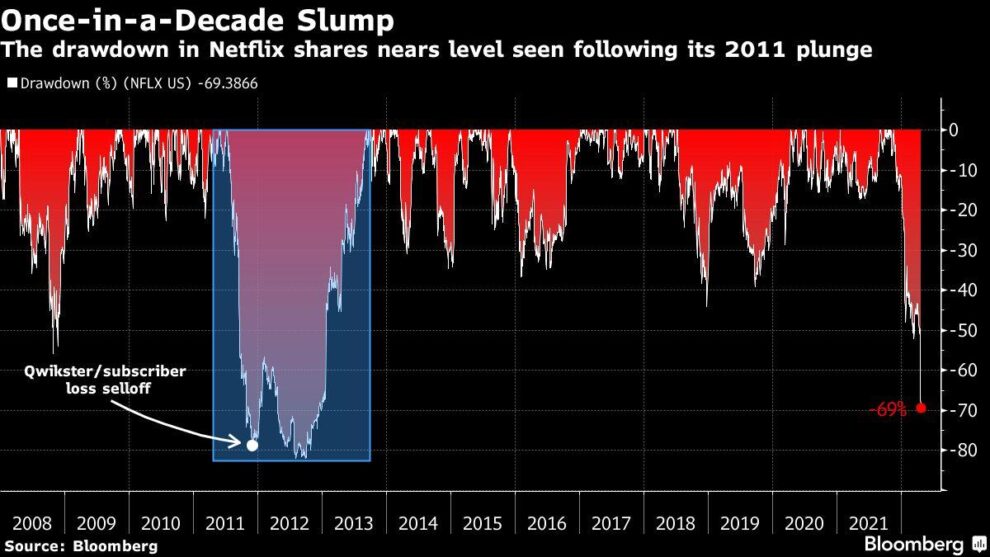 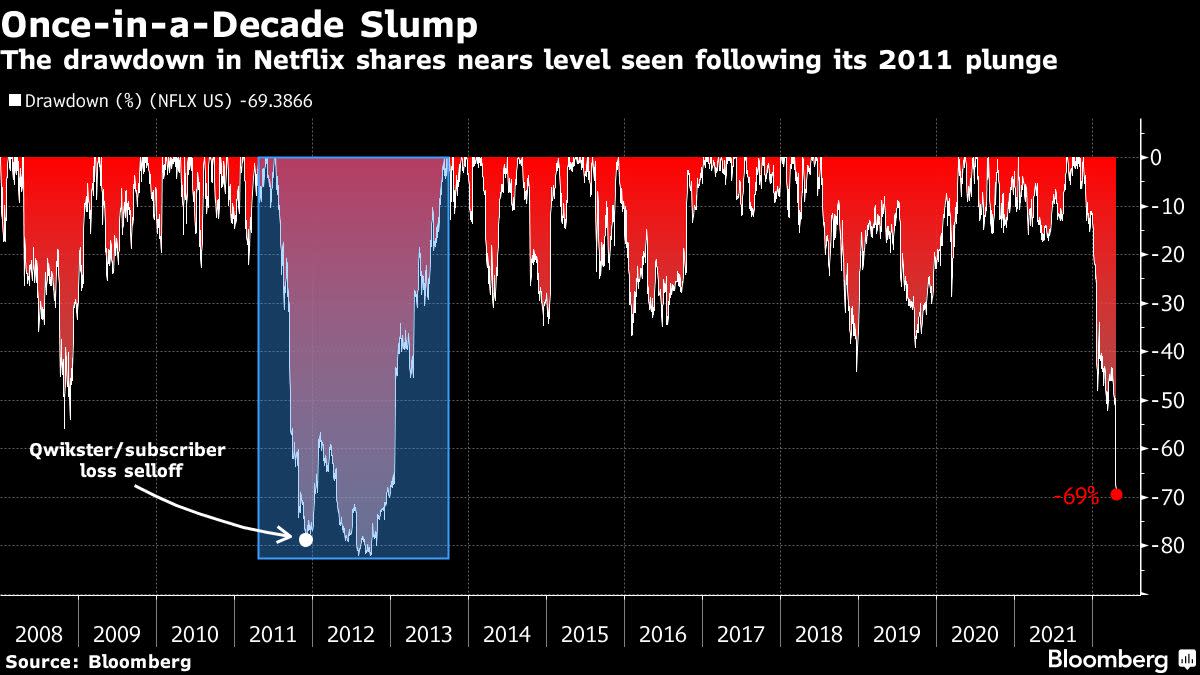 (Bloomberg) — The collapse in Netflix Inc. shares last week sent the company to the bottom of the S&P 500 Index and left investors on edge about other large technology and internet companies reporting quarterly earnings in the coming days.

The streaming-video giant is down 64% this year after a shockingly weak subscriber outlook triggered a 35% drop in Wednesday’s session — its steepest one-day loss since 2004. But sharp swings are not completely novel for Netflix, one of the so-called pandemic winners, which rallied in the aftermath of global lockdowns.

Here’s a look at how Netflix has evolved in four charts:

Netflix has surged about 20,000% since going public in 2002, making it a massive outperformer relative to the S&P 500 Index, which is up less than 500% on a total-return basis over that same period. But the company has experienced a number of slumps over its lifetime, notably in 2011, when it was accelerating its transition into streaming.

The company briefly pursued a strategy of splitting its streaming service from its DVD-by-mail program, which was to be renamed Qwikster. Such missteps contributed to it losing subscribers, the last time it would do so until the most recent quarter.

Netflix subsequently undertook a daring and expensive push into original programming that paid off in 2013 — when it became the first streaming platform to win an Emmy award.

While the stock has posted steady gains since the end of 2011, with 2014 the only negative year for the shares over that period, growth accelerated with the onset of the pandemic in early 2020. The company saw millions of new subscribers as audiences stayed indoors and binged on shows like “Tiger King” and “The Queen’s Gambit.” Shares gained nearly 70% over the course of 2020 and rose another 11% in 2021, their fifth straight year with a double-digit advance.

Earlier this year Netflix gave a disappointing outlook for new subscribers, sparking a 22% decline. And with the latest disappointing guidance, many are questioning the company’s growth prospects. At least 15 firms downgraded the stock, contributing to a drop of almost 70% off a November record, making for its biggest drawdown in years.

Investors are now bracing for earnings reports from the rest of the FAANG complex. Alphabet Inc. reports on April 26, Facebook parent Meta Platforms Inc. is slated to release results on April 27, with Amazon.com Inc. and Apple Inc. expected the following the day.