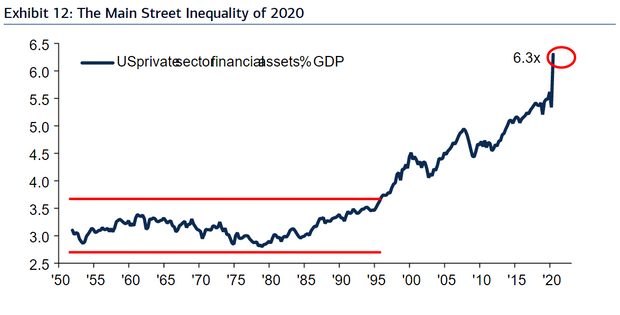 As stocks staged a huge rebound from their lows in March, when the coronavirus pandemic threw the economy into recession, the gap between the wealthy and the poor extended a widening trend to historic proportions. Read More...

The chasm between the haves and the have-nots, combined with racial discrimination, in America were placed under greater scrutiny in 2020, as the COVID-19 pandemic raged, infecting millions of citizens and putting intense pressure on mom-and-pop businesses.

But as stock market indexes staged a huge rebound from the lows seen in March when the pandemic first hit, the gap between the wealthy and the poor extended an already widening trend to historic proportions.

A report via BofA Global Research published on Friday notes that a measure of the differential between gains in financial assets and the health of the economy hit a record at 6.3X in 2020.

U.S. stocks enjoyed a nearly unrelenting surge this year from the March lows, when the coronavirus pandemic threw the economy into recession, with the Dow Jones Industrial Average DJIA, -0.63% and the S&P 500 index SPX, -0.65% both registering gains from the spring of at least 60% and the Nasdaq Composite COMP, -0.25% surging over 85%.

Indeed, the global epidemic has fattened the wallets of the richest of the rich, with an estimate by Business Insider recently showing that a number of prominent billionaires grew their wealth by over a half a trillion dollars during the coronavirus pandemic, with Amazon.com’s AMZN, -1.45% Jeff Bezos at the top of that list along with Tesla Inc. TSLA, +2.90% CEO Elon Musk.

That wealth surge came even as more than 20 million Americans, near the peak of the pandemic in the U.S. in the spring, were at least temporarily put out of work as business lockdowns and social-distancing measures were implemented to limit the spread of COVID-19.

It isn’t the first time that the inequality gap has notably widened during an economic crisis, as the chasm between the rich and the poor expanded during the 2008 financial crisis also.

BofA’s short note doesn’t offer any solutions for the wealth gap, but it is a topic that has been increasingly raised as a significant drag on the economy.

A report by Moody’s Investors Service said that income and wealth inequalities, including wide disparities in incomes between racial groups, are keeping the U.S. economy from reaching its potential and pose ongoing “social risk.”

This inequality is more pronounced in the U.S. compared with other countries, the Moody’s report said.

A separate report from Citigroup indicated that the cost of this disparity isn’t insignificant, estimating that the overall tab for not closing racial gaps on wages, education, housing and investment runs to $16 trillion.

“Black persons, in particular, appear to have suffered greater job losses amid government ordered shutdowns; found themselves in industries that are essential but low paying; possessed more pre-existing factors leading to COVID-19 mortality; owned businesses that closed permanently or were unable to access Paycheck Protection Program loans; and reported elevated rates of food, income, and housing insecurity amid the crisis,” Citi’s analysts said.

The Margin: Here’s how to get your ‘Cyberpunk 2077’ refund
Aurora Cannabis stock falls after BMO analyst turns bearish
Comment

Amazon Workers in Alabama May Vote to Unionize: Reports

Target Reports Earnings on Wednesday. Here’s What to Expect.