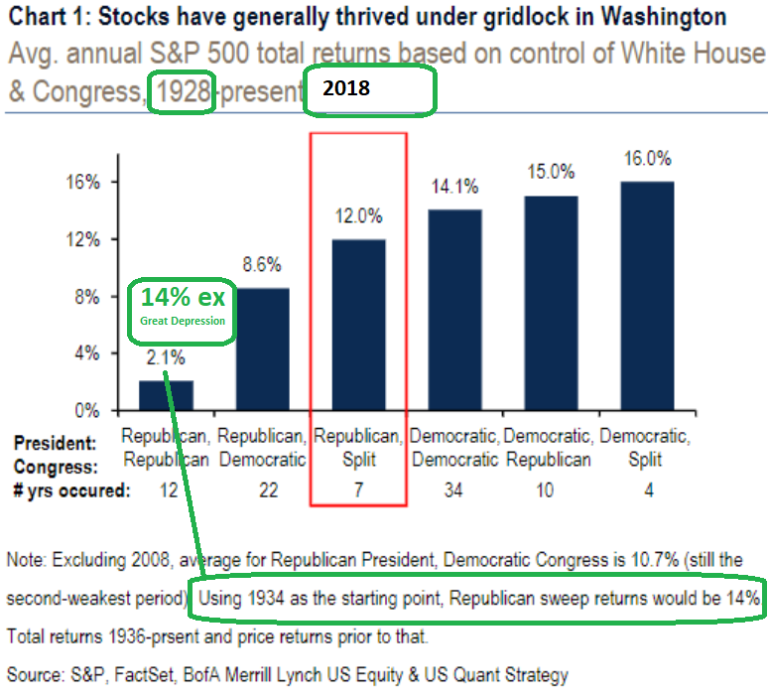 “The punchline is (for the stock market) — that it does not matter which party wins — so long as no one wins COMPLETE power (sweep of Executive, Senate and House),” Thomas Hayes, founder and chairman of Great Hill Capital, wrote in a blog post.

He used this chart to show how, historically, a Democrat in the White House with a split Congress has delivered the best returns. A Republican sweep has been by far the worse scenario, though, as Hayes highlighted, that has a lot to do with the Great Depression:

While those numbers, ex-Great Depression, aren’t really all that troubling in any of the cases, this election could have profound consequences on the stock market, particularly if Democrats sweep and manage to hike the corporate tax rate, Hayes suggested.

Republicans have promised to continue the tax cuts and perhaps even introduce more on capital gains and for the middle class, he said. Democrats, on the other hand, are committed to raising the corporate tax rate from 21% to 28%. That is where the market gets in trouble.

“In the 34 years (since 1928) that Democrats have ruled with absolute power (sweep of Executive and Legislative Branches), you did not have such a material CORPORATE TAX INCREASE — imminent upon election,” Hayes wrote. “Democrats have consistently run on higher individual tax rates for the rich, but NOT higher corporate tax rates – as we had very high corporate tax rates relative to the rest of the world — until the change under the current administration.”

As Goldman Sachs US:GS recently calculated in a note, an increase in the corporate tax rate in the event of a Democratic sweep, which is becoming increasingly likely, would slash S&P 500 earning estimates for 2021 by $20 a share to $150 from $170.

“If Goldman is correct. it means we are currently trading at 22.5x 2021 earnings — which is unsustainable,” Hayes said. “Furthermore, GROWTH expectations would decline as the money companies save from paying the government is invested into growth, hiring, R&D and/or circulated to owners as dividends/buybacks. This would not be the case if the tax rate was increased.”

Using a formula with an earnings multiple of 15.3x — the 10-year average multiple (P/E) that was in place when the corporate tax rate was higher — along with $150 earnings on the S&P, Hayes estimated that the Dow Jones Industrial Average US:DJIA would drop below 19,000.

For a retirement account of about $2,000,000 — a recent Charles Schwab survey showed that to be the average targeted figure among the younger generations — that would mean a “devastating” hit of more than $600,000, according to his calculations.

“The expected drop in equity value has nothing to do with political party,” Hayes said. “The difference this time is that we are starting with the most favorable tax/business environment that we’ve ever had. When that policy is changed it will have a deleterious impact on stock market value.”

The best an investor can hope for in this climate, he explained, is that both parties have enough power that there are no changes on the corporate tax/regulation front.

So what’s a liberal to do?

“My strong suggestion is that if you vote Democrat for the Executive Branch (and you like your net worth), either don’t vote for the Senate and House, or vote the other party as a check on power,” Hayes said. “IF the tax policy changes as proposed, so will everyone’s retirement account value.”

Meanwhile, the market continues to hold up nicely. The Dow was down slightly Thursday, but both the S&P 500 US:SPX and Nasdaq Composite US:COMP were in the green. 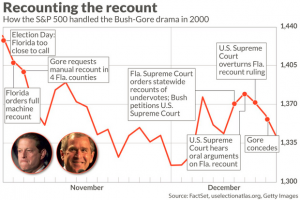 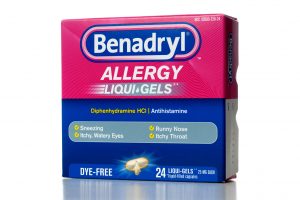 Mutual Funds Weekly: These money and investing tips can help your financial portfolio through any late summer storms
‘Unless we do this together, we’re not going to get this under control’: Fauci says U.S. can learn from other countries to beat COVID-19
Comment

2 Financial Stocks on My Radar