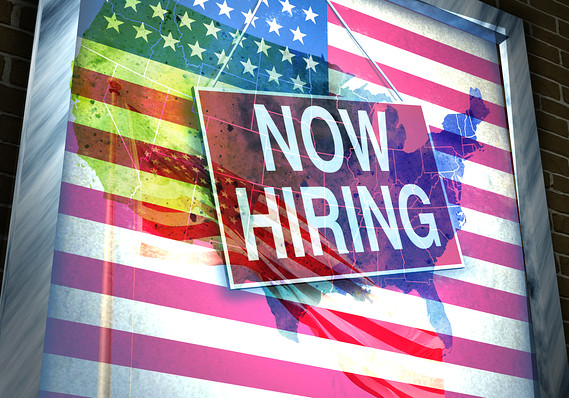 CareerBuilder crunched data on the lucrative professions that are growing at a faster rate than the national average. Read More...

The economy had about 501,000 fewer jobs as of March 2019 than the Bureau of Labor Statistics initially calculated in its survey of business establishments, the Bureau of Labor Statistics said this week. That’s the largest revision since the waning stages of the Great Recession in 2009. Leisure and hospitality employment was reduced by 175,000, business services by 163,000 and retail by 146,400.

So what are the highest paid, most in-demand jobs in your state? Software developers, physical therapists and physician assistants crop up frequently among the highest-paid and fastest-growing jobs in every U.S. state, according to a new analysis by CareerBuilder. The site analyzed government data to project the careers most likely to be lucrative and in demand. Most of these jobs require some level of college education.

Software developers typically require a bachelor’s degree and computer-coding skills such as Java, JavaScript, SQL, C Sharp, Cascading Style Sheets and NET Framework. They had a median pay of $105,590 per year or $50.77 per hour last year, according to the Bureau of Labor Statistics; it says there’s a higher than average outlook for job growth (up 24% nationwide between 2016 and 2026).

CareerBuilder defined low-wage jobs as those paying $14.17 or less per hour and high-wage jobs as $23.24 per hour.

Physical therapists typically require a doctorate degree to practice. (You can read more about the different type of degrees required here.) They had a median pay of $87,930 per year or $42.27 per hour last year, the BLS said, and also have a higher than average outlook for job growth (a projected 28% increase nationwide between 2016 and 2026).

Another job that kept popping up: physician assistant. They had a median salary of $108,610 per year or $52.22 per hour last year, the BLS said, with a master’s degree as the typical entry-level educational requirement. Nationwide, the availability of these jobs is expected to soar 37% between 2016 and 2026. They assist doctors in surgeries and primary care, hospital wards and urgent care.

CareerBuilder defined low-wage jobs as those paying $14.17 or less per hour, middle-wage jobs as $14.18 to $23.59 per hour, and high-wage jobs as $23.24 per hour. The analysis is based on data from EMSI, a labor-market research firm, and focuses on 774 occupations classified by the BLS. It includes data for workers who are employed by organizations and those who are self-employed.

Home-health and personal-care aides were among the lowest paid, fastest-growing in every U.S. state and Washington, D.C. They require a highs-school diploma or equivalent. The median pay for these jobs was $24,060 per year or $11.57 per hour, according to the BLS. But the demand for these jobs is projected to increase by 41% between 2016 and 2026.

Home-health and personal-care aides were among the lowest paid, fastest-growing in every U.S. state.

A separate report by U.S. News & World Report that looked at work-life balance, salary and career development lists software developer as the No. 1 job. Alphabet GOOG, +1.86% GOOGL, +1.75%, Facebook FB, +2.10%  and Microsoft MSFT, +1.89%  typically hire these. Dentist, physician assistant and nurse practitioner were ranked next on the list.

More physician assistants does not necessarily mean more doctors. Office visits to primary-care physicians, doctors who often have an intimate knowledge of their patients’ history, declined 18% over a four-year period among adults under 65, according to the Health Care Cost Institute, a Washington, D.C.-based nonprofit that tracks trends and costs in the health-care industry.

Office visits to nurse practitioners and physician assistants spiked 129%, and there’s been a dramatic increase in physician assistants to fill that gap; meanwhile, primary-care physicians face additional time and expense managing their practice, and often have a fluctuating income and typically leave college with a six-figure student-loan debt.

Independent primary-care physicians who can afford the overheads and specialists based in hospitals typically have a system of physician assistants to conduct initial interviews with patients and carry out the required tests before the doctor checks in on the patient. (Approximately 65 million people live in “a primary-care desert,” according to the physician-search firm Merritt Hawkins.)

The No. 1 most expensive state to buy a home in — it’s not New York or California
Juul will make it harder for minors to buy its e-cigarettes
Comment

Analysts: These 3 FAANG Stocks Could Outperform in 2020

The Moneyist: My mother has always lived off others and now she lives off me — she needs to sort out her life before I snap