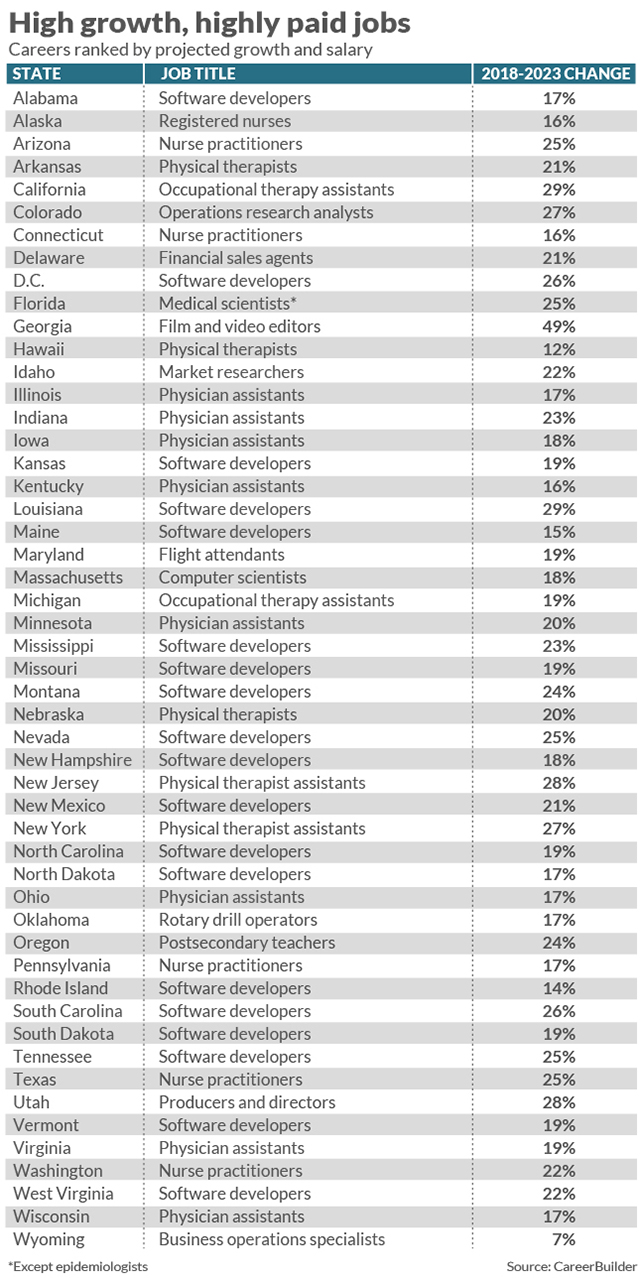 The worst paid profession improves the quality of life of millions of Americans and their elderly family members. Read More...

What are the highest paid, most in-demand jobs in your state?

Software developers, physical therapists and physician assistants crop up frequently among the highest-paid and fastest-growing jobs in every U.S. state, according to a recent analysis by CareerBuilder, a jobs and careers site. The site analyzed government data to project the careers most likely to be lucrative and in demand. Most of these jobs require some level of college education.

Software developers typically require a bachelor’s degree and computer-coding skills such as Java, JavaScript, SQL, C Sharp, Cascading Style Sheets and NET Framework. They had a median pay of $105,590 per year or $50.77 per hour last year, according to the Bureau of Labor Statistics; it says there’s a higher than average outlook for job growth (up 24% nationwide between 2016 and 2026).

CareerBuilder defined low-wage jobs as those paying $14.17 or less per hour and high-wage jobs as $23.24 per hour.

Physical therapists typically require a doctorate degree to practice. (You can read more about the different type of degrees required here.) They had a median pay of $87,930 per year or $42.27 per hour last year, the BLS said, and also have a higher than average outlook for job growth (a projected 28% increase nationwide between 2016 and 2026).

Another job that kept popping up: physician assistant. They had a median salary of $108,610 per year or $52.22 per hour last year, the BLS said, with a master’s degree as the typical entry-level educational requirement. Nationwide, the availability of these jobs is expected to soar 37% between 2016 and 2026. They work in surgeries and primary care, hospital wards and urgent care.

A separate report by U.S. News & World Report that looked at work-life balance, salary and career development lists software developer as the No. 1 job. Alphabet GOOG, +0.51% GOOGL, +0.49%, Facebook FB, +1.06%  and Microsoft MSFT, +1.84%  typically hire these. Dentist, physician assistant and nurse practitioner were ranked next on the list.

More physician assistants does not necessarily mean more doctors. Office visits to primary-care physicians, doctors who often have an intimate knowledge of their patients’ history, declined 18% over a four-year period among adults under 65, according to the Health Care Cost Institute, a Washington, D.C.-based nonprofit that tracks trends and costs in the health-care industry.

Office visits to nurse practitioners and physician assistants spiked 129%, and there’s been a dramatic increase in physician assistants to fill that gap; meanwhile, primary-care physicians face additional time and expense managing their practice, and often have a fluctuating income and typically leave college with a six-figure student-loan debt.

Independent primary-care physicians who can afford the overheads and specialists based in hospitals typically have a system of physician assistants to conduct initial interviews with patients and carry out the required tests before the doctor checks in on the patient. (Approximately 65 million people live in “a primary-care desert,” according to the physician-search firm Merritt Hawkins.)

Also see: My dying mother wanted to include her home-health aide in her will — is it too late?

The worst-paid job requires an enormous amount of responsibility and affects the quality of life — and, in many cases, the peace of mind — of millions of Americans and their elderly family members, the study added

Home-health and personal-care aides were among the lowest paid, fastest-growing in every U.S. state.

Home-health and personal-care aides were among the lowest paid, fastest-growing in every U.S. state and Washington, D.C. Only one state (Michigan) didn’t list home-health aide or personal-care aide as among the lowest paid, most in-demand jobs. (It did, however, list physical-therapy aides, in addition to nonfarm animal caretakers, and meat, poultry and fish cutters and trimmers.)

CareerBuilder defined low-wage jobs as those paying $14.17 or less per hour, middle-wage jobs as $14.18 to $23.59 per hour, and high-wage jobs as $23.24 per hour. The analysis is based on data from EMSI, a labor-market research firm, and focuses on 774 occupations classified by the BLS. It includes data for workers who are employed by organizations and those who are self-employed.

There’s probably never been a better time since the Great Recession to start looking. The U.S. economy is slowing down and added 130,000 new jobs in August, according to the latest jobs figures from the Bureau of Labor Statistics. The unemployment rate was unchanged at 3.7% in August and remained near a 50-year low. What’s more, more people entered the labor force in search of work, the government reported. The labor force participation rate was 63.2% in August, up slightly from 63% in July.

According to Max Richtman, the president and chief executive of the National Committee to Preserve Social Security and Medicare, a nonprofit that promotes the financial security, health and well-being of older Americans: Most seniors simply don’t even have the average $33,000 for in-home care. “Many middle-class seniors are forced to impoverish themselves by exhausting their hard-earned savings simply to qualify for Medicaid,” he said.

On average, U.S. nursing homes have one aide on duty for every 10 residents, based on estimates from Charlene Harrington, a professor emeritus at the University of California San Francisco. The typical ratio should be about one for every seven on day and evening shifts, she says. Some nursing aides say they have to care for 15 or more residents at a time. Here’s more advice on how to search for home-health aides amid a shortage, despite the relatively low pay.

Four out of 10 people will opt for paid care at home, and the median annual cost of a home-health aide hovers at $50,000, according to the U.S. Department of Health and Human Services’ Administration on Aging. Most people over 65 will need help with daily living tasks. Men will need such assistance for an average of 2.2 years, while women will need it for 3.7 years, the government data found.Getty Images/iStockphoto (Photomontage: Terrence Horan)DMAMBMCMDMEPREVIEWZBZBRZDZGZHZQZRZSZTZUPhoto

Canopy Growth Corporation (CGC) Gains But Lags Market: What You Should Know

Key Words: From mining lore to lode: Gold grows on trees in Australia