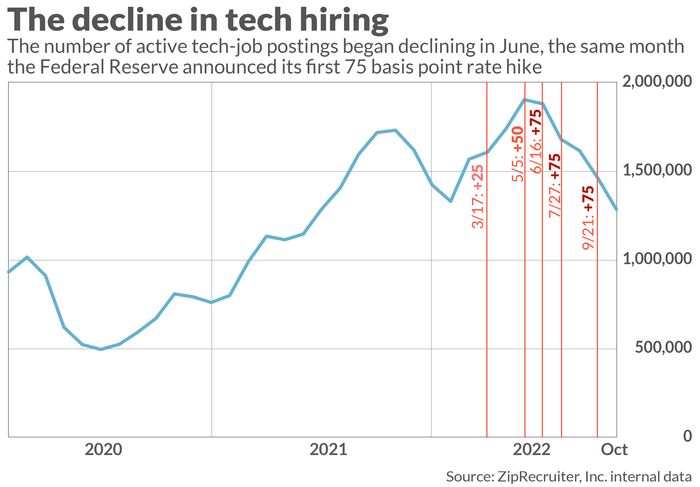 Shares of Meta, Alphabet Inc., Amazon, Microsoft and others have all suffered after a string of earnings that disappointed Wall Street. Read More...

How is the tech job market looking? Unfortunately, not so great.

Tech hiring took a dip after the Federal Reserve began aggressively hiking interest rates earlier this year, a new analysis from ZipRecruiter suggests. The Fed has raised rates six times this year, including four 0.75-percentage-point hikes in the key rate starting in June. That has pushed the short-term borrowing rate to a target range of 3.75% to 4%, making car loans and credit-card debt more expensive. It also makes it more difficult for high-growth stocks to deliver growth at the same rate as previous years.

The Fed’s actions have made it harder for the interest-rate sensitive tech sector, said Julia Pollak, chief economist at ZipRecruiter, a job search engine. The high interest-rate environment has made borrowing more expensive, and a strong dollar depletes the value of income from foreign markets. What’s more, high-growth tech stocks are vulnerable to rising interest rates, which reduce the value of future earnings. Shares of Facebook parent Meta Platforms Inc. META, -0.73%, Google parent Alphabet Inc. GOOGL, -0.72%, Amazon.com Inc. AMZN, -0.28%, and Microsoft MSFT, +0.01% have all suffered after a string of earnings that disappointed Wall Street.

The number of job postings for jobs in the technology sector on ZipRecruiter peaked in May with more than 1.9 million jobs, up 87% from February 2020 just before the coronavirus outbreak was declared a pandemic.  But hiring started declining in June around the same time as the Fed’s first 75 basis point hike (one basis point is equal to one hundredth of a percentage point, or 1% of 1%). In October, the number of job postings for tech jobs fell to 1.3 million.

The current trend deviates from normal times and from that of other non-tech roles as tech companies — in an effort to cut costs and prepare for a possible recession — appear less willing to spend time training and onboarding new staff, Pollak told MarketWatch. In normal times, the search for jobs is usually pyramid-shaped, with the most senior roles at the top of the pyramid, Pollak said. Employers tend to seek more junior workers, as they are cheaper, and fewer managers and intermediate staff.

Consumers are also feeling uncertainty about the economic outlook, according to the Federal Reserve Bank of New York’s survey of consumer expectations released this month. The share of people who expect higher jobless rates a year from now has reached a high not seen since April 2020. Consumer sentiment was also lower than expected in November, according to the University of Michigan’s latest U.S. Consumer outlook. These reports, plus a spate of hiring freezes and layoffs in the tech sector, have added to the recession drumbeat.

There has been a wave of layoff news in Silicon Valley in recent weeks. Amazon could lay off around 10,000 workers, representing around 3% of its corporate staff, according to the Wall Street Journal. Facebook parent Meta recently said it’s cutting 11,000 employees, or about 13% of its workforce, in the first layoffs in the company’s 18-year history. Tesla founder Elon Musk, who recently bought Twitter for $44 billion, quickly launched an effort to slash costs at the unprofitable company; that included 7,500 layoffs worldwide, or 50% of its global workforce.

(Andrew Keshner contributed to this story.)