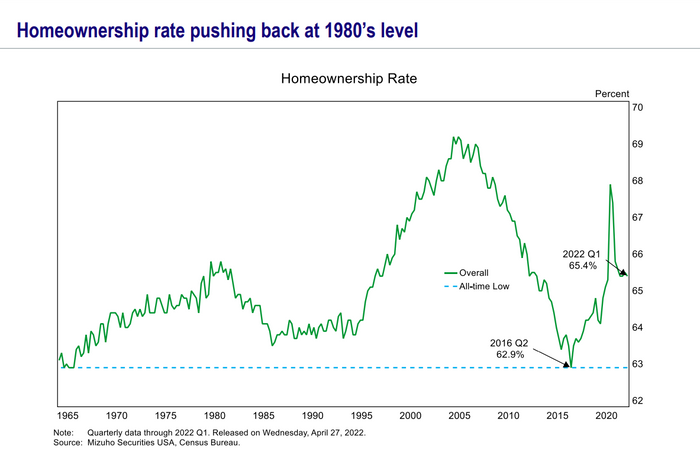 After digging out from a nearly 50-year low, homeownership in America is slipping back to levels from the 1980s, when mortgage costs were skyrocketing, according to Mizuho Securities. Read More...

High prices for everything from groceries to gas aren’t the only things making this year feel like a throwback to the 1980s.

After almost a decade of gains, homeownership in the U.S. also has slipped back to levels seen about four decades ago (see chart below), when former Federal Reserve Chairman Paul Volcker was waging a battle against high inflation that pushed the American economy into a recession.

Fed Chairman Jerome Powell repeatedly said he seeks to avoid sparking a recession while fighting inflation near a 40-year high, but also recently said that he can’t make any promises.

Mizuho analysts pegged the plunge in homeownership to 65.4% in the first quarter of 2022, a drop from a recent peak of nearly 68%, as part of their monthly report on economic data released Tuesday. For context, they pegged the all-time low at 62.9% in 2016, a level that matched the lows of the mid-1960s.

The slide in homeownership comes as a white-hot housing market has started to cool as the Fed has begun to dramatically raise its policy rate, and after many families raced to buy homes in the suburbs in the early months of the pandemic to better accommodate remote work.

The drop in homeownership, a cornerstone to building generational wealth, speaks to the affordability crisis gripping America, in part due to the historically low levels of vacant homes (about 1.1 million units) on the market, per Mizuho data.

Nationally, the mortgage delinquency rate fell to a new low of 2.75% in May, down from the long-term average of 4.31% for the same month, according to Black Knight data released Tuesday.

A key caveat of the current housing market has been the rise of institutional landlords in single-family rentals since the foreclosure crisis more than a decade ago, a subject of recent discussions on Capitol Hill.

Read: Institutional investors have bought hundreds of thousands of homes, many in Black communities. Critics say it’s creating a ‘generation of renters’

Wall Street has been providing institutional landlords with low-cost, nonrecourse funding to buy up homes as rentals in recent years. The U.S. housing market also has dramatically changed in the past 40 years for families, with the rise of the roughly $8.4 trillion mortgage-backed securities market becoming a key avenue of housing finance for borrowers.

The Fed has become a major force in the sector through its large holding of these mortgage bonds, with Wall Street watching closely as to how it navigates plans to dramatically reduce its footprint in a jittery market.

Stocks SPX, +0.16% mostly eked out gains Tuesday, a day ahead of the release of minutes from the Fed’s last rate-setting-committee meeting, which together with Friday’s jobs report will be monitored by investors. The benchmark 10-year Treasury yield TMUBMUSD10Y, 2.829%, used to price everything from consumer to corporate debt, fell to 2.808%, down from a multiyear high of 3.482% in June.

Read: The U.S. won’t officially be in recession if GDP shrinks again — and here’s why