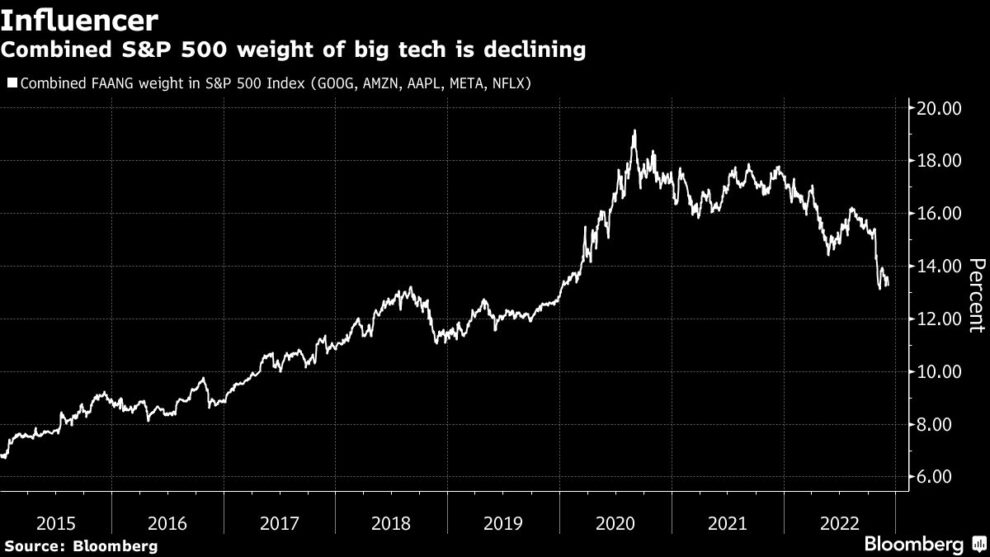 (Bloomberg) -- For some investors, this year’s rout in high-flying technology stocks is more than a bear market: It’s the end of an era for a handful of giant companies such as Facebook parent Meta Platforms Inc. and Amazon.com Inc.Most Read from BloombergPutin Says Russia May Add Nuclear First Strike to StrategyHarry and Meghan Throw the Gauntlet to William and KateThe Harry and Meghan Show Is a Royal KnockoutTwitter Sued for Refusing to Pay for Two Private Jet ChartersCeline Dion Brings Attent Read More... 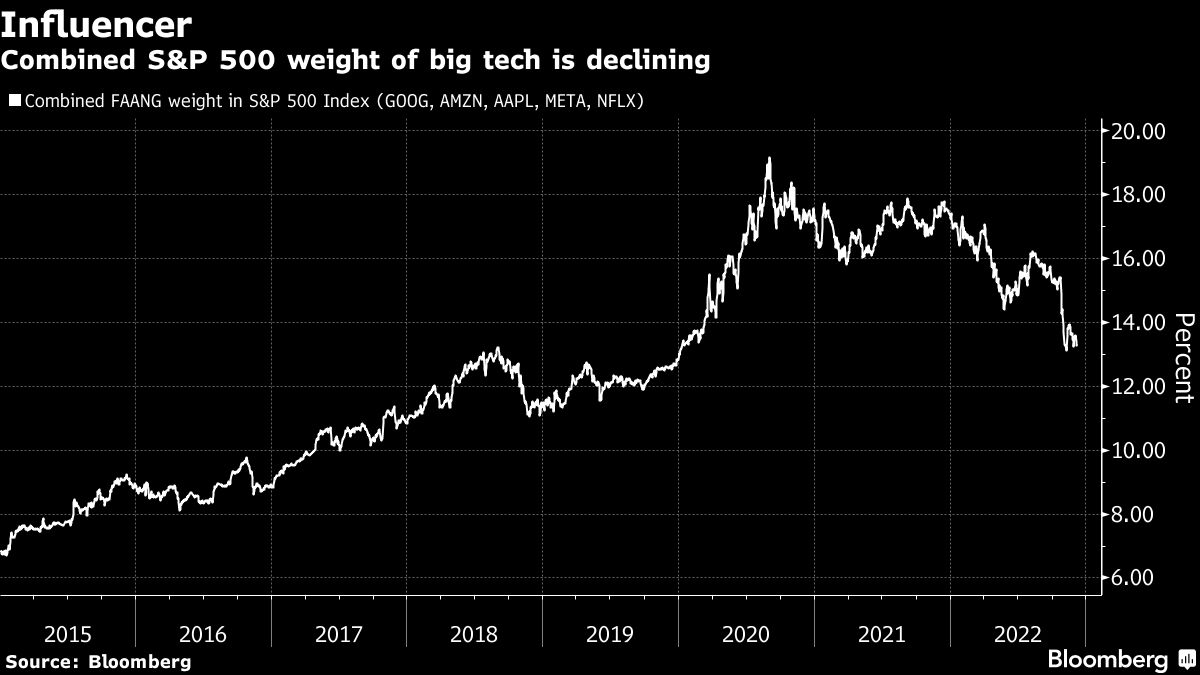 (Bloomberg) — For some investors, this year’s rout in high-flying technology stocks is more than a bear market: It’s the end of an era for a handful of giant companies such as Facebook parent Meta Platforms Inc. and Amazon.com Inc.

Those companies — known along with Apple Inc., Netflix Inc. and Google parent Alphabet Inc. as the FAANGs — led the move to a digital world and helped power a 13-year bull run.

But history shows that market leaders of one era almost never dominate the next one. There are early signs that a shift is already under way: Growth has slowed or evaporated for Netflix and Meta, while the sheer size of Amazon, Apple and Alphabet means they’re unlikely to provide the huge returns in the future that they did in the past.

“We think it is unlikely the FAANG will lead the next tech bull cycle,” Richard Clode, a portfolio manager at Janus Henderson Investors, said by phone, adding that he has reduced his holdings of those stocks “very materially.” “We are at our lowest exposure to FAANG that we’ve been since the acronym was created.”

If it is indeed the end of the cycle for these companies, what an ending it’s been.

The outbreak of the coronavirus pandemic in early 2020 rocked the whole stock market, but after a blink-and-you-missed-it plunge, indexes came roaring back. Large-capitalization technology stocks including the FAANGs led the way as locked-down consumers ordered goods from Amazon, subscribed to Netflix to watch “Tiger King,” and spent hours scrolling through Facebook and searching on Google using iPhones.

But investors are reassessing their longer-term potential now that societies have reopened and higher interest rates around the world have damped risk appetites.

One of the biggest draws for investors has been the super-charged growth rates that technology companies offered. Now the growth looks more pedestrian.

“Superior” sales growth, the characteristic most associated with large-cap tech stocks, has vanished, at least for this year, Goldman Sachs strategists wrote in November. The bank’s strategists predict sales growth of 8% for megacap tech stocks in 2022, below the 13% growth expected for the broader S&P 500 Index.

While Goldman does expect tech companies to deliver faster sales growth than the benchmark next year and in 2024, the gap is much smaller than the average of the past decade, the firm said.

“It’s very hard to grow those mega-revenues at very, very high growth rates the way that they did historically,”said Michael Nell, senior investment analyst and portfolio manager at UBS Asset Management. “While the megacap stocks have held up well, going forward it’s hard to see that they are necessarily going to drive performance from here.”

Meta shares shed a quarter of their value in one day in October after the Facebook owner’s sales forecast for the fourth quarter came in at the low end of analysts’ expectations amid a slowdown in the advertising market. Amazon.com slumped 7% a day later after projecting the slowest holiday-quarter growth in the firm’s history.

The example of past stock-market stars is sobering. Cisco Systems Inc. and Intel Corp., leaders in the dot-com boom of the late 1990s, have never climbed back to the highs they reached in 2000, while it took the Nasdaq 100 Index 15 years to surpass its 2000 peak.

Apple, the world’s largest company with a $2.3 trillion market value, has held up the best in this year’s bear market, falling 20%. The stock has been bolstered by the company’s cash pile of about $170 billion, marketable securities and demand for its latest iPhones.

The other stocks in the FAANG group have fallen more, ranging from Alphabet’s 36% drop to the 66% plunge of Meta. Even with the declines, the group still accounts for more than 10% of the S&P 500 weighting, so subpar performance in coming years will be a big drag on the market.

And the pain in technology stocks looks set to continue next year. Analysts see profits for the industry contracting by 1.8% next year, compared with expected growth of 2.7% for the broader US market, according to data compiled by Bloomberg Intelligence.

Faced with a higher cost of borrowing and rising inflation, investors are becoming more exacting in terms of which companies they are willing to back. Big capital projects on unproven technologies, such as Meta’s bet on the metaverse, haven’t gone down well. A basket of money-losing tech stocks compiled by Goldman has plunged nearly 60% this year.

“The market’s telling them we want some near-term profitability and we can’t afford to fund all of your negative free cash flow. Get a bit more realistic: grow a little bit slower, but do it profitably,” said Neil Robson, head of global equities at Columbia Threadneedle Investments.

Robson is still overweight technology in his portfolios, though by a smaller amount than in the past. He still owns Amazon and Alphabet, though he’s also investing in companies that improve energy efficiency. UBS Asset Management’s Nell is finding opportunities in the software-as-a-service space and semiconductor stocks, while Janus Henderson’s Clode is looking toward energy, cybersecurity and artificial intelligence, and at areas that could prove resilient in a recession, such as software firms that could help with productivity.

“Two years ago we could have thrown a dart at a FAANG dart board and we would’ve pretty much come up a winner, right?” said Dan Morgan, a senior portfolio manager at Synovus Trust Co. “Do we just blindly throw money into an ETF which just buys nothing but FAANG? That’s probably not going to work anymore.”