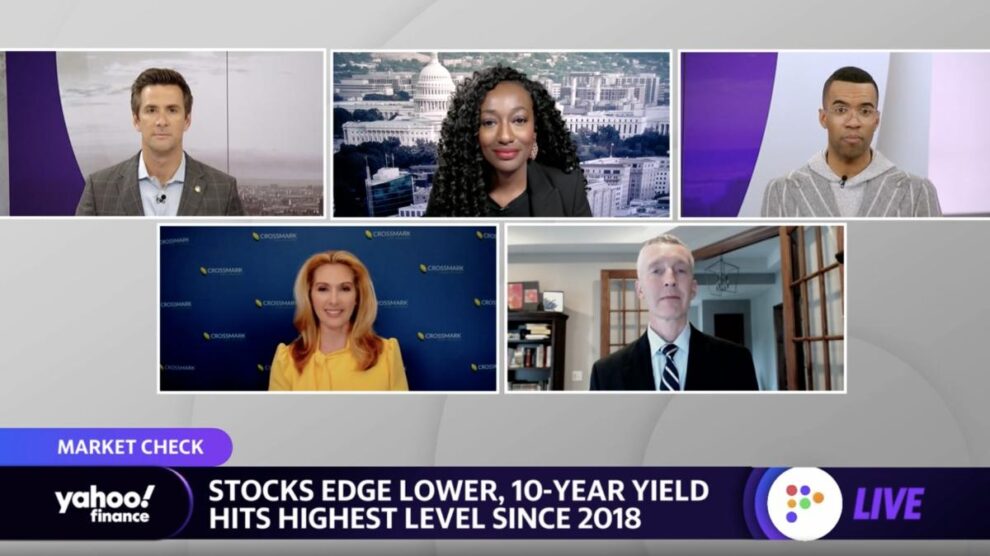 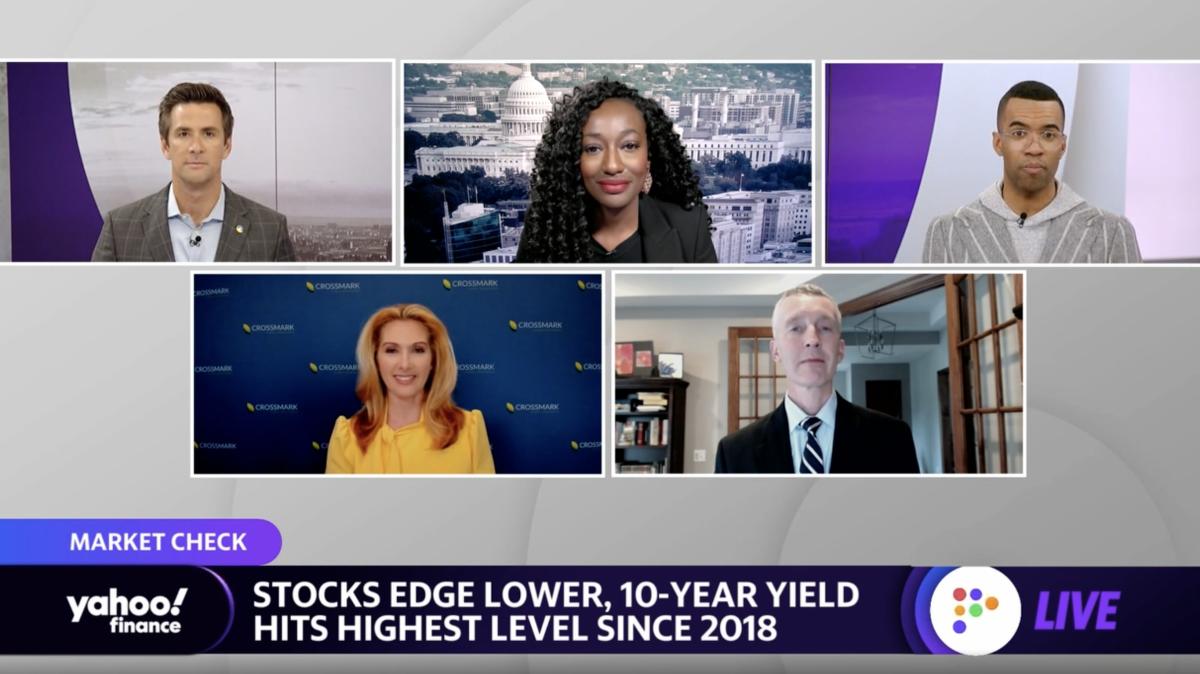 BRAD SMITH: And that was the closing bell on Wall Street. The markets, they closed lower pretty much across the board there as you’re seeing on the Dow, S&P 500, and the NASDAQ. The Dow was lower by about 1/10 of a percent on the day– closed down by about 38, 39-ish points we round that off to.

S&P 500, you’re seeing that close flat just barely to the downside by about 2/100ths of a percent, not even a full point down on the day. And the NASDAQ composite– yep, that too in the red. It’s lower by about 1/10 of a percent is where we end out today’s trading session, down by about 18 points. Once again, Brad Smith here with Rachelle Akuffo and Dave Briggs.

Let’s kick things off and I want to get first, Victoria, your analysis of what took place here today. Of course, we’re getting into another big week for earnings. But most notably, we’re going to hear about some of the activity that is certainly derivative from the Fed’s pathway forward as well.

VICTORIA FERNANDEZ: Yeah, I think you’re absolutely right. Obviously, earnings now that we’re kind of in the heat of the earnings season here, we just got through the financials. I think we came out of that pretty well positioned. There was a little bit of positive and negative out of everything, but ending today with Bank of America on a pretty solid note. It’s a name that we like and have actually added to our portfolio recently.

But I think their earnings is really going to set us up. And when you look, we really have a peek this week into a couple main themes. We have a peek into supply chains with CSX, with Union Pacific. We’re going to be able to hear how supply chains are doing. We get a peek into different parts of the consumer behavior.

You’ve got Procter & Gamble to look at staples. You’ve got Tractor Supply to look at the retail side. And airlines are going to report as well. I think we have United and American this week. So there’s a lot of different kind of balls up in the air that people are watching to see what’s going to come out of earnings and what that guidance is going to look like. And people are just kind of positioning themselves here as we head into this second quarter.

DAVE BRIGGS: And, Brian, typically one of the better performing months, in particular with the S&P. But do you expect more of this type of performance for the rest of the month?

BRIAN JACOBSEN: Yeah, we really do. I think that Victoria did an excellent job of laying out what you can expect for this week and some of the really important market narratives to pay attention to. The bad thing is we don’t think we’re going to get a lot of resolution to any of that. We actually might get a little bit less clarity as to the outlook as we go through earnings season, perhaps quite a bit of equivocation from executives as they talk about the outlook just because of the radical uncertainty that we face as far as with high food, fuel, and now increasing financing costs as well.

So we think that can all contribute to some market volatility here. Longer term, we’re still very optimistic about the outlook. We think that we could see 8% to 10% EPS growth in the S&P 500 over the next year. It’s just getting through this quarter and then getting through the messaging around the Fed rate hiking path I think will be very important in the near-term.

RACHELLE AKUFFO: And given that we’re going to be seeing this volatility for a while, Victoria, how is this informing the sorts of questions that you’re getting from clients about how they should be positioning themselves?

VICTORIA FERNANDEZ: Yeah, we always get the question, Rachelle, from clients on, is this a time for us to go to cash? Do we need to pull money out, sit on the sidelines? We really don’t like that approach. We feel like trying to time your entry and exit into the market is almost what we would call a fool’s errand.

It’s really hard to get that right, both going in and going out of the market. So we try to stay invested in the market, but you do have to be very particular at this point in time because of the volatility. We’re trimming some names. Jared showed Nvidia up today around 2.5%.

We trimmed a little bit of our Nvidia position today to take advantage of that. We’ve put money into other areas that we think will do well– Intel, which is more of a value tech name. We put some money there. We talked about the financials– Mastercard is an area we like. And we’re putting a little bit in some of the defensives like health care. I think you need to look there as well.

But we want our clients to really look and see what their goals are. A lot of clients are asking about income. How can they take advantage of higher rates? So I think they also have to look at alternative types of investments– covered call strategies, dividend strategies, even fixed income. I know people are going to say, what is she talking about? But if you need a steady cash flow coming out of your portfolio, knowing that bonds, you can hold them to maturity to eliminate some of that volatility in the market, I think there’s some opportunities there as well.

BRIAN JACOBSEN: Yeah, we do. And actually, we were anticipating that March– the numbers that we get for the month of March, which were just recently released here in April– there’s always that one-month lag between the month that it’s reported for and when you actually get it– is that that would actually be the peak mainly because of the incredibly high food and fuel costs.

Still, year-over-year, even though we’ve seen some of those food and fuel costs come down, they’re still up 100%, I think, over the last year. So it’s still a very large rise. But the month-on-month numbers and even the year-on-year numbers, those can begin to moderate now on a going forward basis. And that means that we think that the Fed can actually get a bit of an easier job here when it comes to messaging.

They might not want to tone things down quite yet. They’ll probably want to get a couple of months’ worth of inflation data coming down before they say, OK, you know what? Maybe we can take a little bit of pause on this hawkishness. We’ll still run down the balance sheet, but we don’t necessarily have to really take a very aggressive path higher with rates here. But we expect that type of moderation in their language will mostly come probably around June or so.

DAVE BRIGGS: And, Victoria, do you expect a soft landing? And how do you expect geopolitical events– obviously, the Russian attack of the Ukraine, but also the GDP numbers we saw in a China and the increasingly worsening lockdown situation there.

VICTORIA FERNANDEZ: Yeah, soft landing is going to be really tough. It’s really kind of like, you know, walking that tightrope. But I think it can be done as long as the Fed is patient about what they’re doing. We see other central banks, we see the ECB being a little bit patient about what they’re going to do. Obviously, the geopolitical events have increased a lot of the issues– we’re looking at sentiment could continue to be worse, inflation could move a little bit higher if we see the Russia-Ukraine war continue on.

And that also has given us some secondary effects in regards to the European recovery. We thought we would have seen that sooner rather than later. And the Russia-Ukraine war has pushed that out on the timeline a little bit as well. So I think the Fed needs to be careful.

We just talked about some of the inflation readings that they’re going to be getting between the May meeting and the following meeting. We based on base effects probably being a little bit better, we should see inflation numbers start to come down a little bit. Perhaps that gives the Fed a little more room to do a 50-basis point move in May but then pull it back a little bit going forward.

RACHELLE AKUFFO: And so, Brian, then, in terms of previous soft landings and the environment– the inflation environment the Fed was in previously, how do you think that compares with this current situation?

BRIAN JACOBSEN: Yeah, I think that’s what really makes this challenging. And the previous soft landings that they had, and, really, when you look at the historical record, I think Chair Powell only pointed out, like, three of them, which isn’t really a very large number– didn’t give me a lot of comfort. Those were in environments in which they were anticipating inflation.

So they’re trying to get in front of it. Here, they’re very much behind it. So they’re kind of coming at inflation from a very different direction. I actually think of this more as likely to turn out like in kind of 1999, where they were trying to hike in anticipation, things they thought were kind of overheating. And then they ended up just doing a little bit too much.

And it’s mainly because if they’re going to be very data-dependent, the data comes out with a lag. And the market isn’t necessarily– the market is forward-looking. The market doesn’t look at the trailing numbers. And so the market might give them a vote of no confidence if they decide that they’re going to do 50 basis points in May and then another 50 in June. So I hope that they do tone down the rhetoric a little bit here, because, otherwise, I think that it’s going to be more of a hard landing as opposed to a soft landing.