This is the second time Krispy Kreme will be a publicly traded company, after it was taken private by JAB Holdings in a $1.35 billion deal. Read More... 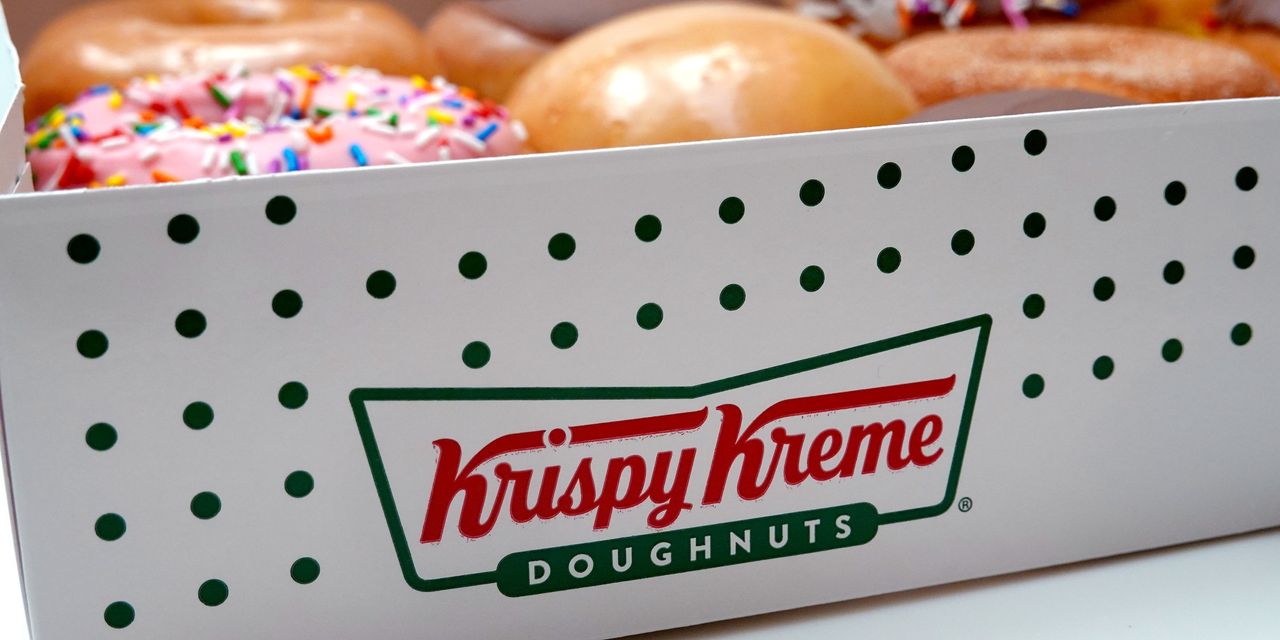 Hot Light Theater Shops and glazed waterfalls are just two mouth-watering features that Krispy Kreme Inc. discusses in its IPO prospectus, which was filed this month after the doughnut seller first filed confidentially in early March.

Krispy Kreme priced its IPO at $17 a share late Wednesday, well below the expected range of $21 to $24. It plans to raise $500 million through an offer of 29.4 million shares.

Krispy Kreme DNUT was public from 2000 to 2016, so the IPO will mark the return of the company to the public markets.

JAB Holdings Co., a German conglomerate based in Luxembourg with investments in companies like Panera Bread, Keurig Dr Pepper Inc. KDP, +0.53% and the fashion brand Bally, took Krispy Kreme private in a $1.35 billion deal in May 2016.

JAB plans to purchase between$50 million and $100 million in shares.

There are 19 underwriters on the IPO with J.P. Morgan, Morgan Stanley, BofA Securities and Citigroup the lead book-running managers. Krispy Kreme expects to trade on the Nasdaq under the ticker “DNUT.”

The company intends to use the proceeds from the offering to pay outstanding debt and for general business purposes.

Read: Amazon will open the doors to a grab-and-go, checkout-less grocery store on Thursday

Once it’s a public company, Krispy Kreme intends to offer a dividend, although it will need to become profitable to support a program. JAB Holdings will retain majority voting power once the deal closes, meaning individual investors will have little say in the running of the company.

“JAB will still be able to significantly influence the composition of our board of directors and the approval of actions requiring stockholder approval,” the prospectus says.

Goudet also intends to buy $5 million in shares in the offering.

“Accordingly, for such period of time, JAB will have significant influence with respect to our management, business plans, and policies, including the appointment and removal of our officers,” the prospectus said.

Krispy Kreme’s Chief Executive Michael Tattersfield has been in the role since January 2017. He was previously chief executive of Caribou Coffee, another JAB Holding brand, from August 2008 to July 2017.

Josh Charlesworth has been chief financial officer since April 2017 and has served as chief operating officer since May 2019. Prior to Krispy Kreme, he worked with Mars Inc., which manufactures candy, pet food and more.

The company describes itself as an “affordable indulgence,” with 1.3 billion doughnuts sold across 30 countries in fiscal 2020.

See: Jack in the Box jumps into the virtual restaurant business with Uber Eats and Jason Derulo

“Despite our high brand awareness, we have a limited presence in certain key U.S. markets, such as New York and Chicago and have yet to build a significant presence in key U.S. cities, including Boston and Minneapolis,” the prospectus says.

China, Brazil and parts of Western Europe are also viewed as attractive geographic locations that the company intends to enter. Geographic expansion is described as key to the company’s growth in the prospectus.

But net losses for fiscal 2020 were $60.9 million, or almost double the loss of $34.0 million recorded in the previous year.

An 83-year-old company based in Charlotte, NC., Krispy Kreme is sold at its own shops, which are also franchised, online, and through grocery stores and other outlets. The Hot Light Theater Shops and other hubs are known for the “Hot Now ” light, which lets customers know fresh doughnuts are ready, and “glaze waterfalls.”

The company is also parent of “Insomnia cookies,” a product founded in a dorm room in 2003, a brand that includes ice cream, brownies and other items in addition to cookies and delivers them “crazy late,” according to its website. Insomnia rang up more than half of its 2020 sales (54%) via e-commerce.

Building this brand is one of Krispy Kreme’s growth strategies.

Krispy Kreme now also has a Sweet Treat Line of packaged goods sold at grocers and other mass retailers.

Even with the focus on in-store entertainment, Krispy Kreme has a large takeaway business, with 87% of U.S. locations featuring a drive-thru and 64% of U.S. sales in 2020 going to off-premise customers.

Here are five more things to know about Krispy Kreme before it starts trading:

The company says its competitors are involved in the sale of a variety of treats, including doughnuts, ice cream, cookies and cupcakes. Moreover, these items can be found everywhere, from coffee shops to grocery stores to restaurants.

“Indulgence foods have proven to be recession-resistant historically, as exhibited by 4.0% category growth through the global financial crisis (CAGR 2007-2009) and 4.3% during the current COVID-19 pandemic (year-over-year 2019-2020),” the prospectus said.

“With favorable secular trends around indulgence and our positioning as a shared occasion treat, we aim to continue to strengthen our position as a leader in the category and capture outsized share of this attractive market opportunity.”

Watch: Which sectors stand to win or lose as inflation creeps up

Krispy Kreme has $1.2 billion in debt, its IPO documents show, the bulk of which is in the form of a term loan. While it plan to use proceeds of the IPO to pay down some of that debt, it will remain a burden as long as the company is posting losses.

Sharing accounts for a large part of sales

The company says 75% of doughnuts are sold in half-dozen or full-dozen sharing quantities. Nearly two-thirds of fiscal 2020 sales (64%) were of the Original Glazed doughnut.

In addition to the Original Glazed doughnut, Krispy Kreme uses holidays, such as heart-shaped doughnuts on Valentine’s Day, events, like the 50th anniversary of the Apollo moon landing, and personal moments in customers’ lives as part of the company’s marketing effort.

In March, the brand had a “COVID-19 vaccine offer” that gave a free doughnut to anyone who got vaccinated and generated tons of media buzz.

Krispy Kreme has few customers it can call regulars

The company acknowledges that most of its customers are not exactly regulars.

“Our strategy of linking product launches with relevant events has allowed us to effectively increase consumption occasions while meaningfully engaging with our communities and consumers.”

The company also sees Sweet Treat Line as a way into the snacking category and into lunchboxes.

Krispy Kreme has certain exposures in its supply chain

Krispy Kreme makes its own doughnut-making equipment at a facility in Winston-Salem, N.C. and has just one supplier for its glaze flavoring and glaze base.

Cookie dough for the Insomnia brand is also supplied by a single source.

“Unless and until we can secure alternative suppliers for such components, our dependence on such supplier will subject us to the possible risks of shortages, interruptions and price fluctuations,” says the prospectus.

Nvidia heads back toward $100 billion, brings AMD along for the ride as gaming chips bounce back

Snap Set to Open at Highest Since August