When Netflix (NASDAQ: NFLX) reported earnings this week, its subscriber growth figures were terrible. Netflix shares plunged as much as 8.3% lower the next day and are still trading roughly 15% below January's all-time highs. Critics point to the chart above, claiming that Netflix has run out of rocket fuel. Read More... 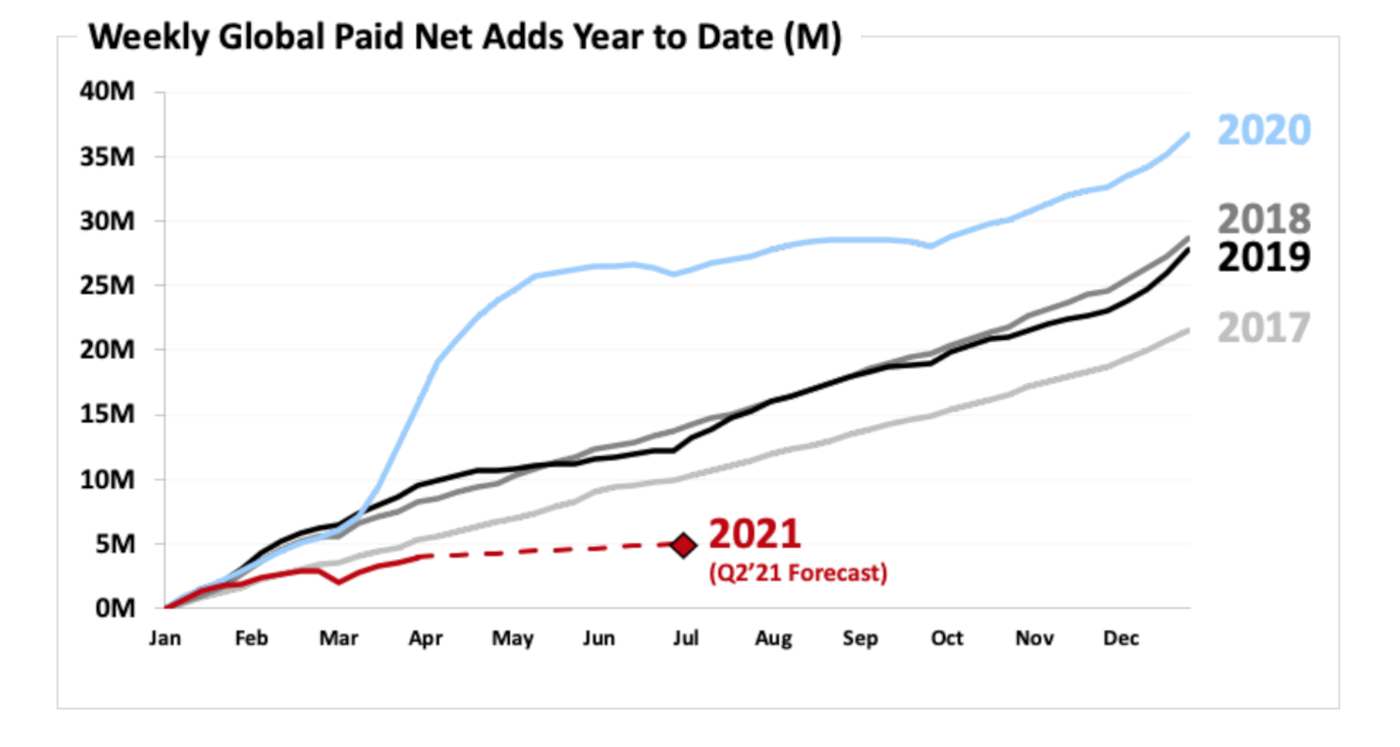 (Bloomberg) — Industrial metals from copper to aluminum to iron ore have rallied to the highest level in years.The reasons for their gains are plentiful: Copper — critical for everything from electrical wiring to motors and thus a bellwether for the global economy — broke out of its recent range to trade near the highest since the last supercycle as industrial operations ramp up worldwide. Iron ore, aluminum and steel are meanwhile gaining on speculation that production cuts will shrink supplies just as demand is taking off. And a weaker dollar is making commodities traded in the currency cheaper to buy.But underpinning the rally is one simple fact: Some of the world’s large economies such as the U.S. and China are recovering from the pandemic, stoking demand for more cars, electronics and infrastructure. U.S. President Joe Biden’s $2.25 trillion infrastructure package and bets that more aggressive climate pledges will accelerate the proliferation of solar panels, wind turbines and electric cars are further driving gains and raising fears about metal shortages. This week’s U.S. climate summit only intensified those concerns.“Biden’s new climate promises and at least lip service by China to greener domestic policies are keeping the demand picture rosy,” said Tai Wong, head of metals derivatives trading at BMO Capital Markets. Shrinking inventories this week also continued to buttress supply concerns, he said.Virtually every metal vital to industrial operations gained this week as a result. Copper was up 1.6% to cap off the week at $9,551.50 a metric ton in London, the highest closing price since August 2011. Iron ore rose in Singapore. Chinese steel futures reached new highs as investors weighed the nation’s commitment to lowering output against strong demand. Shanghai rebar reached the highest since futures began trading in 2009.Jiangxi Copper Co., China’s top smelter, expects prices to reach $10,000 as plans to curb carbon emissions boost demand for the metal critical to the green-energy transition. Meanwhile, orders for copper stored in warehouses monitored by the London Metal Exchange have picked up, with 83,150 tons of metal now earmarked for withdrawal, the highest level since July.“The outlook for copper has never been better,” said Richard Adkerson, chief executive officer of Freeport-McMoRan Inc., the top publicly traded producer. Supporting that view are scarce stockpiles, strong demand and a dearth of big new projects waiting in the wings.While banks including Goldman Sachs Group Inc. expect further gains in metals including copper, there are simmering concerns that could still subvert the rally. Copper had cooled through March and early April on worries about a global resurgence in the coronavirus, and new variants of the virus still pose a threat to plans to reopen economies. The possibility of reduced stimulus in China could also slow the world’s second-biggest economy and torpedo metal demand. For now, signs point to economies on the mend. Applications for U.S. state unemployment insurance unexpectedly plunged to a fresh pandemic low. Key indicators for consumer and industrial activity are rising in China.Palladium, a metal used in catalytic converters to curb emissions in gasoline-powered vehicles, reached an all-time high this week for similar reasons. Between rising car demand, tightening pollution controls and production disruptions, the world is set to be short on supply for a 10th straight year, according to UBS Group AG.Meanwhile, Chinese authorities and the broader steel industry have pledged to lower output after reaching record levels last year. And China’s steel hub Tangshan is facing a slew of production restrictions amid the push to control emissions. Crude steel production neared a record in March while rebar inventories declined for a sixth consecutive week, signaling strength in demand amid the construction season.Aluminum prices are also rallying, with London futures up about 20% this year, supported by expectations for further supply curbs in China, the biggest producer.Stoking supply concerns are soaring Covid cases in Latin American nations including Brazil and Chile, which threaten to curb output at mines. The price rally has caught the attention of unions and politicians in host nations. The Chilean copper industry is facing a slew of wage talks and the leading presidential candidate in Peru wants to renegotiate contracts with mines to channel more of their profit to communities.“Consumption’s increasing across Europe, the U.S. and Asia, and then we have supply-side stress in Latin America, coupled with some very strong technical signals,” Michael Cuoco, head of hedge-fund sales for metals and bulk materials at StoneX Group, said by telephone. “There really is a perfect storm brewing.”For more articles like this, please visit us at bloomberg.comSubscribe now to stay ahead with the most trusted business news source.©2021 Bloomberg L.P.

FA Center: A capital gains tax hike might sink stocks. Here’s how financial advisers and their clients can stay a step ahead.
Corsair Gaming Makes a Smart Move to Woo PC Gamers
Comment

From bus companies to distillers, these industries are asking Washington for coronavirus aid

The antitrust suspects: Facebook and Apple appear to be most at risk