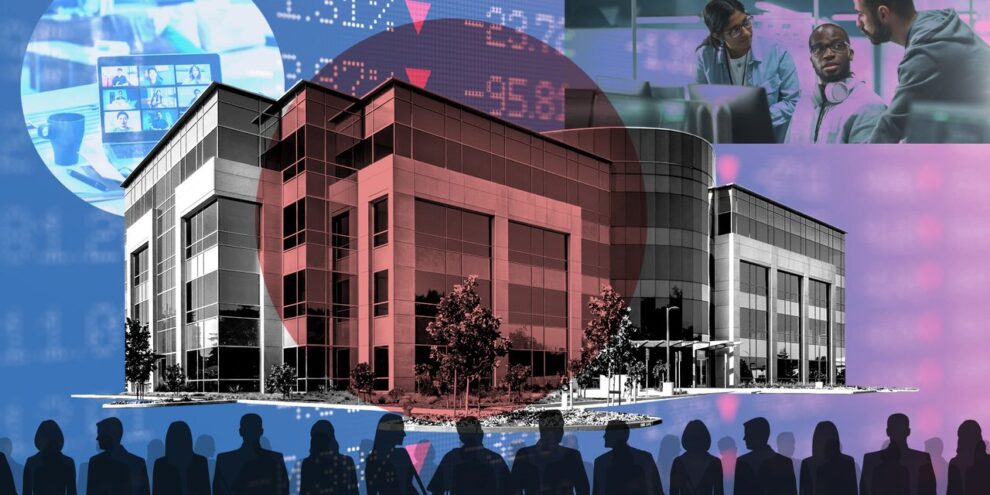 After Big Tech grew in unprecedented and unchecked fashion for a decade, building ostentatious palaces to house growing workforces while plying them luxuriant freebies to keep them from defecting to rivals, is the wild ride over? Read More... 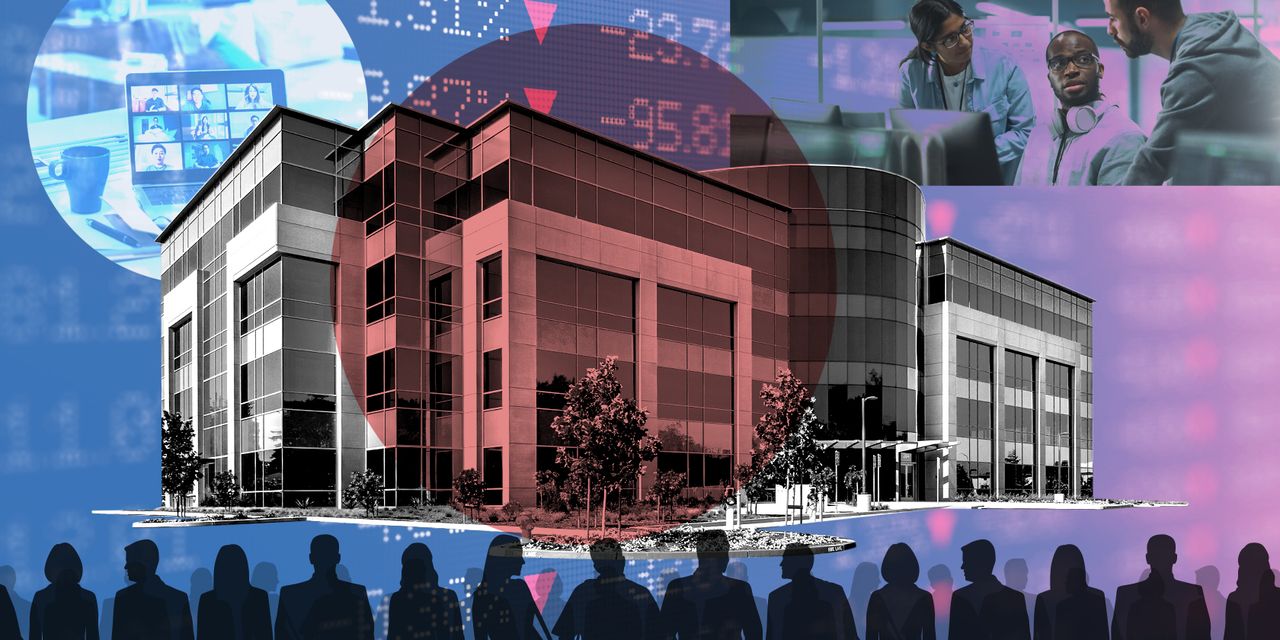 After Big Tech grew in unprecedented and unchecked fashion for a decade, building ostentatious palaces to house growing workforces while plying them luxuriant freebies to keep them from defecting to rivals, is the wild ride over?

Tech’s largest companies, as well as their smaller competitors, are looking to cut back as they face a litany of headaches: Billions of dollars in unused commercial real estate; supply-chain and cost issues; evaporating funding; a 21% drop in global M&A activity in the first half of the year to $2.2 trillion, according to new data from Refinitiv; an all-but-shut window on IPOs; wage inflation; talent retention.

The chief executives of Meta Platforms Inc. META, -7.59% and Alphabet Inc.’s GOOGL, -5.63% GOOG, -5.81% Google have warned employees of tough times ahead — with Mark Zuckerberg telling employees on the last day of the second quarter that the company faced one of the “worst downturns that we’ve seen in recent history” —and Microsoft Corp. MSFT, -1.69% is slowing hiring in some groups and eliminating a few jobs. Even the world’s most valuable company, Apple Inc., AAPL, -0.81% reportedly plans to scale back hiring and spending, after profligate spender Amazon.com Inc. AMZN, -1.77% signaled cutbacks earlier this year. Other high-flying tech players in recent years, such as Netflix Inc. NFLX, -1.54%, Snap Inc. SNAP, -39.08% and Lyft Inc. LYFT, -4.45% are making similar or more drastic moves, and many startups are in much worse shape.

See also: Tech companies are shifting to layoffs after a huge ramp up in hiring

All of these are signs of vexing changes coming to the industry after a boom during the first two years of the pandemic, when tech companies indulged in a frenzy of hiring and spending and allowed some employees cushy work-from-home schedules. But inflation, supply-chain woes, the war in Ukraine and the prospects of recession could impede what venture-capital legend Bill Gurley called a “Disney-esque set of experiences/expectations in high tech companies.”

The perfect storm of economic calamity has led one legendary executive to predict nothing short of a “bloodbath in the tech market” for the next one to three years that could dramatically change the culture and business structure of companies in Silicon Valley and beyond for the foreseeable future.

“It’s going to be a lot of pain, and a lot of people will get hurt,” C3.ai Inc. AI, -13.79% CEO Tom Siebel told MarketWatch. “We had this SPAC, NFT, crypto craziness. The days of everyone making lots of money, working at home in pajamas, being paid in bitcoin, that’s over.

“Before this is over, there will be lots of empty commercial real-estate buildings like we saw in 2000-’01 in Silicon Valley,” Siebel added. “Not as many, but a lot.”

Employees are especially feeling the pinch. A recent LinkedIn poll revealed 60% of respondents were either worried or very worried about their careers because of economic uncertainty.

Read: The Great Renegotiation — Millions of employees quit old jobs for better ones

“Camelot is over for them. It’s over,” Hilary Kramer, a nationally-renowned investment analyst and portfolio manager, told MarketWatch. “This growth was not sustainable, and COVID undoubtedly helped prolong strong results for Amazon, Apple, Netflix, Microsoft and all the videogame makers.”

Tech giants flush with billions in cash aren’t crying poor, but with a possible recession on the horizon, even those with the deepest pockets have a strong motivation to watch their bills. Imagine, then, the quandary for smaller companies dependent on funding with little chance of going public anytime soon, or those stuck in the middle.

Qualtrics International Inc. XM, -5.92% CEO Zig Serafin picked up on a depressing vibe after speaking with about 100 CEOs in Europe over the past 90 days. Their concerns over interest rates, inflation, supply-chain constraints, talent retention and geographical uncertainty has prompted a “healthy level of caution” going forward for the experience-management platform company. Though demand for Qualtrics’ software remains strong, he said some deal cycles are going through more approval among cost-conscious customers.

“Remember this whole Roaring ‘20s thing? The feeling was, ‘Hey, we have to go big,’ and some companies overspent and over-hired,” Vijay Chattha, CEO of VSC, said.

One likely consequence, Calkins said, is a forced return to dazzling business parks like Apple Park and the Googleplex, where “we are wasting a lot of money on commercial real estate.”

For more: How to handle the dreaded ‘return-to-work’ Zoom call with your boss

“It was a remarkable, anomalous era for work: To be paid so much and to work in ideal conditions,” Calkins said. “But to paraphrase Bill Gurley, the days of fantasyland are over.”

Google and Meta have brought employees back to the office at least twice a week. Meta’s offices were opened at full capacity on March 28, though anyone who can do their job remotely can apply for full-time remote work. The company offers a flexible hybrid schedule where Individual teams determine how often to gather in the office.

Apple was ready to make the move this summer but postponed in May after more than 1,000 current and former employees signed an open letter calling the plan inefficient, inflexible and a waste of time. Microsoft does not mandate employees return to the office, but considers it standard to drop in 50% of the time. Employees can request more flexibility to their schedules.

In January, about half of leaders said their company required or planned to require employees to return to in-person work full-time in the next year, according to research from Microsoft, which surveyed 31,102 workers around the world between January and February. Yet just 4% of employers said they require all employees to return to the workplace full-time, based on a survey of employers from the Conference Board.

Many companies are making the hybrid experience a “permanent reality,” with more productivity tools such as digital white boards, smart galleries, and workspace reservation areas, Zoom Chief Operating Officer Aparna Bawa told MarketWatch. “There are more tools at your disposal,” she said.

Those that do not walk that path, though, could take the departures of workers who do not want to return with a sigh of relief, as it means they can avoid another layoff and the severance that would come with it. The dynamic feels like a complete turnaround from a year ago, when many tech workers were considering walking away, especially if companies required them to return to the office.

Feeding the general paranoia and caution are notes from financial analysts, such as one predicting an “appocolypse,” or the bursting of the mobile-app bubble.

“We define this tech bear market as an era when expenses require greater justification with regard to [return on invested capital] and [customer lifetime value to customer acquisition cost], money is no longer free flowing, and nearer-term fundamentals matter more than the long-term dream,” Bernstein analyst Mark Shmulik said in an ominous July 13 note.

“The problem with this approach is that the companies get stuck in a lower growth environment in order to keep margins in check, leading investors to question the growth story — a vicious flywheel,” Shmulik cautioned.

Don’t miss: The cloud boom is coming back to earth, and that could be scary for tech stocks

But Rob LoCascio, the longtime CEO of LivePerson who went through the dot-bomb bust in the early 2000s, sees the current slowdown as a pale imitation of what happened then, and as more of a correctional era.

“Back in the early 2000s, we had to restructure the company in 2001 after laying off most of our staff, 140 of 180, because we were losing customers by the hour,” LoCascio told MarketWatch. “Half of our customers were dot-coms. The situation isn’t as dire this time around. We are trimming rather than slashing. There is an overreaction this time by the stock market.”