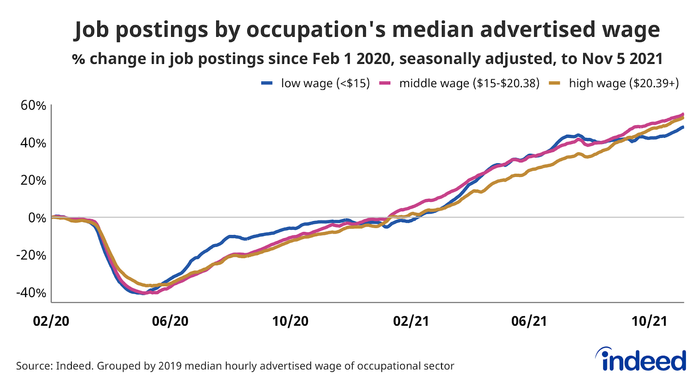 Jobs abound in human resources and in stocking and loading warehouses, according to the latest figures from Indeed.com Read More...

If you were looking for a job before the pandemic, chances are you settled for lower pay than what today’s job seekers are being offered.

As a result of the tight labor market in the U.S. — where there are some 10.4 million job openings and 7.4 million unemployed people — a greater share of employers are offering more than $15 an hour, according to the latest data from the job listing site Indeed.com.

Since the depths of the pandemic, there’s been a steady climb in the number of job postings across all wages levels on Indeed. But in recent weeks, job postings that pay below $15 an hour have slowed compared to ones that pay more.

“At the beginning of the pandemic, low advertised wage job postings, such as for loading & stocking and personal care & home health, recovered quickest and were often for critical roles as society shuttered at large,” AnnElizabeth Konkel, an economist at the Indeed Hiring Lab, said in a post.

Which sectors have the most openings currently? Many are in loading and stocking and human resources, Konkel noted. Meanwhile, “pandemic-sensitive occupations like beauty & wellness and hospitality & tourism remain well below job postings nationally,” she wrote.

The wage trend that Indeed highlighted is also showing up in government data.

Last quarter, employers collectively raised wages and salaries by 1.5%. And since the third quarter last year, wages have risen by 4.2% , while CPI inflation is up more than 6% for the past 12 months.

The tightness of the labor market is proving to be especially challenging for small business owners like Steven Hartwell, who owns the Sugar Shack doughnut shop in Saginaw, Mich.

On top of increasing supply costs, he’s had to raise wages to attract more workers and compete with larger neighboring businesses at the expense of his own profit margins, he told MarketWatch.

: ‘As much as we want to move past the virus, we can’t right now’: What a cancelled trip says about our continuing struggle with COVID-19
Disney Stock Tumbles After Earnings, Disney+ Subscriber Miss
Comment