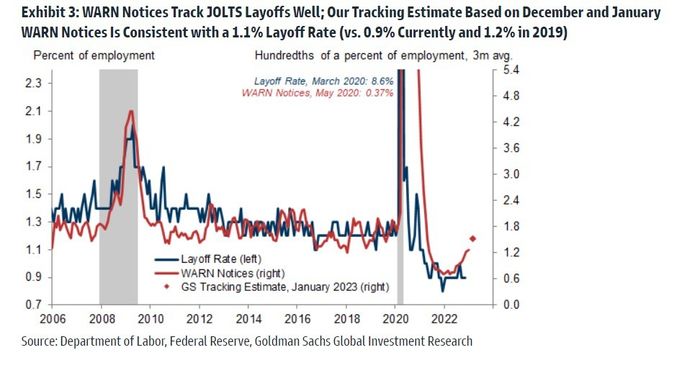 The Labor Department's job openings report may not be capturing a recent upturn in layoffs, according to new research from Goldman Sachs. Read More...

The Labor Department’s job openings report may not be capturing a recent upturn in layoffs, according to new research from Goldman Sachs.

Manuel Abecasis, a Goldman Sachs economist, looked at layoff notices filed under the Worker Adjustment and Retraining Notification Act, which require companies to notify state governments, and affected individuals, of plans to lay off 500 or more employees 60 days in advance. The WARN Act also applies to companies making at least 50 job cuts when an employment site is shut down, or the number of layoffs account for at least one-third of total workforce.

WARN Notices from seven big states — California, New York, Texas, Florida, Pennsylvania, Virginia and Ohio — tend to track the national picture very closely, which is useful because some of the smaller states are slow to report the data. And the big-state WARN Act data is more timely than the Labor Department’s Job Openings and Labor Turnover Survey, or JOLTS.

Abecasis says that based on December and January WARN notices from the seven big states, the layoff rate is around 1.1%, higher than the 0.9% layoff rate in the November JOLTS report. He adds the WARN notice data is consistent with recent survey results from the Conference Board.

Granted, a 1.1% layoff rate is still historically very low. But the upturn is significant for Federal Reserve policymakers, who say that the jobs market remains too tight. At the December post-meeting press conference, Chair Jerome Powell said the labor market continued to be “out of balance.”