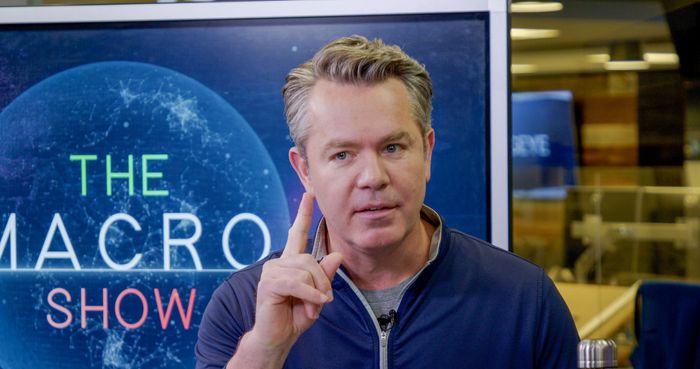 Where do you invest when you’re expecting the stock market to crash?

Keith McCullough, founder and CEO of Hedgeye Risk Management, has been bullish on gold, silver and utilities since the start of the year, when his investment-research firm’s economic models turned bearish on stocks and bonds.

That defensive move was the result of Hedgeye’s models getting an early jump on a shift in the U.S. economic climate. The models noted slowing U.S. corporate earnings on a year-over-year basis and surmised that inflation was near a peak.

The Federal Reserve waiting to raise interest rates because inflation was merely “transitory,” and then tightening monetary policy directly into a slowdown, is to McCullough a major policy mistake — and not surprising: “The Fed always screws up,” he says. “Their policy is too tight, too late.”

The Fed might be late to the game, but you don’t have to be. In this recent interview, which has been edited for length and clarity, McCullough — who prides himself on being a contrarian investor — tells investors how to position investment portfolios now for the bear market he expects by summer. He then points out what to watch for from the Fed, so you’ll know when the central bank is ready to stop punching investors and put the punch bowl out for them once again.

MarketWatch: The bearish outlook for stock and bond markets you’ve maintained since January has been playing out. Federal Reserve interest-rate hikes are inflicting great pain on investors.

McCullough: When economies slow into what we call “Quad 4,” governments intervene. Quad 4 is when the year-over-year rate of change of growth and inflation start slowing at the same time. Our Quad 4 call this year is for a drastic slowdown in earnings growth, which is driven by growth and inflation slowing at the same time. One hundred percent of the time when the Federal Reserve tightens in Quad 4, the U.S. stock market goes down by 20% or more. We’re expecting that to happen in the S&P 500 SPX, -1.85% by the time this is done.

MarketWatch: A 20% downturn in stocks is the definition of a bear market. Is this all the Fed’s fault?

McCullough: The Fed is tightening into a Quad 4 slowdown: Growth and inflation are slowing at the same time, and credit and equity markets don’t like that. So we’re short both high-yield and junk on the credit side. It’s the same as shorting U.S. growth on the equity side.

If you go back to June 2020 when we started making the call that inflation was going to accelerate, it wasn’t until 12 to 18 months later that the Fed realized it wasn’t transitory. They’re playing catch-up. The Fed always screws up. Their policy is too tight, too late.

MarketWatch: Inflation is slowing? Most people would differ.

McCullough: At the peak of the inflation cycle, all everyone sees is inflation. We see inflation on a headline basis peaking between now and the end of the second quarter, and then rolling over. Not rolling over hard, but by the fourth quarter falling towards 6%. It doesn’t matter how fast it’s slowing but that it’s not accelerating.

The longer the Fed stays vigilant, tightening into a slowdown, the faster stock prices fall. You’re going to really deflate asset prices. I can’t wait to see how the Fed is thinking about the equity market at 20 times earnings.

The market has a reflexive impact on the economy — consumer confidence, the wealth effect. Bitcoin BTCUSD, -2.91%, the Russell 2000 RUT, -1.92% and the Nasdaq COMP, -1.81% all peaked in November 2021. That’s about as wealthy as everyone’s going to feel. The economy then was coming out of Quad 2, both the economy and inflation were accelerating in a healthy way. Go from that to now, you have to deal with the reflexivity of falling asset prices and perception of wealth and consumer confidence.

If the Fed stays with six or seven rate hikes, they’re going to invert the yield curve and real U.S. economic growth is going to be threatening a recession. I’m more concerned about the expectation of a recession and the effect on consumer spending behavior than actually making a big recession call. Recessionary conditions are already embedded in the yield curve.

MarketWatch: With such a negative outlook, where should people put their money now?

We really like gold here. I was bearish on gold last year. Gold likes Quad 4. We like gold, gold miners, silver — SLV SLV, -1.86% the ETF on that, GLD GLD, -0.98% for gold. We still like energy though that’s probably the place I’m going to get off the bus first. I’m just watching inflation trying to find its peak, and oil and energy stocks are a proxy for that. Consumer staples, typically, but currently they have too much inflation so we’re not long those. We have very little equity exposure, given that we think the stock market is going to crash. Currently it’s gold, silver, gold miners, utilities — XLU XLU, -0.58% is the ETF.

We’re getting bullish on long-term Treasury bonds again. TLT TLT, -0.52% is the ETF for long-term Treasury bonds and SHY SHY, -0.04% for short-term. Where I think we get paid in the Treasury market is the Fed cutting back on these interest rate hikes. If I’m right on Quad 4 and recessionary probabilities are rising, the Fed can easily pull back two, three, four of these rate hikes.

“ ‘I personally don’t think the Fed can get away with much more than two rate hikes.’ ”

I personally don’t think the Fed can get away with much more than two rate hikes. If their second rate hike is at the May meeting, I think that could be it.

If I’m wrong and the Fed doesn’t undo their policy mistake, then I’m going to be even more right on shorting credit and U.S. stocks. They’re going to keep tightening as the markets are going down.

Treasurys won’t get bid up until the market starts to believe that the economy is slowing at an even faster rate and/or the Fed is going dovish. The market is usually good at sniffing that out, usually one to three months ahead of the turn the market will price this in.

MarketWatch: You’re optimistic that the Fed won’t be as aggressive as threatened. What gives you this idea?

McCullough: All of a sudden everybody thinks the Fed has a one-legged stool policy on inflation. It’s a three-legged stool. There’s the employment component, which I think will be deteriorating precipitously in the next three to six months, alongside corporate profits. Put two or three bad jobs numbers up, and then you have the third leg of the stool, which is, where’s the S&P 500? If it’s down 20% or more and the labor market is deteriorating, that makes the case. Corporate profits slowing precipitously and employment deteriorating give the Fed ample runway, especially if equity and credit markets are lower, to say “Done.”

MarketWatch: If and when the Fed does end the pain, do investment conditions then immediately shift from Quad 4?

McCullough: If the Fed pulls back and markets start to climb again and confidence comes back, we could easily get what we call Quad 1, which is modestly falling inflation and consumption growth. That is our current now-cast if the Fed goes dovish. Quad 1 is growth without rising bond yields. Basically my two favorite shorts, tech and consumer discretionary, would then become longs. Bonds would be fine but not as good.

The problem is that you’re going to have a stock market crash before, because for the Fed to go dovish the stock market has got to crash.

If you go back, 100% of the time I’ve made a Quad 4 call, with this Fed and the two Feds before, the stock market crashes, they come in and go dovish.

MarketWatch: What should investors be watching out for now so they’ll know when to turn bullish?

McCullough: Conditions are always different but behavior is always the same. The stock market and the credit market go down, and the Fed goes dovish. We’re in the very late innings of the jobs market being strong and interest rates being high. That’s why it’s so critical to pay attention to the Fed going dovish or not. If they remain hawkish through the slowdown, then the market decline is going to be more protracted. If they pull back, quite often that ends up being the bottom. If the Fed raises rates in May, sometime after that companies are going to be preannouncing Q2 earnings to the negative side. So the end of the second quarter, June, is the landing spot I’m looking for. But, if the Fed doesn’t provide the landing spot, then there’s no landing spot.

Plus: There’s too much bearishness in the stock market — here are four things that could go right for investors

One more: An ‘irrational exuberance’ indicator shows the stock market is off the charts compared with the top of the internet bubble