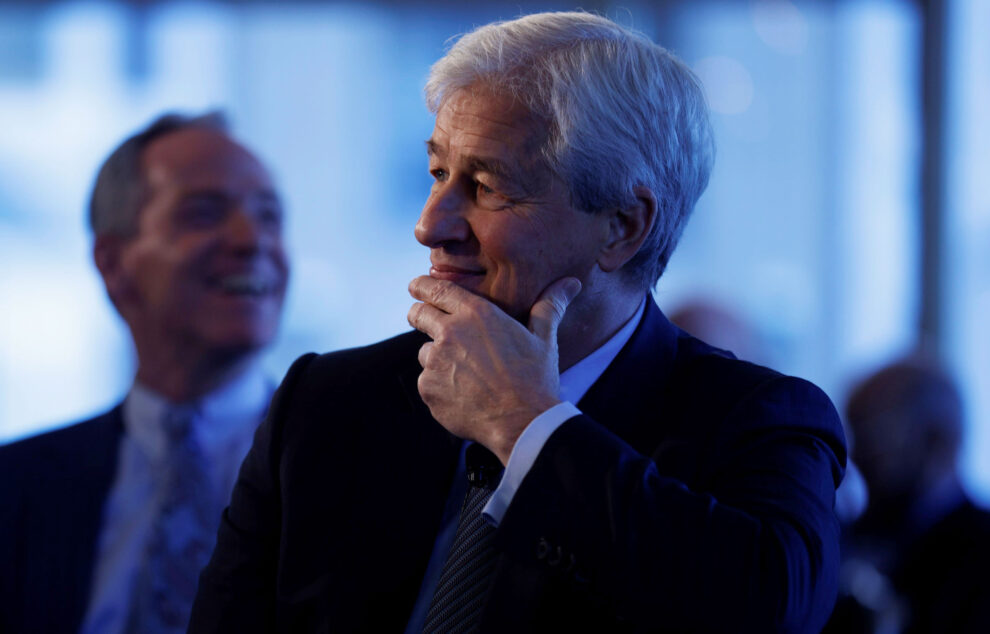 Analysts have pointed to a lending rebound in the fourth quarter, driven by demand from corporations and credit card borrowers. Read more...
List: The Top 50 Dividend Stocks

JPMorgan Chase posted profit that exceeded analysts’ expectations on a benefit from better-than-expected credit losses and as loan growth returned to parts of the firms’ business.

Here are the numbers:

Shares of the bank dipped 3.3% in premarket trading. JPMorgan said it took a $1.8 billion net benefit from releasing reserves for loan losses that never materialized; without that 47 cent per share boost, earnings would have been $2.86 per share.

After setting aside billions of dollars for loans losses earlier in the pandemic, JPMorgan benefited as it steadily released the funds as borrowers held up better than expected. But CEO Jamie Dimon has said he doesn’t consider the accounting benefit a core part of business results. Even when including the benefit, JPMorgan posted the smallest earnings beat in the past seven quarters.

“The economy continues to do quite well despite headwinds related to the Omicron variant, inflation and supply chain bottlenecks,” Dimon said in the release. “Credit continues to be healthy with exceptionally low net charge-offs, and we remain optimistic on U.S. economic growth.”

While companywide revenue rose a modest 1% in the quarter to $30.35 billion as a slowdown in markets revenue was offset by robust investment banking fees, non-interest expenses shot up 11% to $17.9 billion on higher compensation costs, the bank said. That was higher than the $17.63 billion estimate of analysts surveyed by FactSet.

Government stimulus programs during the pandemic left consumers and businesses flush, resulting in stagnant loan growth and prompting Dimon to say last year that loan growth was “challenged.” But analysts have pointed to a rebound in the fourth quarter, driven by demand from corporations and credit card borrowers.

Analysts may also ask the bank about the impact of its recent decision to rein in overdraft fees. JPMorgan said last month that it would give customers a grace period to avoid the punitive fees, a move that along with other changes will have a “not insignificant” hit to revenue.

JPMorgan chief operating officer Daniel Pinto said last month during a conference that fourth-quarter trading revenue was headed for a 10% drop, driven by a decline in fixed income activity from record levels. Offsetting that was an expected 35% jump in investment banking fees, he said.

The bank was forced to pay $200 million in fines last month to settle charges that its Wall Street division allowed workers to use messaging apps to circumvent record keeping laws.

Shares of JPMorgan have climbed 6.2% this year, lagging the 11.6% rise of the KBW Bank Index.