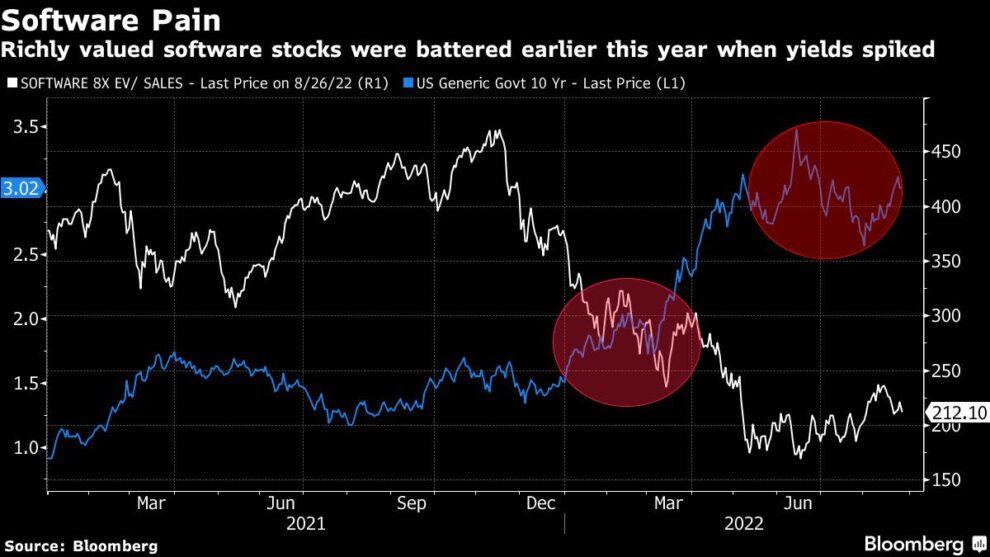 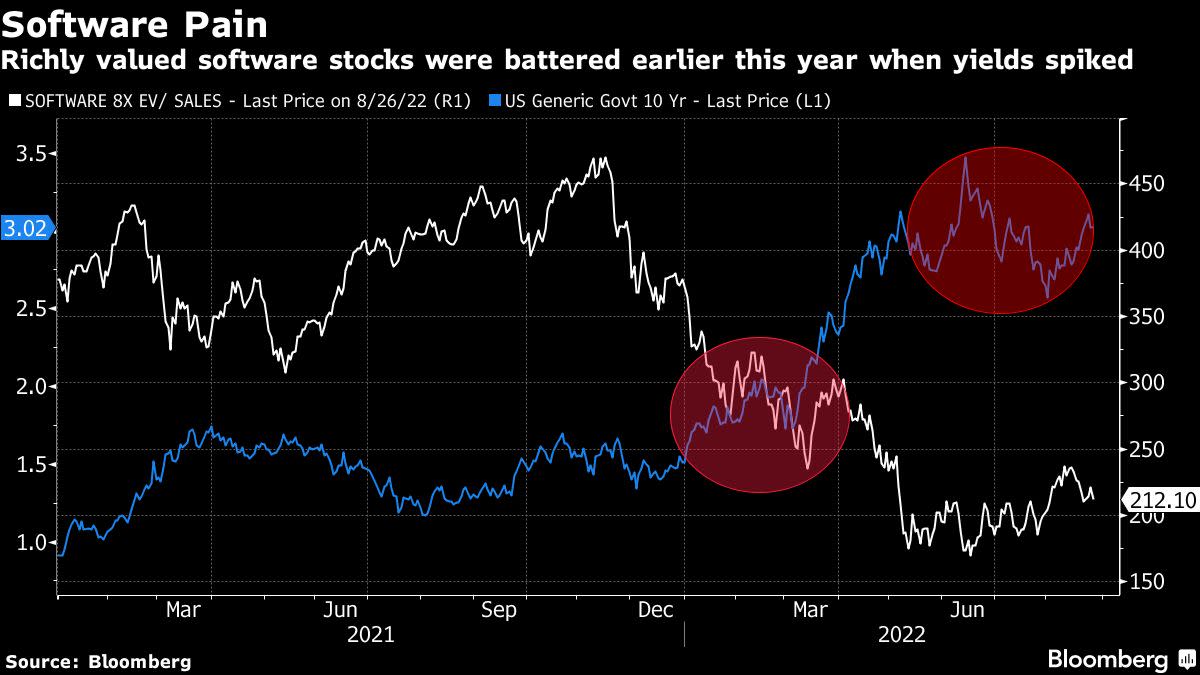 The Nasdaq 100 Index posted its biggest decline since the week ending June 10 after the Federal Reserve Chair touted Friday his iron-clad resolve to hike interest rates into restrictive economic territory to cool inflation at decade highs.

Portfolio managers, including long-term bulls on the sector, see the risk of fresh losses ahead for rate-sensitive technology stocks — as all signs suggest Powell will make good on his policy threat given prices for goods and services are still stubbornly high across the globe.

A fast rise in the 10-year note yield this month has already rocked so-called growth equities while igniting a cross-asset selloff after the recent $7 trillion stock rebound.

Wall Street worrywarts are now bracing for the Treasury benchmark to retest the near 3.5% peak reached in June or rise higher still to 4% — threatening fresh damage for blue-chip companies after the group rebounded more than 20% from the bear-market nadir.

“If yields spike back to 3.5%, that will jolt markets and be particularly painful for tech stocks,” said Nancy Tengler, chief investment officer of Laffer Tengler Investments. “If we get to 4%, the whole stock market will shift and recalibrate.”

All this threatens to catch hedge funds off-guard after the cohort in industry data tracked by Goldman Sachs Group Inc. ramped up tech bets last quarter to the highest since the start of the pandemic, on the conviction that a brewing economic slowdown would revive the megacap safety trade.

Another wave of volatility jolted Wall Street on Friday, after Powell’s jawboning at the Jackson Hole symposium as he warned of restrictive policy “for some time” given history “cautions strongly against prematurely loosening policy.” Futures contracts referencing the Fed’s September policy meeting priced in 64 basis points of tightening at one point Friday, compared to 59 basis points before the speech. But the stock market bore the brunt of Powell’s message that interest-rate increases may undercut economic growth as the tech-heavy Nasdaq 100 tumbled 4.1% even as the 10-year yield stayed broadly stable.

Generally speaking, technology companies are particularly susceptible to fears of rising interest rates because many of them are valued on projected profits delivered years in the future. The present value of those future profits are worth less as yields rise.

Soaring interest rates also make financing operations more expensive. That’s not an issue for companies like Apple Inc. and Microsoft Corp. that are flush with cash, but it increases risks for younger companies that are burning cash in pursuit of rapid growth.

The 10-year US Treasury yield hovered around 3% Friday, versus around 2.57% in early August.

“Investors are grasping for a dovish pivot, but they’re not going to get it until inflation falls — it’s certainly peaked, but it needs to meaningfully come down,” said Sean Sun, portfolio manager at Thornburg Investment Management. “If it takes the Fed raising rates even more aggressively to get there, then we could see the 10-year back to around 3.5%. This transition will hardly be painless for tech stocks.”

Money managers with a long-term focus are famously reluctant to offload tech exposures due to the cohort’s reliable profit generation, healthy balance sheets and ability to ride disinflationary trends.

For investors looking to maintain their exposure to technology firms, Sun recommends clients snap up shares of companies in IT services, while shying away from unprofitable, longer-term plays like early-stage software companies.

Tengler at Laffer Tengler sees tech pain in the near term, though she favors the cohort over the next three to five years. She’s sticking with cyber security stocks and companies that invest in cloud services like Amazon.com Inc., Microsoft and Google parent Alphabet Inc., while steering clear of struggling social-media firms like Facebook parent Meta Platforms Inc.

Meanwhile, prices for electronics in the Adobe Digital Price Index, an alternative measure of consumer price trends, fell 9.3% in August from a year ago, which may help signal lower inflation in the coming months, according to Jim Paulsen, chief investment strategist at The Leuthold Group.

That’s one reason why he’s a bull on the sector.

“The real issue for longer-term investors is whether this is the 1970s, where we have inflation permanently higher for longer? If it is, then you don’t want tech stocks,” Paulsen said in an interview. “Or is this just a cyclical spike in inflation? The odds strongly favor that we’ll eventually return to disinflation.”