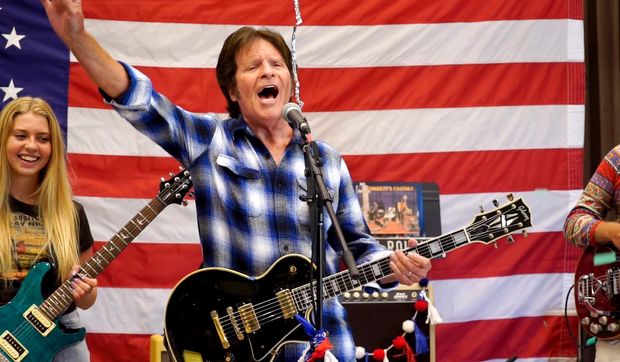 The rock legend tweets about his cease-and-desist order against President Trump, who regularly plays the classic Creedence Clearwater Revival anti-war anthem at his rallies. Read More...

“ ‘I wrote this song because, as a veteran, I was disgusted that some people were allowed to be excluded from serving our country because they had access to political and financial privilege. I also wrote about wealthy people not paying their fair share of taxes. Mr. Trump is a prime example of both of these issues.’  ”

“The fact that Mr. Trump also fans the flames of hatred, racism and fear while rewriting recent history, is even more reason to be troubled by his use of my song,” Fogerty continued in his tweet:

It’s pretty clear that, at this point, whoever picks Trump’s songs doesn’t really pay much attention to the lyrics. Or doesn’t care. “Fortunate Son,” according to Fogerty, is a song about the “unfairness of class,” specifically “about rich men making war and poor men having to fight them.”

Meanwhile, Trump, who managed to avoid serving in the military, has reportedly said soldiers who have died in war are “losers” and “suckers.” He also said that he prefers “people who weren’t captured,” referring to the late Sen. John McCain, who spent five years as a P.O.W. in Vietnam.

“I would say, that the president has chosen to use my song for his political rallies, when in fact it seems like he is probably the Fortunate Son,” Fogerty said on Facebook FB, -0.29% last month:

The tone-deaf choice of songs is becoming a bit of a theme for the Trump campaign, with several iconic artists, such as Neil Young, Guns N’ Roses, the Rolling Stones, to name just a few, also taking exceptions to Trump’s use of their music at his events.

Did Fogerty’s tweet have an impact? Not by the looks of this clip:

In One Chart: This is the hottest social issue that U.S. companies are discussing

Project Syndicate: America’s attempt to ‘get tough’ with China could accelerate our own relative decline