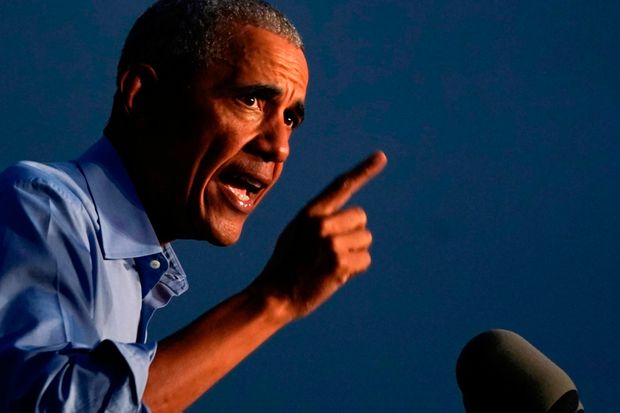 In his first TV interview since the election, Obama said the nation remains "deeply divided" and that it was "disappointing" that few Republican lawmakers have challenged President Donald Trump's unsubstantiated claims that he lost the election due to fraud. Read More...

“ “It’s very hard for our democracy to function if we are operating on just completely different sets of facts.” ”

In his first TV interview since the election, Obama said the nation remains “deeply divided” and that it was “disappointing” that few Republican lawmakers have challenged President Donald Trump’s unsubstantiated claims that the election was marred by fraud.

“But it’s been sort of par for the course during these four years,” Obama said. “They obviously didn’t think there was any fraud going on, ’cause they didn’t say anything for the first two days. But there’s damage to this, because what happens is that the peaceful transfer of power, the notion that any of us who attain an elected office — whether it’s dogcatcher or president — are servants of the people. It’s a temporary job.

When asked by King what it means that more than 70 million Americans voted for Trump, Obama said: “Well, what it says is that we are still deeply divided. The power of that alternative worldview that’s presented in the media that those voters consume, it carries a lot of weight.”

Obama became a vocal champion for Joe Biden in the weeks leading up to the election, with the former president sharply criticizing Trump on a number of occasions.

“I was just stating facts,” Obama said Sunday. “It was important for me, as somebody who had served in that office, to simply let people know, ‘This is not normal.’”

The Wall Street Journal: Simon Property, Taubman agree to price cut in reverse merger
5 Things You Might Not Know About Elon Musk
Comment