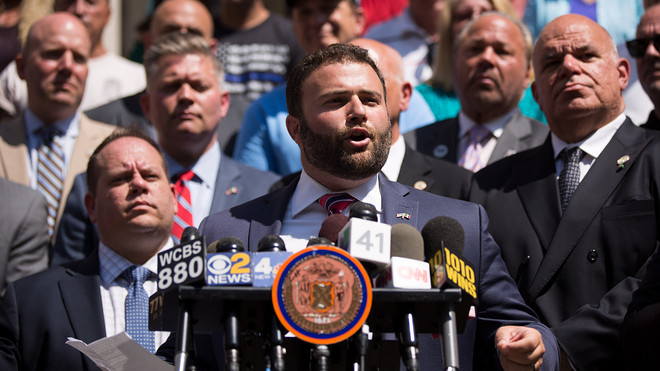 “ “Let me be clear about this: Government should have no role in determining how many family members you may lawfully have in your own home. Not even in the midst of a deadly pandemic. … My family, my house, and, so long as we obey fire and zoning codes, my rules.” ”

Borelli knows full well that his plans to have 11, possibly 12, people in his Staten Island home run counter to New York Gov. Andrew Cuomo’s newly-announced rules to keep private gatherings at 10 people and under in the face of rising coronavirus cases in the Empire State and elsewhere.

Recommendations and guidelines are fine by the Republican councilman, but a rule capping private gatherings goes too far, the councilman wrote. Borelli should “knock it off,” a spokesman for Cuomo, a Democrat, told the Staten Island Advance. “Nothing says Happy Thanksgiving like putting loved ones at risk to own the libs.”

While the two politicians spar, a new survey shows Borelli isn’t the only one planning an in-person Thanksgiving dinner that skews larger. Roughly two in five people told Ohio State University researchers they will likely attend or host a holiday gathering with over 10 people, according to a new survey.

Still, the 2,047-person survey shows the majority of people are taking precautions:

• 79% will celebrate only with people in their household

• Richer households, above $100,000, tended to exhibit a little more caution by saying they’d only celebrate with people they lived with, wearing masks and using social distancing at rates slightly over the average.

Don’t miss:Some Americans are more likely to socially distance and wear face masks than others — here’s why

Without safe celebrations, the country can plan for still-larger case spikes two weeks after Thanksgiving and two weeks after Christmas, one epidemiologist told MarketWatch.

The safest version of Thanksgiving this year is a virtual event with family members, public health experts say. But if people are intent on a gathering, the experts note there are important questions they can ask themselves first.

One bit of advice is to drive instead of using public transportation, they say.

There will be at least 10% fewer drivers on the road this Thanksgiving weekend, according to AAA estimates. It said the projected drop would the largest single-year dip since 2008, during the Great Recession.

‘They shouldn’t judge other people’s families’

Back in the Borelli household, the councilman told MarketWatch the people he’s inviting are the same people at his house for typical family gatherings, and they’re often outside.

Borelli’s district is going through a high seven-day positivity rate, like all of Staten Island, New York City statistics show. But other parts of the city are experiencing high rates now too, Borelli added.

The councilman says he regularly tested for the virus, and so are other members of his family. Come Thanksgiving, he’d ask anyone to stay home who showed symptoms and some attendees will voluntarily wear masks.

As for anyone who second-guesses Borelli or other people planning holiday events, Borelli said “they shouldn’t judge other people’s families before knowing the full story.”

Is it safe to have Thanksgiving with family? Here are the latest CDC guidelines on holiday gatherings
What’s the Cheapest Way to Save All Those Phone Photos?
Comment

$30 Billion of Proof That India's Tech Scene Is Back