Here’s how to get comfortable getting back out there (safely) Read More... 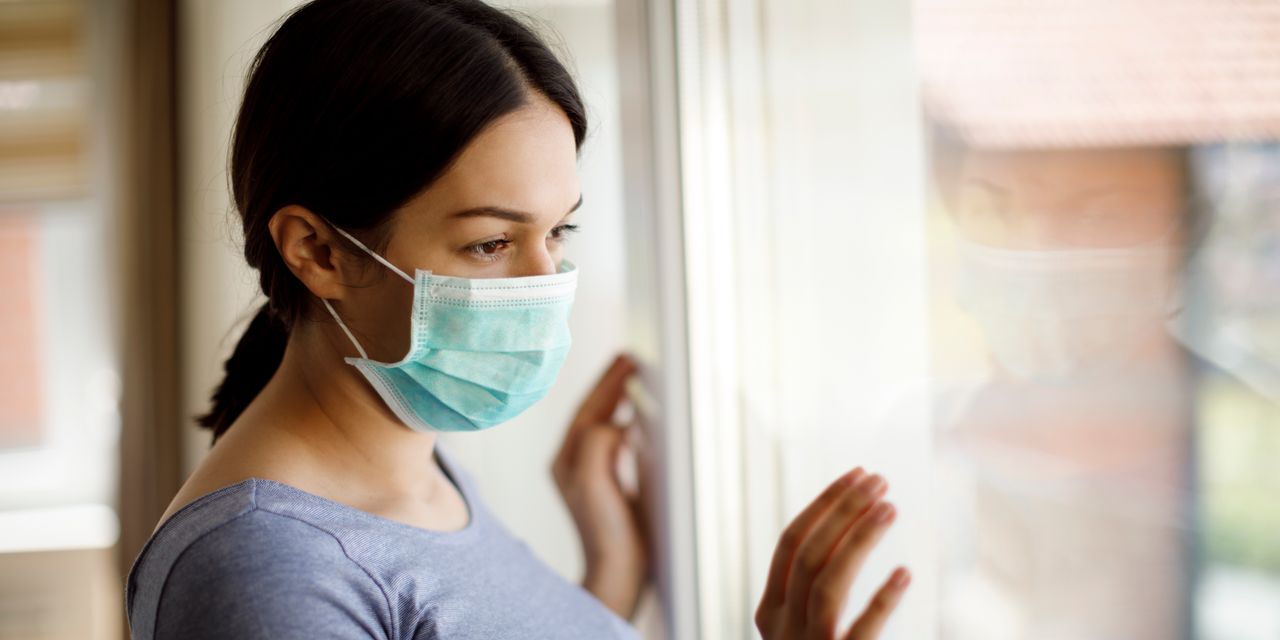 While the pre-pandemic “fear of missing out” drove people to crave the picture-perfect vacations, dishes and experiences that their friends were flaunting on Instagram, a year or so spent at home as many businesses and workplaces closed has forced some to do a complete 180. So now that states like New York and California have fully reopened, many folks admit to being gripped by FOGO — the “fear of going out.”

Psychiatrist Dr. Arthur Bregma, who is based in Florida, has also coined the non-medical term “cave syndrome” to describe this re-entry anxiety. “The longer people are in their cave, the harder it is to get out,” he told CNN, adding that he’s had patients ask him to write them doctor’s notes to get them out of going back to working in-person.

“ “After a while, we all kind of became a little too comfortable at home.”  ”

Dr. Sanam Hafeez, an NYC neuropsychologist and teaching faculty member at Columbia University, has seen the same thing with her patients. “After a while, we all kind of became a little too comfortable at home,” she said.

“The anxiety can be so overwhelming that the payoff for staying home is well worth missing all of the good things that come with being out and about,” she continued. “In my clinical experience, I have people saying to me, ‘God this sucks. I don’t want to go back.’”

So it’s not surprising that almost 25,000 Twitter users have “liked” an emoji mashup that combines the “partying” emoji with the “worried” emoji. The result: a fretful face that looks ready to choke on a noisemaker while confetti streams down like tears.

A picture’s worth a thousand worries!

“Me at every party if we’re being honest,” wrote one person in the comments.

“Party like there’s a new up-and-coming virus in town and you don’t know if you have immunity,” added another.

What’s more, the rapid spread of the more contagious delta variant of COVID-19 in 92 countries around the world has given cause for concern and threatened the long-awaited return to normalcy. While the U.S. Centers for Disease Control and Prevention (CDC) still says that vaccinated Americans can largely go maskless, the World Health Organization (WHO) recommends that even fully-vaccinated individuals should continue to wear masks to protect themselves.

Indeed, about half of all Americans feel “uneasy” about returning to in-person interactions once the pandemic ends, regardless of their vaccination status, according to the recent American Psychological Association’s 2021 Stress in America survey. The report also found that 46% of adults said they don’t feel comfortable going back to living life like they used to before the pandemic.

Granted, the other half of the country has been impatient to get back to traveling, shopping, dining and working in-person. Recently, the Transportation Security Administration screened more than 2 million people for the first time since the onset of the pandemic. Home rental services like Airbnb ABNB, +1.15% and Vrbo, and ride-share apps like Uber UBER, -0.15% and Lyft LYFT, +1.10%, have seen their rates increase to meet the surge in demand as folks hit the road. Americans are also spending more than ever at restaurants, running up a collective $67.3 billion tab in U.S. bars and restaurants in May.

And: Why Uber and Lyft prices are spiking — and how you can get around for less

But there’s still plenty of lingering anxiety about getting coffee or cocktails face-to-face, or squeezing back into office-appropriate attire. When MarketWatch asked followers on Twitter TWTR, -0.61% and Facebook-owned FB, -1.26% Instagram about their biggest worries with actual face-to-face events, their concerns included:

So what can you do to get more comfortable about leaving your cave? MarketWatch spoke with Dr. Hafeez and stress and anxiety coach Sandra Woznicki for tips on getting back out there.

Instead of focusing on what stresses you out, look at what makes you feel at ease right now. “Think about what you are comfortable with today: Being physically close to people? Wearing masks or not wearing masks? Maybe you want to wear looser clothes?” suggested Woznicki. Practice what makes you feel comfortable. “And then check back in tomorrow, or a week from now, and ask yourself how did that change.” And think about what would help ease your fears. “Do I need more information about what working in the office again is going to be like to feel better about going back? How can I set myself up for success?” Woznicki said.

Both health experts likened this return to in-person activities after a long absence to what going back to school each September was like after a summer away from classmates. “That first day, that first week back, there’s a heightened level of anxiety I think we can all remember,” Woznicki said. “But once you get back into the school year, you are much more comfortable, and you feel like yourself again.”

Try on your work clothes.

Don’t put this off. Figure out what still fits, and what may need to be altered or replaced, well ahead of time — whether that’s for returning to the office, getting back into networking events, or attending social activities like brunches, weddings and birthdays.

“And have some outfits prepared and ready to go, so you are not scrambling or freaking out the night before — or the morning of — your first day back in the office,” said Hafeez. The same goes for other in-person events where you want to dress to impress — or just get back into hard pants.

You’ve probably been sleeping later if you haven’t had to factor in a commute for the past year. So it’s time to get back into the habit of rising early again. “Start setting alarms. Try a few different times to see which works best,” said Hafeez. And make them progressively earlier until you’re back in the habit of rising and shining with plenty of time to get to work. This could mean you need to start going to bed earlier, however, to make sure you’re well-rested. Here’s some tips to becoming a morning person.

This can also make you feel more at ease about going back to the office or traveling if you haven’t been on the bus or the subway in over a year, or if you’ve been driving much less and feel anxious about getting back behind the wheel. “Try taking your route on a weekend, and see if you start feeling like, ‘Hey I remember doing this. This feels familiar!’ to acclimate again,” said Hafeez. “Catch the bus. Get on a train.” Just be mindful of local mask mandates and social distancing measures, especially if you are still waiting to get vaccinated.

Now, what if you’re worried about people judging the way you look or act, or if you feel that your social skills may have gotten a little rusty after a year largely spent behind a screen?  “Those anxieties are really coming from the fear: ‘How are other people going to receive me? What if I am not smart enough or likable enough or capable enough?’” said Woznicki. “And those fears trigger negative self-talk like, ‘Everyone thinks you turned into such a weirdo over the last year,’ or, ‘Everyone thinks you’re fat.’ Basically, things that, if you said them to someone else, you would sound like a bully.”

So start practicing positive self-talk. “Step one, notice that, ‘OK, I’m being a bit of a jerk to myself here,’” she suggested. “And motivate yourself with kindness instead of dragging yourself down with self criticism. Talk to yourself like a cheerleader: ‘You’ve got this. You did the best you could over the past year, and now we’re gonna get back out there, and we’re gonna do this!’”

Make a list of the things that were working for you in quarantine — and keep doing them.

“I think that the reason some people liked the quarantine or the slowed-down version of life so much is because they realized how overextended they really were before,” said Hafeez. “And if anything, this [period of transition] can serve as a way to rebalance.”

So maybe the past year has made you realize that going out four nights a week was too much. Dial it back to one or two nights, so that you can keep feeling rested or spending more time with your family. Or perhaps you’ve really enjoyed catching up with friends over videoconferencing calls (“Zoom fatigue” aside). So keep up the regular check-ins and calls with loved ones. And if you picked up a new hobby like baking or bird-watching during quarantine, then stick with it. “Those were all good things,” said Hafeez. “Keep that going.”

If you’re worried about becoming overscheduled and overwhelmed again with work and social obligations, Woznicki suggests declining invitations by phrasing them within a “positive sandwich.”

“So if you’re invited to meet a client in-person, try something like: ‘I appreciate the offer. I am so looking forward to meeting people in person again, but right now I’m not comfortable with it. So this is what we can do instead. Thank you for understanding,’” she said. “Err on the side of thanking people instead of apologizing. You didn’t do anything wrong by having this level of discomfort. Be empowered to say ‘no.’”

And remember: On some level, your brain and muscle memory know how to do all of this. “From a neurological standpoint, the brain is designed to snap back into the things you were always doing. We spent most of our lives getting dressed in the morning, going to work and socializing,” said Hafeez. “So once we start doing that again, the brain will be like, ‘I’ve been here. I know how to do this.’ The anxiety is always worse than the actual event itself.”

“It’s really one step at a time, and saying to yourself, ‘You know what? I did it for many years. It’s not that hard,’” she added. “And everyone else is feeling this way, too.”

U.S stocks slip from highs as Fed vows to use full range of tools to revive economy hit by coronavirus

Next Avenue: Fun jobs and volunteer posts with free perks for retirees

Outside the Box: Why partisanship will increase in the post-Trump era