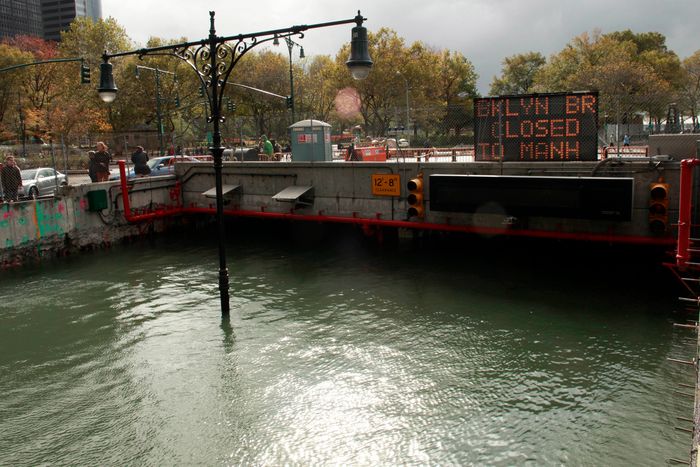 It’s been 10 years since Hurricane Sandy, the massive tropical cyclone that ranked among the biggest in U.S. history, slammed into the U.S. East Coast.

Landfall came on a Monday evening, Oct. 29, 2012. And Superstorm Sandy, churning late in the Atlantic hurricane season, put some 50 million people at risk of flooding, power outages and worse.

New York City and its surrounding metro area transformed into a virtual ghost town for those lucky enough to find shelter, having been warned of Sandy’s destructive winds and record storm surges. The storm surge in Manhattan topped 14 feet.

U.S. stock markets DJIA, +2.59% were closed that Monday due to the weather for the first time in 27 years as a precaution ahead of the evening landfall. Along the Jersey Shore, beaches were decimated, boardwalks reduced to splinters, and a roller coaster lost forever to the sea, as the Philadelphia Inquirer remembers in an oral history.

And here’s how a meteorologist summed up the dangers of Sandy, a “hybrid” storm that tapped additional energy in the atmosphere, which meant it was strengthening as it made landfall — not weakening, as is usually the case near shore.

In all, Sandy caused more than $60 billion in damage, claiming at least 125 lives in the U.S. and knocking out power to more than 7 million customers, some for days and weeks after the storm hit. Flooded offices and some homes remained closed for months.

Here’s a nonexhaustive list: 10 takeaways on the 10th anniversary of Sandy.

Why was Sandy a superstorm?

A superstorm is a storm system that does not have a specific meteorological definition. It is used to refer to storms that are unusually intense and do not fit into any particular category. There’s a difference between a hurricane and a superstorm, though in Sandy’s case both terms were frequently used.

Meteorologists began using the term superstorm in the 1990s.

More on what made Sandy so ‘super.’

How did Sandy compare to other big storms?

No doubt, Sandy was one of the worst hurricanes ever for the U.S. East Coast. But long before smart phones or virtually any means to warn people of a pending natural disaster, and ahead of the naming system that assigns human monikers to tropical storms, the deadliest storm of all to hit New York and the broader Northeast was the 1938 New England hurricane. That storm killed more than 600 people.

More recently, Hurricane Ida brought major destruction to the area in September 2021. Ida’s flash floods killed were deadly from Maryland to Connecticut when remnants of the hurricane blew into the northeast after first striking the Gulf Coast. At least 30 people died in Louisiana.

Ida retained plenty of punch to flood New York’s subway system, kick up seven tornadoes in New Jersey and Pennsylvania, and turn inland Philadelphia’s freeways into canals. Ida cost $65 billion, according to some measures, and 115 lives, including 50 deaths in the less-suspecting Northeast alone. The property damage made it the most expensive natural disaster of 2021, in a year marked by deadly heat in Europe and a Texas deep freeze.

How did Sandy change the climate-change conversation?

By most accounts, the size and economic pain of Sandy energized more people to connect climate change to ever more impactful storms. After Sandy, scientific research earned wider media coverage, including this study linking a warming Earth to rising ocean levels, and connecting that to Sandy’s ability to suck up more water and dump it ashore.

Plus, scientists and economists began to work together, pushing the subject of climate change out of weather stations and lecture halls and into a mainstream conversation around lost lives, lost homes and lost money. One team of researchers connected the dots to find that because we burn fossil fuels CL00, +0.53% to drive, cool our homes and power so much of our lives, we’re making Earth warmer and bringing about human-induced sea-level rise. That rise alone caused an estimated $8 billion in excess flooding damage during Hurricane Sandy. And it affected an additional 70,000 people than it would have without global warming.

Weather (short term) and climate (longer term) are two different factors, and confusing weather with climate has long been fuel for climate-change deniers. Where the two intersect is what matters. Studies show that warming air and ocean temperatures are increasing the odds and severity of heavy precipitation events. That leads to changes in hurricanes that are making them more powerful, and potentially more damaging. As the storms travel across warm oceans, they pull in more water vapor and heat. That means stronger wind, heavier rainfall and more flooding when the storms hit land.

Specifically, for every 1 degree Celsius (1.8 degrees Fahrenheit) increase in temperatures, the atmosphere can hold 7% more moisture.

And more rain is expected if Earth is allowed to warm further. Studies project a 10% to 15% average increase in rainfall rates of tropical storms in a 2 degrees Celsius global warming scenario, according to the site Climate Central.

Did we build back better after Sandy?

After Sandy, thousands of homes were raised on pilings. Concrete and steel walls meant to help hold back the sea were hidden beneath rebuilt dunes and beach boardwalks. Tunnels near New York’s harbor were equipped with giant flood doors.

Still, most future building will need to consider future risks.

Even as recenly as 2021, U.S. infrastructure received an average grade of C minus, according to the 2021 report card released by the American Society of Civil Engineers. Of course, 2021 is also the year that Congress passed, after long long debate, an expansive infrastructure spending bill.

Sea levels at the tip of Manhattan have risen about 8 inches since 1950, according to the National Oceanic and Atmospheric Administration. Estimates range for how much additional sea-level rise is likely to occur, but on average, the expectation is that by midcentury, water levels could rise by more than a foot in New York City, compared with the year 2000.

“We must be more prepared than we are now,” Shawn LaTourette, New Jersey’s environmental protection commissioner, told the Associated Press. “We have done a lot of work since Sandy — developing the dune system, the buildings raised and the flood control infrastructure. [But] we’re still not ready.”

How did insurance change after Sandy?

The federal government offers flood insurance through the National Flood Insurance Program (NFIP), a program administered by the Federal Emergency Management Agency (FEMA) since 1968, a time when affordable private insurance was difficult to find.

But FEMA had often been criticized for an outdated flood map that in part underreported some areas, and in other cases, flagged as high risk a small creek that never once spilled over its banks. Now, more insurance options exist, but so do higher premiums. And, the FEMA map has been updated.

Just this month, the Treasury Department announced it is launching an assessment of worsening extreme weather and its impact on the cost of insurance.

Read: ‘If it rains where you live consider flood insurance’: How Ida exposed insurance loopholes that cost homeowners

Did Sandy change any laws or policies?

With the U.S. keen to avoid a repeat of the painful of lessons of 2005’s Hurricane Katrina, the response to Sandy was arguably much improved. On January 29, 2013, President Barack Obama signed into law the Sandy Recovery Improvement Act (SRIA) of 2013 and the accompanying Disaster Relief Appropriations Act, 2013.  In many ways their passage represented the most significant legislative change to the Federal Emergency Management Agency’s (FEMA) since 1988. The law authorized several significant changes, and was meant to streamline the way FEMA delivers federal disaster assistance to survivors.

Still, a decade later, some homeowners impacted by Sandy remain under water, figuratively. For instance, advocates say New Jersey clawbacks of select relief funds are just the latest insult to Sandy survivors, who waited over a year to receive relief funds, found fraudulent contractors who faced little accountability, and had to navigate a maze of government programs where one misstep could delay recovery for years.

Are there just more hurricanes?

Those back-to-back years marked the first time on record that two consecutive hurricane seasons exhausted the list of 21 storm names.

Is a calendar change in order? The World Meteorological Organization (WMO) and the National Hurricane Center are considering advancing the start date of hurricane season to May 15. And earlier awareness could bring better preparation.

While the storm itensity data has accumulated, it’s not yet clear that climate change is causing tropical systems to occur earlier. So for now, the experts are waiting on redefining the June-November hurricane season. The pause is a solid example of reverence for the evolving nature of science in this area.

Read: As drought ravages the West, any investor not focused on climate risk is ‘really kidding themselves,’ says this portfolio manager

Worried abou the next Sandy? How can we prepare for a hurricane?

For residents and business owners in hurricane paths, and even those just outside the typical reach of the storms, a better understanding of flood risk and insurance needs is one way to prepare for these intensifying seasons.

FEMA collects information on flood insurance for each state and you can check out NOAA’s interactive billion-dollar weather and climate disasters website to find historic events near you.

Using FEMA data, the Natural Resources Defense Council has created an online tool to find repeatedly flooded properties in each state and county, along with National Flood Insurance Program claims.

Pew Charitable Trusts has compiled research on local flood mitigation efforts around the country, and the National Conference of State

Another way to stay prepared is to be ready to evacuate. In calmer times, plan your escape route in the event that a storm or flooding forces you to leave your home fast. Have gas in the car, cash on hand in case ATMs aren’t reachable, and pack your medications and at least a week’s worth of food. Read more ways to prepare.

How did Hurricane Sandy change people?

As might be expected, after Sandy many women were now… expecting.

It may be more urban myth than actual correlation, but it’s always a good story. Sure enough, roughly nine months after Sandy, at least two New Jersey hospitals reported a baby boom.

What is for sure, a storm of this magnatitude was life-changing, as these survivors can attest.