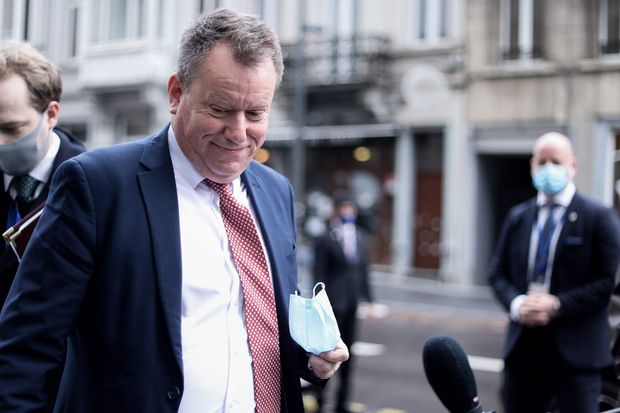 The British pound climbed on Tuesday on optimism that the U.K. will sign a trade pact with the European Union as early as next week. Read More...

The British pound climbed on Tuesday on optimism that the U.K. will sign a trade pact with the European Union as early as next week.

Bloomberg News quoted officials planning for a breakthrough to be announced as soon as Monday. Those officials also sounded the familiar warnings that the talks could fail, with issues including fishing still requiring compromise.

With the departure of Brexit proponents including Dominic Cummings from Prime Minister Boris Johnson’s team, and the election of Joe Biden in the U.S., analysts say conditions are ripe for the U.K. to make a deal. “There appears to be a bit of a power shift behind the doors at No 10. The ‘Leave’ contingent have lost their voice and in some cases their jobs,” pointed out Michael Waugh-Bacchus at Deutsche Bank.

The FTSE 100 UKX, -1.45% dropped 1.4% after the 1.7% surge on Monday when Moderna announced the effectiveness of its vaccine. Besides the lack of a major tailwind, the pound’s rally took its toll. Both of the U.K. drugmakers that are partnering on coronavirus vaccines declined on Tuesday, with losses of around 3% each for AstraZeneca AZN, -2.63% and GlaxoSmithKline GSK, -2.92%.

Imperial Brands IMB, +6.52% jumped 6% as full-year sales and profits rose due to tobacco demand in lockdown. Though the cigarettes maker lowered its dividend by a third — the first time since its spinoff in 1996 — it still sports a 9.6% dividend yield, points out Russ Mould, investment director at AJ Bell.

Intermediate Capital Group ICP, +6.64% shares rose 7%, as the U.K. fund manager reported a 29% rise in its fiscal first-half pretax profit and said it has accelerated its fundraising timetable.

Apple, Netflix Drop Out of SXSW Conference Over Coronavirus Outbreak

In One Chart: Government backstop grows to 98% of new financing in residential mortgage-bond market as private finance vanishes during pandemic

The New York Post: ‘Are you going to shoot us?’ 5-year-old asks Houston police officer, who answers her with a hug