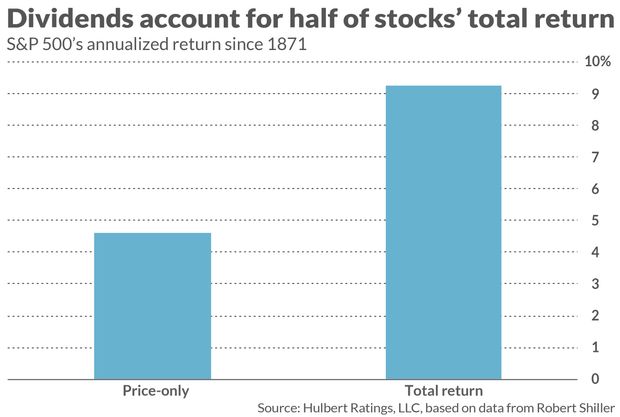 Nearly half of the Dow Jones Industrial Average's long-term total return since 1928 has come from dividends. Read More...

The Dow Jones Industrial Average should be trading not near 32,000 but actually above 1.2 million.

I am not making some wildly bullish prediction about the stock market in coming years. I am instead reporting where the Dow DJIA, +0.97% would be trading now if it had incorporated dividends that component companies have paid over the years, as well as other corporate actions that affect stock prices, such as stock dividends and rights issues.

New research from the National Bureau of Economic Research calculates that had all such events been taken into account since Oct. 31, 1928, the Dow would have closed at 1,113,047 on Dec, 31, 2019. The Dow’s gain over the subsequent 15 months would propel its “true” value currently to more than 1.2 million.

The study’s authors are John Shoven and Clemens Sialm, finance professors at Stanford University and the University of Texas at Austin, respectively, along with Jacky Lin and Genevieve Selden. The researchers tell a sordid tale of the Dow’s construction over the decades — a story that should be filed, along with sausage and legislation, in the category of “if you like it, don’t look too closely to how it is made.”

One of the DJIA’s peculiarities is that it is a price-weighted index, which means that the contribution a stock makes to its performance is a function of how high- or low-priced it is. That makes no theoretical sense.

Consider the highest-priced stock currently in the DJIA, which is UnitedHealth Group UNH, +0.88% with a recent price of about $350 per share. It has a 7.3% weighting in the index, compared to just a 1.0% weighting for Cisco Systems CSCO, +2.72%, the lowest-priced stock in the Dow at close to $48 per share. As a result, Cisco would need to perform more than seven times better than United Health in order to have the same impact on the Dow’s overall return.

One consequence of this price-weighting is that a stock split will have a big impact on a stock’s weight in the Dow, even though the split is an accounting entry with no real-world significance. Consider Apple AAPL, -4.17%, which last summer split its shares four-for-one. As a result of that split, the stock’s weight in the Dow instantly fell by three-quarters. This in fact ended up helping the Dow, since Apple stock has struggled since that split and is now in danger of entering into a bear market.

Another of the Dow’s head-scratching idiosyncrasies is that in some early years it failed to adjust for stock splits for up to several months at a time. Yet another is that, in a number of those early years, split-adjustment factors were rounded to just one decimal point. According to the authors of this new study, this rounding led to discrepancies of as much as 0.4% on the occasion of each split — equivalent to more than 125 Dow points at today’s index level.

Another peculiarity: The Dow treated stock dividends differently than stock splits, even though the two are functionally equivalent. According to the research’s authors, the Dow’s component stocks declared 105 stock dividends between them from 1928 through 2019, only 24 of which were reflected in the calculation of the Dow’s value.

By the far the most consequential methodological decision that the Dow made over the years has been to omit dividends, Professor Sialm told me in an interview. Nearly half of the Dow’s long-term total return since 1928 has come from dividends.

You might think that this heavy reliance on dividends is unique to the Dow, which is constructed from the bluest of blue-chip stocks that typically offer higher dividend yields. But what the researchers found for the Dow is also true for the U.S. stock market as a whole. Since 1871, according to data from Yale University’s Robert Shiller, the U.S. stock market’s price-only annualized return has been 4.6%, almost precisely half of the market’s 9.3% annualized return on a total-return basis. (See the chart below.)

Notice what this means for the near-term, given that the S&P 500’s SPX, -0.54% current yield is just 1.5%. Assuming the future is like the past, and depending on the growth rate of dividends, this low yield points to an expected total return for the stock market from current levels of not much more than 3% annualized. That’s less than a percentage point greater than the 10-year breakeven inflation rate.

Could the future be different than the past?

The bulls have a solid theoretical response to this otherwise dismal projection. According to a longstanding theory in finance, tracing to work in the 1960s by Franco Modigliani, who in 1985 would win the Nobel Prize in Economics, companies that pay out less in dividends should grow faster. That’s because they can reinvest in their own growth what they otherwise would have paid out to shareholders. A lower dividend yield therefore should translate into an accelerated earnings growth rate and a higher stock price.

If so, stocks’ total return should not be affected by a lower dividend yield, since price appreciation would compensate by making a correspondingly greater contribution.

Crucially, Modigliani advanced his theory when share repurchases did not play a big role in the stock market, and his theory may need to be modified to account for them. If companies take the money they save from paying out fewer dividends and spend it on repurchases instead of investing it in their future growth, then a lower dividend yield may not translate into accelerated subsequent earnings growth.

Whether or not it does depends crucially on whether companies repurchase shares when they are undervalued. Their track record here over the past two decades is not encouraging.

This means we can’t automatically assume that today’s low dividend yield will mean that, in coming years, price appreciation will constitute a greater proportion of stocks’ total return. In an email, Robert Arnott, founder of Research Affiliates, pointed out that dividends over the past two decades have represented just as big a proportion of stocks’ total return as in prior decades when dividend yields were much higher. For the 20 years through 2020, Arnott wrote, “the real return on stocks (S&P 500) was 3.8%, of which dividend yield contributed exactly half.”

To be sure, Sialm added, theory quickly gets complicated when trying to assess the interactions between dividends, price appreciation, and buybacks. There is no guarantee that price appreciation won’t make up for the market’s low current dividend yield. Nevertheless, he continued, it is likely that stock investors face an extended low-growth era.

More: The FAANG stocks, in these uncertain times, are expected to rise as much as 35% over the next year

Plus: These teens are having fun in today’s stock market, and, for the most part, making money — here are the secrets to their early success

FA Center: If a financial adviser can’t say ‘yes’ to these 2 revealing questions, save your money for one who can