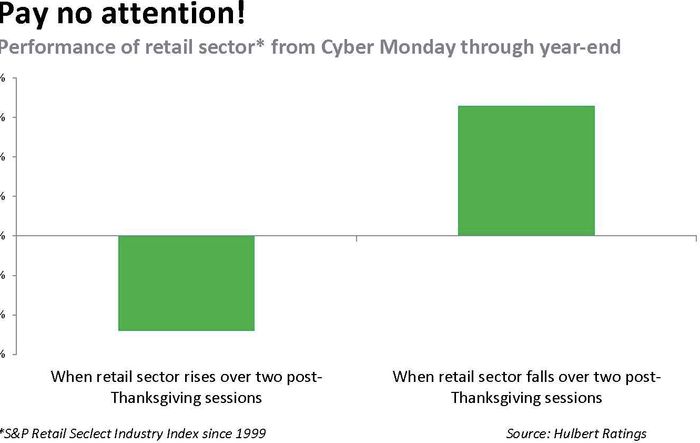 There’s one more thing you should avoid talking about during Thanksgiving dinners and other social events: how U.S. retailers are faring with their Thanksgiving weekend sales.

That’s because initial reports provide no insight into the strength of the retail sector in particular or the U.S. economy in general.

In fact, the reports are worse than worthless. More often than not, they lead you in the wrong direction. For example, if initial reports show retail sales are weaker than expected and the stock market falls, it more often than not will reverse itself and rise through the end of the year. Just the opposite tends to happen when initial reports show stronger-than-expected sales.

These are the conclusions I reached upon analyzing the post-Thanksgiving behavior of the S&P Retail Select Industry Index SPSIRE, +0.32%. Specifically, I compared this index’s two-day return following Thanksgiving with its performance after Cyber Monday through the end of December.

In 73% of the years since the index was created in 1999, its direction in that initial two-day post-Thanksgiving window was the opposite of its direction from then until the end of the year.

The chart below summarizes what I found for the performance of the retail sector over the Cyber Monday through year-end period. Notice that it performed quite well, on average, in years in which it fell over the first two post-Thanksgiving trading sessions — and vice versa.

I was unable to find any other time of year in which there was a strong inverse correlation between returns during a given two-day period and performance over the subsequent five weeks. The normal pattern is for there to be no correlation one way or the other.

Perhaps this inverse correlation for the Thanksgiving through year-end period is caused by an interaction between investors’ tendency to overreact and the exaggerated importance they place on the Black Friday and Cyber Monday sales reports.

So when a straw blowing in the wind suggests those sales are going well, investors overreact and conclude that happy days are here again. When reality sinks in over subsequent weeks, as it almost invariably does, the market corrects.

Just the opposite occurs when the initial tea leaves suggest that Thanksgiving sales were disappointing.

If this explanation is accurate, this year should see an especially strong post-Thanksgiving reversal pattern. That’s because of the widespread current speculation that a recession is imminent, which means even more attention than usual will be paid to what the Thanksgiving sales indicate. So if the initial sales reports are disappointing, the headlines will boldly declare that a recession must have already started — and vice versa.

To be clear, the inverse correlation I found in the data is not strong enough to justify a trading strategy that bets on the retail sector moving opposite over the last five weeks of the year from how it performs during its first two post-Thanksgiving trading sessions. The most important investment implication is that you should pay no attention to how retailers are doing with their Thanksgiving sales.

Also read: Black Friday can offer investors clues about how much gas consumers have left in the tank: Here’s what to watch out for

Plus: What Walmart and Target’s very different earnings mean for a white-collar recession