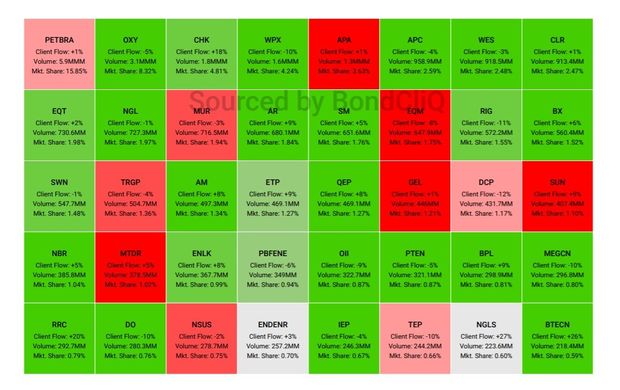 The Biden administration wants to steer the American economy away from fossil fuels that contribute to climate change. So why are oil prices and energy stocks and bonds rallying? Read More...

About nine months ago, oil futures did a crazy thing and briefly crashed into negative territory, marking a low point of a historic bear market for the commodity.

But this week, oil reclaimed its 12-month highs, with U.S. benchmark futures CL.1, +0.66% settling at $56 a barrel Thursday and global Brent crude BRNJ21, +0.59% closer to $60, even as President Joe Biden used his first weeks in the White House to place curbs on the U.S. fossil-fuel industry.

Climbing oil prices have put energy stocks back in vogue and propelled a bond rally in energy names, even the weaker ones. They also have investors thinking about the next chapter for the energy complex, after a gut-wrenching 2020 marred by the outbreak of an oil price war and the worst pandemic in a century.

“You need to remember, energy had a terrible year last year,” said Ken Monaghan, co-director of high yield at Amundi Pioneer, while pointing to the surge in defaults at the onset of the pandemic, which began to subside after the Federal Reserve stepped in to buy corporate debt for the first time ever.

“One issue the industry had was that with prices in the $30s and low $40s, the industry doesn’t make money,” Monaghan told MarketWatch. “But at $50 dollars a barrel or $55, you’re looking at a different story.”

The turmoil of last year led to nearly $79 billion worth of high-yield bond defaults, distressed exchanges and bankruptcies, mostly from the energy and retail sectors, according to BofA Global. Occidental Petroleum Corp OXY, +1.27% and 37 other formerly investment-grade companies also became “fallen angels,” after their ratings were downgraded to speculative-grade, or “junk,” territory.

The U.S. high-yield corporate bond index rose about 6% for the year, even while its large energy component fell by about 6.6%, Monaghan said.

“ “Investors should be preparing for a green future, but they should also realize that it is a process, not an overnight fix.” ”

But in recent months, the fortunes of oil and gas producers have begun to look up, said Matt Kennedy, portfolio manager at Angel Oak Capital Advisors. The energy sector notched the best high-yield returns out of nearly two dozen industries in January, for a third straight month.

Kennedy said the COVID-19 vaccine rollout has been a stabilizing catalyst, with the expectation that oil demand gradually will get a boost as the economy recovers, but also the likelihood that higher prices can be supported if U.S. and global crude outputs remain in check.

This chart shows bonds from 27 U.S. high-yield energy companies rallied so far this year, versus 11 that sold off, according to BondCliq data.

Occidental Petroleum ranks as a top gainer, but so is struggling shale-oil company Chesapeake Energy Corp., which plans to borrow $1 billion as it looks to exit bankruptcy, Reuters reported.

The rally in energy has come even while Biden has acted fast to halt construction of the long-disputed Keystone XL pipeline, set to run from Canada to Texas, and hit pause on oil and gas leasing on public lands and waters.

But as Kennedy pointed out, the new permit freeze would only gradually taper production, and only on federal water and land. The Wall Street Journal pegged onshore federal land output at about 9% of the U.S. total. On the flip side, many companies already started stockpiling permits in anticipation of coming curbs, which means federal property still could see drilling into the future.

“The Biden policies of banning new permits for drilling on federal land and the Keystone pipeline policy are very favorable for less oil supply in the U.S.,” said Tracy Chen, a portfolio manager with Brandywine Global’s fixed-income team, noting that she sees the potential for oil prices to climb as high as $70 a barrel.

“The sentiment was as negative as you could get, which makes a bottom,” said Eric Diton, president of The Wealth Alliance, an investment adviser.

But despite the Biden administration’s focus on combating climate change, which looms large over fossil fuels, Diton expects it to take a long time before “you can run the world on renewables.”

John LaForge, head of real asset strategy at Wells Fargo Investment Institute, also wants investors to prepare for a future of greener energy, but views renewable and green technology as too young to absorb the world’s energy needs.

“Fossil fuels, at 80% of total energy use, still dominate the U.S. energy landscape,” LaForge wrote this week in a client note, which included the following chart of fossil fuel use over time:

“The point is that investors should be preparing for a green future, but they should also realize that it is a process, not an overnight fix,” he said.