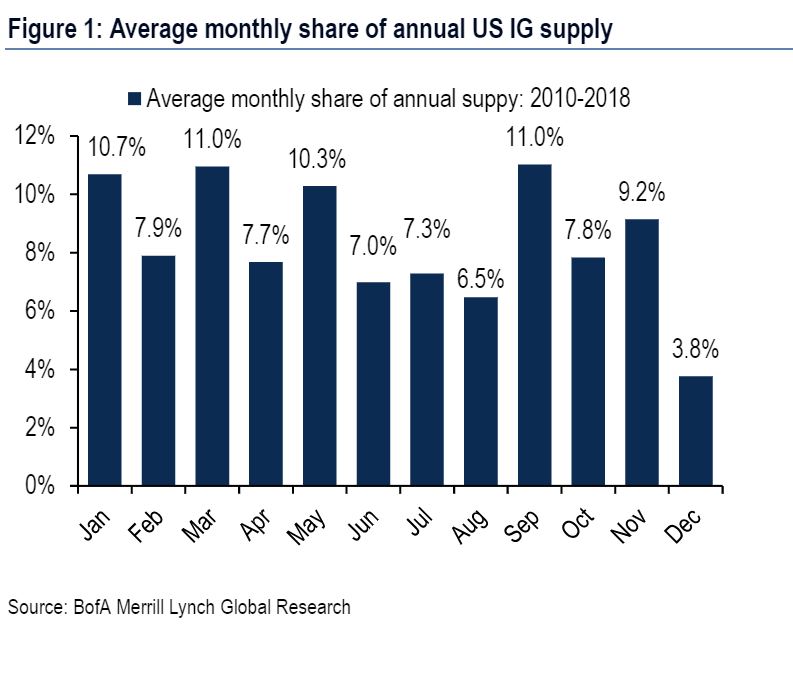 The busiest month of the year for U.S. high-grade bond issuance is often September, with Bank of America Merrill Lynch forecasting another $120 billion to $130 billion deluge of supply after Labor Day. Read More...

Once September rolls around, its go time for U.S. companies looking to borrow big in the bond market.

September often has been a top month for high-grade bond issuance after banker, borrowers and investors shake the sand out of their shoes from summer.

Check out: Labor Day: Which markets are closed?

The post-Labor Day pictures looks to be little different this year, with Bank of America Merrill Lynch forecasting $120 billion to $130 billion of supply for the month ahead, of which $35 billion to $45 billion could flow during next week alone.

To put those figures into perspective, New York City adopted a $92.8 billion budget to keep the city up and running in the 2020 fiscal year, which includes funding for libraries, parks and social services.

But for corporations, borrowing increasingly has been the lifeblood of doing businesses with the past decade seeing a record amount of debt borrowed at low rates in the high-grade bond market, partly to grow business but also to fund stock buybacks, mergers and acquisitions.

Check out: Opinion: the investing opportunity of a lifetime awaits us when the recession arrives

The following chart shows elevated high-grade corporate bond issuance in the months of March and September over an eight-year stretch.

But over a shorter, five-year run-rate, September has come out on top with $131 billion of new monthly bond supply, according to Bank of America Merrill Lynch data.

On the other hand, U.S. stocks typically have a rough time in September, particularly after a bumpy ride in August.

The Nasdaq Composite Index COMP, -0.33%  was trading lower Friday, while the Dow Jones Industrial Average DJIA, +0.20%  and S&P 500 index SPX, +0.05% were in positive territory and all three were on track to post a healthy weekly gain.

Meanwhile, the September deluge of bonds could come with the caveat that more of the proceeds go toward lowing leverage at the corporate level.

“As the change in corporate behavior has shifted issuance away from supporting re-leveraging activities toward refinancing in the currently low interest rate environment, September should follow a similar pattern,” wrote BAML analysts led by Hans Mikkelsen, in a recent note to clients.

Replacing older debt with new bonds at lower rates is one way to cut leverage, which also could help calm fears about the bulging BBB-rated bracket of high-grade bonds that are one step away from junk. Another way to shrink debt is to sell assets.

Among the companies gearing up to issue high-grade bonds is Danaher Corporation DHR, +0.22%, which Bank of America said was scouting out investor interest in Europe for a potential euro-denominated offering.

Danaher is expected to raise funds for its $21 billion purchase of General Electric’s GE, +1.05% biopharma business, a sale that also aims to help GE manage its massive debt load.

Meanwhile, Bank of America Merrill Lynch analysts don’t expect borrowers to slam on the brakes to borrowing just yet. They project $1.187 trillion of total high-grade bond issuance to flow by the end of 2019, only a 4% annual drop from last year’s volume.

Canopy Growth Corporation (CGC) Stock Moves -0.1%: What You Should Know

When Netflix Reports Earnings, Keep an Eye on Subscriber Data