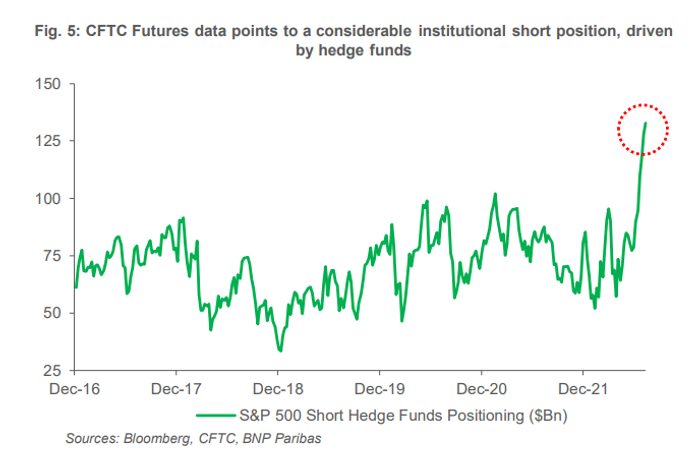 A more than $125 billion institutional short position is building up against the stock market, driven by hedge funds, according to BNP Paribas. Read More...

A more than $125 billion institutional short position has been building up against the U.S. stock market, driven by hedge funds, according to BNP Paribas.

Futures contract data points to a sharp increase in the amount of bets against the S&P 500 index SPX, -1.29% in recent months, even though the stock-market gauge has climbed nearly 17% from its mid-June low when it tipped into a bear market.

Greg Boutle, head of U.S. equity derivatives strategy at BNP, said positioning has “remained defensive,” in a client note this week, which highlighted the growing short position (see chart) against the stock market.

Boutle said that despite signs of U.S. inflation cooling from 40-year highs, it likely would take “a larger and more persistent improvement in the macro outlook, to drive a larger scale reallocation of institutional money back into equities.”

The S&P 500’s sharp climb has hit resistance this week as the benchmark approached its key 200-day moving average.

“At this point, after the 17% rally, all the energy is gone to push higher,” said Keith Lerner, co-chief investment officer at Truist Advisory Services, by phone. “But there could be a pain trade, if the market breaks out of short-term consolidation.”

Still, any breakout higher likely would be short-lived, he said, given high stock-market valuations and expectations for further global tightening of financial conditions.

Peter Cardillo, chief market economist at Spartan Capital Securities, said that bearish bets preparing for a type of 2008-style global financial crisis would be “bullish for stocks,” since he thinks a downturn of that magnitude would be unlikely in the current environment.

As investors wrangle with questions about the durability of the U.S. economy as the Federal Reserve raises rates, billions have poured into funds (see chart) that consistently create a “net short” exposure to the overall market.

So far, those bets have been paying off, according to Jack Fischer, senior research analyst at Refinitiv Lipper.

U.S. diversified equity funds returned an average of negative 14.2% on the year through Aug. 4, according to Refinitiv Lipper, but its dedicated short-biased funds were up 8.8% for the same stretch, when excluding those classified as focused on commodities.

“The debate can continue whether or not we are in a recession, but what we can see is that there is both growing demand and supply for exposure betting against the overall market,” Fischer wrote, in a recent client note.

See: Proceed with caution if you trade stocks based on this popular market signal