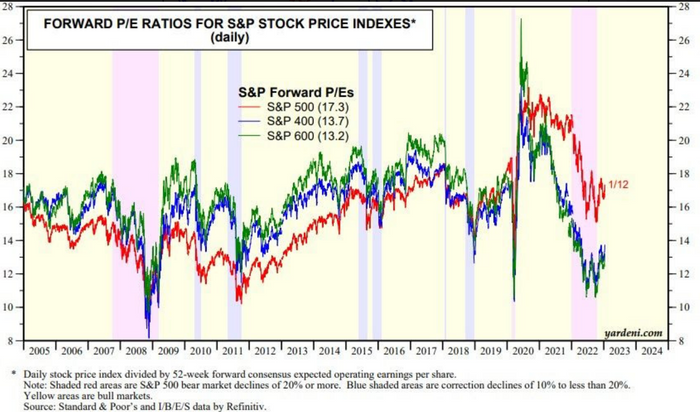 Small-cap stocks are outperforming large-cap U.S. equities this year, in an upbeat start to 2023 after suffering steep losses last year.

“Typically you get these long cycles where small or large leads, and we’re just coming out of an 11-year period  where large beats small by a meaningful amount,” said Rayna Lesser Hannaway, a portfolio manager at Polen Capital who focuses on small-cap stocks, in a phone interview.

“Small-cap just looks really attractive on a relative valuation basis,” she said. “Small-cap typically tends to lead in the second half of interest-rate tightening cycles.”

Small and mid-cap stocks “anticipated the bear market of 2022 back in 2021 as their valuation multiples plunged well ahead of the drop in the forward P/E of the S&P 500,” according to a Yardeni Research note Friday.

Forward price-to-earnings ratios, or P/E, for small and mid-cap stocks “seem to have bottomed during the bear market and may now be pointing higher,” Yardeni said in the note. “They are certainly cheap” relative to large-cap stocks.

“In this past year, there’s been a lot of higher-quality, small growth companies that have both fiscal discipline and managerial experience” to continue to grow even in a “tough” environment, she said. “That’s been largely ignored by the market as these stocks experienced a really significant drawdown without a lot of focus on the individual company fundamentals.”

As for small-cap stocks, the Russell 2000 was up around 0.5% Friday afternoon, while the S&P Small Cap 600 gained 0.6%. Both indexes were also on pace to rise for a second straight week this year, with the Russell 2000 showing a weekly gain of slightly more than 5% to outperform the S&P 500’s 2.6% weekly rise in late afternoon trading.