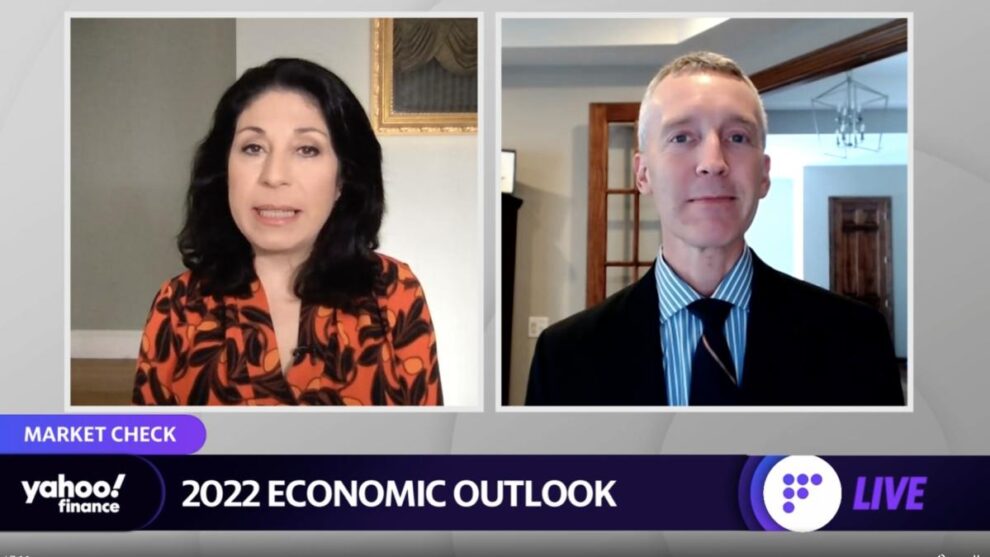 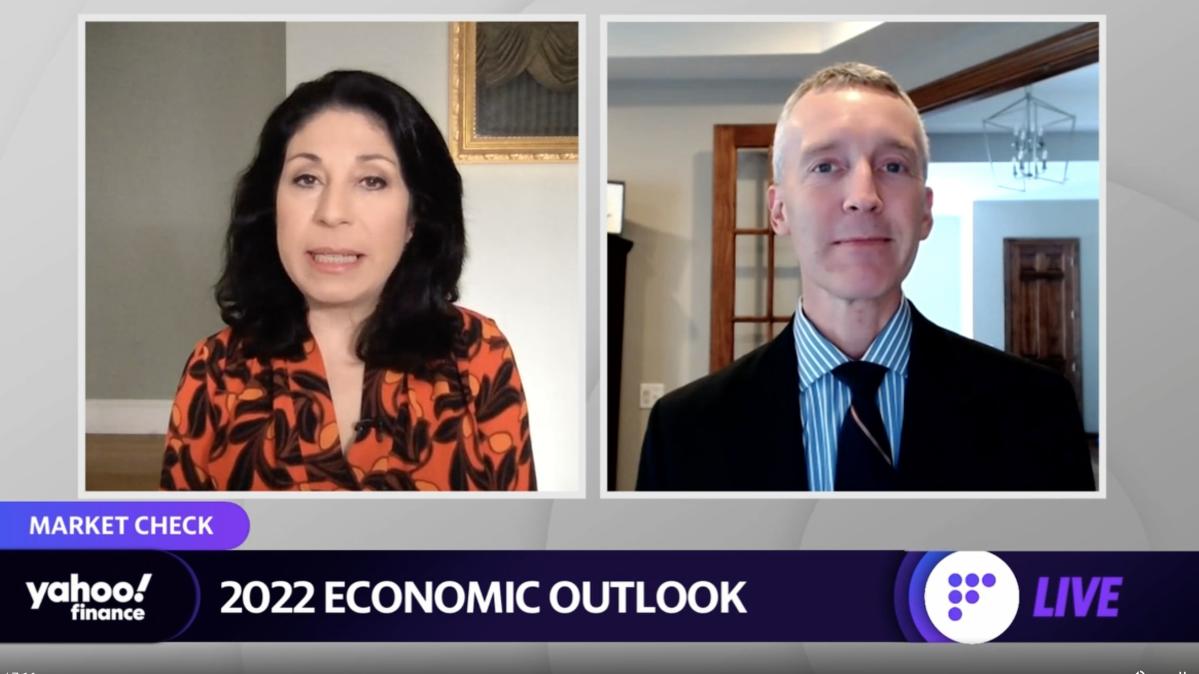 KARINA MITCHELL: I think Alexis may have frozen there.

ALEXIS CHRISTOFOROUS: What are your expectations for– for this year?

BRIAN JACOBSEN: Yeah, thank you for having me on– really appreciate it. So our expectations is actually that, if you kind of stay the course with a nice, balanced portfolio– we’ve been overweight equities for a good chunk of the last year and a half or so– that– that it will probably play out pretty well. Our expectation is that we’re actually going to have better growth in 2022 compared to the latter half here of 2021 not just in the United States, but globally.

Growth has been very erratic, seems very tentative because it was almost at threat with any sort of lockdown or a new wave of COVID. And we think that a lot of those fears are likely to subside. And so we do still see some decent upside here for equities, broadly speaking.

KARINA MITCHELL: And I want to ask you, sir, what is the health of the consumer in this coming year? Because they’re dealing with such high inflationary costs. We’ve seen companies like Mondelez, Pepsi, and Coca-Cola saying right off the bat, January, we’re– we’re raising prices. We know that shelter costs are going up. Gas is going up. What is their spending power? When do they put their hands up and say, we can’t do this anymore?

BRIAN JACOBSEN: Yeah, I think that is a great question here. If we look at some of the more recent data as far as personal incomes relative to inflation, even though personal income growth has been pretty decent, it actually hasn’t been enough to keep up with rising prices. And so we are seeing this inflationary pressure, and in a way, it already is kind of eating into consumer spending.

Now, thankfully, a lot of consumers seem like they have had some reserves as far as with increased savings, and we believe that the handoff really needs to happen from those reserves and savings to stronger wage gains. And as long as you get better productivity growth with those wage gains, that doesn’t have to feed any sort of, like, wage-price inflationary spiral.

So inflation is a concern. We do believe that it actually is going to abate as we go from the first quarter into the second quarter of 2022. A lot of it, we do believe, is mainly driven by supply-chain issues. There is some– You know, a demand surge with supply-chain problems isn’t really a good combination when it comes to inflation, but that is a temporary phenomenon. It’s not transitory, right? But it is, we still believe, temporary and that we should see things begin to improve come around about March or April of 2022.

ALEXIS CHRISTOFOROUS: And Brian, what are your thoughts on big tech? I mean, we saw Apple now hit a $3 trillion market cap. Last hour, we had on Paul Schatz of Heritage Capital. He’s very lukewarm on– on big tech for 2022. Where do you stand?

BRIAN JACOBSEN: Yeah, I think that we would generally agree as far as being somewhat lukewarm. It really depends upon the companies and the areas that we’re looking at. We are expecting that we will see a continued investment in property, plant, and equipment by businesses. And so if you kind of move down the capitalization spectrum a little bit– that is, instead of the really big tech, maybe the medium-sized tech and small tech– that’s the area to us that’s a little bit more interesting.

And so as a result, we would tend to prefer– like, let’s say if you want to generically call it mid-cap growth or small-cap growth. We think that there are some compelling opportunities there. But keep in mind, it is likely going to be a roller-coaster kind of ride when you’re investing in those more speculative areas.

And so we like to balance that out with some of the more higher-quality names that you can find on the value side of the spectrum, not just in small cap and mid cap, but also in the large cap. And so as a result, our portfolios have a little bit of a bias towards some of those cash cows like energy companies and also financials right now.

KARINA MITCHELL: And then just going back, I want to touch on the small-cap issue because, you know, you had the likes of companies like IKEA that have just come out and said that, look, we’re forced to raise our costs– on average, 9%. This is a company that, you know, rents and buys their own containers to get goods across the world and deliver. So when they say they’re hiking prices and passing on to the consumer, what does that bode for small-cap companies and other businesses that just can’t compete?

And then other question I wanted to ask you is that, you know, what do you think of emerging markets and particularly China as an investment area as well? Because we hear so little about what’s going on in China, but they are starting to ease regulation. So I wonder if big tech isn’t as attractive as it may have been last year here. What about tech in China?

BRIAN JACOBSEN: Yeah, that’s actually– let’s start with the last part first as far as tech in China. That’s an area– we think China is going to be a very interesting market to be exploring in 2022. We’ve been underweight China, thankfully, because it was down, I think, about 20% in 2021. You had the tech crackdown. You also had with education services.

We do think that the pivot by the central bank to try to support the real economy will eventually be beneficial and that they should provide more liquidity to the broader financial markets. Now, it is likely to be one of those things where it probably pays to have somebody with some domestic experience there, mainly because we know that the governments between the US and China– they don’t exactly look too favorably on companies from outside of their own borders.

And so it might be more, what’s the domestic-grown tech company in China to invest in in China? And so we work with some very good, active managers to try to pick those particular spots instead of thinking that US companies are necessarily going to just be able to excel in that market. We don’t think that’s the market going forward for China.

Now, when it comes to small caps, interestingly, you’re right. Small-cap companies have historically kind of struggled from a profit-margin perspective with high inflation, but their market prices, their stock prices, actually have done pretty well. If you look at the history of, say, going back to 1930, 1970, 1980, small-cap stocks actually were one of the best performers in those higher-inflation environments. And it’s mainly because the equity prices before the inflation hit didn’t really advance as much as what you saw with large cap.

So the market was forward looking, anticipating the inflation, and we think that’s kind of the story here now. The market’s already pricing in a decent amount of inflation for the foreseeable future. And so that– that headwind to earnings is probably already reflected in quite a few of the price-to-earnings multiples.

ALEXIS CHRISTOFOROUS: All right, Brian Jacobsen of Allspring Global Investments, thanks for joining us today.

Netflix Is Moving Closer to Investment-Grade Status
Project Syndicate: To defuse the culture wars, we should start by decluttering our language of meaningless words and phrases
Comment