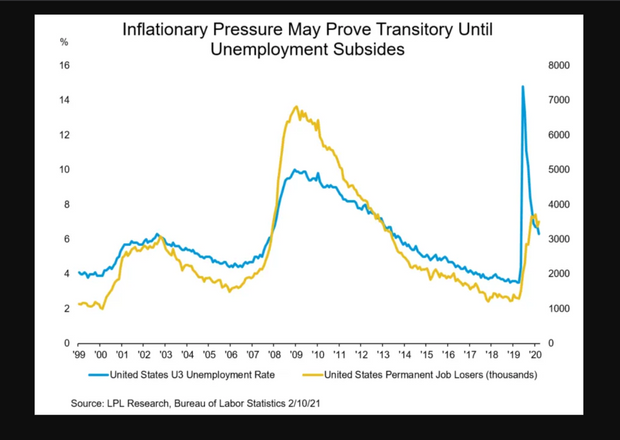 When America’s amusement parks and baseball stadiums no longer must serve as COVID-19 mass vaccination sites, some investors believe that households pocketing pandemic financial aid from the government might start to splurge.

While a consumer splurge could initially boost the parts of the economy devastated by the pandemic, a bigger concern for investors is that a sustained spending spree also could cause prices for goods and services to rise dramatically, dent financial asset values, and ultimately raise the cost of living for everyone.

“I don’t think inflation is dead,” said Matt Stucky, equity portfolio manager at Northwestern Mutual Wealth Management Company. “The desire by key policy makers is to have it, and it’s the strongest it’s ever been. You will see rising inflation.”

Wall Street investors and analysts have become fixated in recent weeks on the potential for the Biden Administration’s planned $1.9 trillion fiscal stimulus package that targets relief to hard-hit households to cause inflation to spiral out of control.

Economists at Oxford Economics said on Friday they expect to see the “longest inflation stretch above 2% since before the financial crisis, but it’s unlikely to sustainably breach 3%.”

Severe inflation can hurt businesses by ratcheting up costs, pinching profits and causing stock prices to fall. The value of savings and bonds also can be chipped away by high inflation over time.

Another worry among investors is that runaway inflation, which took hold in the late 1970s and pushed 30-year mortgage rates to near 18%, could force the Federal Reserve to taper its $120 billion per month bond purchase program or to raise its benchmark interest rate above the current 0% to 0.25% target sooner than expected and spook markets.

At the same time, it’s not far-fetched to argue that some financial assets already have been inflated by the Fed’s pedal-to-the-metal policy of low rates and an easy flow of credit, and might be due for some cooling off.

U.S. stocks, including the Dow Jones Industrial Average DJIA, +0.09%, S&P 500 index SPX, +0.47% and Nasdaq Composite COMP, +0.50% closed on Friday at all-time highs, while debt-laden companies can now borrow in the corporate “junk” bond, or speculative-grade, market at record low rates of about 4%.

Read: Stock market stoked by stimulus hopes — what investors are counting on

In addition to rallying stocks and bonds, home prices in the U.S. also have gone through the roof during the pandemic, despite the U.S. still needing to recoup almost as many jobs from the COVID-19 crisis as during the worst of the global financial crisis in 2008.

This chart shows that jobs lost to the pandemic remain near to levels seen in the aftermath of that last crisis.

Fed Chairman Jerome Powell said Wednesday that he doesn’t expect a “large or sustained” outbreak of inflation, while also stressing that the central bank remains focused on recouping lost jobs during the pandemic, as the U.S. looks to makes serious headway in its vaccination program by late July.

Treasury Secretary Janet Yellen on Friday reiterated a call on Friday that the time for more, big fiscal stimulus is now.

“Broadly, the guide is, does it cost me more to live a year from now than a year prior,” Jeff Klingelhofer, co-head of investments at Thornburg Investment Management, said about inflation in an interview with MarketWatch.

“I think what we need to watch is wage inflation,” he said, adding that higher wages for upper income earners were mostly flat for much of the past decade. Also, many lower-wage households hardest hit by the pandemic have been left out of the past decade’s climb in financial asset prices and home values, he said.

“For the folks who haven’t taken that ride, it feels like a perpetuation of inequality that’s played out for some time,” he said, adding that the “only way to get broad inflation is with a broad overheating of the economy. We have the exact opposite. The bottom third are no where near overheating.”

Klingelhofer said it’s probably also a mistake to watch benchmark 10-year Treasury yields for signs that the economy is overheating and for inflation since, “it’s not a proxy for inflation. It’s just a proxy for how the Fed might react,” he said.

But with last year’s sharp price increases, is the U.S. housing market at least at risk of overheating?

“Not at current interest rates,” said John Beacham, the founder and CEO at Toorak Capital, which finances apartment buildings and single family rental properties, including those going through rehabilitation and construction projects.

“Over the course of the year, more people will go back to work,” Beacham said, but he added that it’s important for policy makers in Washington to provide a bridge for households through the pandemic, until spending on socializing, sporting events, concerts and more can again resemble a time before the pandemic.

“Clearly, there likely will be short-term consumption increase,” he said. “But after that it normalizes.”

The U.S. stock and bond markets will be mostly closed on Monday for the Presidents Day holiday.

Retailers cash in on Amazon's 'free marketing' on Prime Day