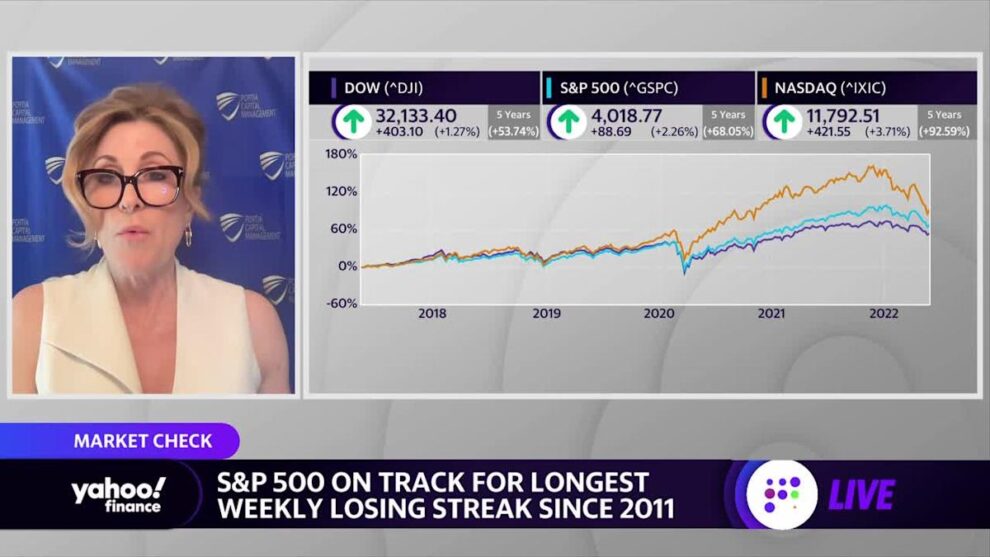 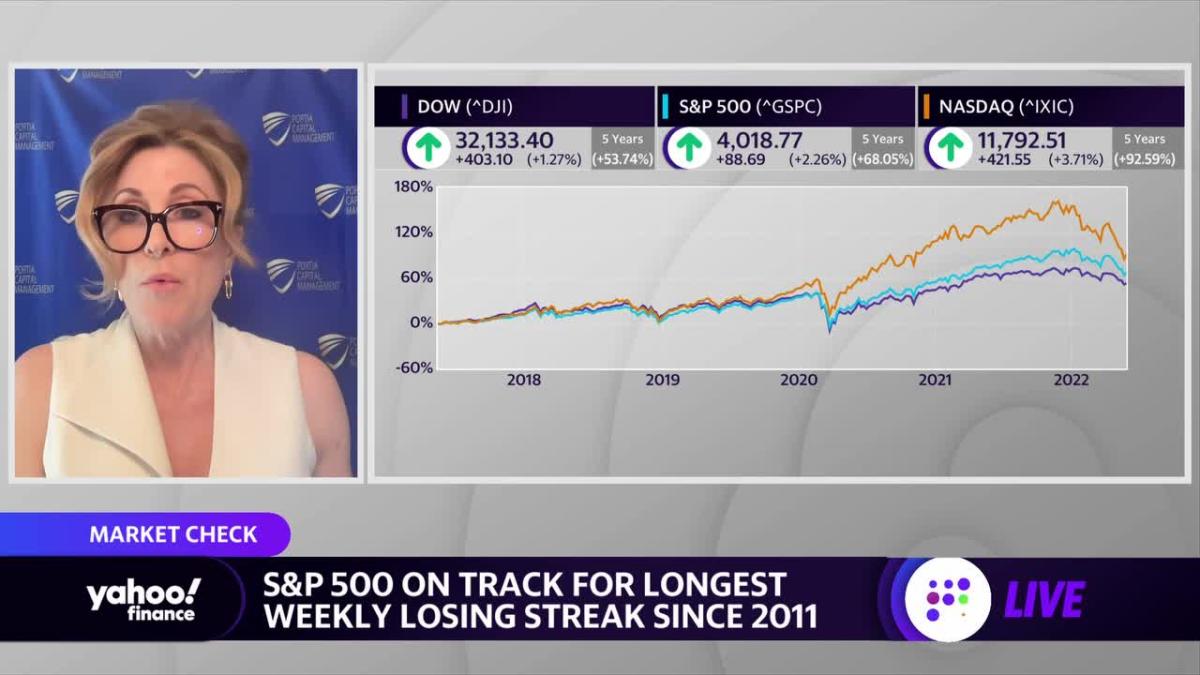 – All right, good stuff. For more on today’s market action, let’s bring in Michelle Connell, CFA, and owner of Porsche Capital Management. Nice to see you, and happy Friday. So what do you attribute the market rally, in particular with tech?

MICHELLE CONNELL: I think the market, in general, is just relieved with some of Powell’s remarks in the last few days. The fact that he’s kind of sidestepping that he will increase rates at a higher rate and a faster rate. So I think there’s some relief there. And I think to a degree, we’re also oversold in some of the names. I mean, we’ve had the entire market flushed out since the beginning of the year, and that includes some good strong names. So I think people are starting to come back in and get some interest.

– Now, I do want to ask you about some of these fears in the market. Do you think we’ve reached the bottom of this, or are we going to continue to see this volatility?

MICHELLE CONNELL: I don’t think I’m going to answer that question because then I’m going to be held accountable. I don’t think any of us can call the bottom. But what I think is interesting is that we’re still sitting on a lot of cash. And you look at the fact that most recessions have been caused by some sort of credit issue or crisis. We don’t have any of those looming in the near term. We’ve got strong balance sheets with consumers in general. Corporations are sitting on a lot of cash. And a lot of them had also renegotiated their credit, et cetera, so that they had lower costs.

So I think, yes, we may have another quarter of negative GDP, but I don’t think we’re looking at a really severe recession. And I think that’s kind of what the market had been anticipating was the worst-case scenario.

– Michelle, you talk about consumer balance sheets, but this morning consumer sentiment slid to its lowest level in a decade, according to the University of Michigan. Is this a sign that key pillar of US economic activity is starting to crumble, and is that going to take the rest of the economy with it?

MICHELLE CONNELL: It’s something that we are going to have to watch. I think Yahoo Finance had an article this week about the average consumers paying an additional $312 a month in goods and services to keep their family afloat and going, and that’s a serious thing. But at the same time, we have a lot of pent-up demand for the things that people haven’t done since COVID. You have a lot of travel that people would like to be able to participate. They want to get out, and they want to be a consumer again if they can. They want experiences.

So I think, yes, it’s something that bears watching, especially for what the average consumer is paint. But at the same time, they’re going to be parts of the economy that will continue to flourish.

– Moody’s puts that number at $450 extra month. Michelle, today probably helped your phone stop ringing based on the market action. But prior today, you said you’d received a lot of calls from friends, from peers, panicking, and I hear panic from all over the country. What do you tell them when they ask you is it time to get out of the market?

MICHELLE CONNELL: This is interesting to me because I didn’t hear this kind of panic at the beginning of the pandemic, but now we’re hearing it. I think the difference is that people had been so satisfied with what they saw in their investment accounts, their 401(k) balances, and now they’ve got this shock where they’re opening up their statements. This week I had a new prospect come to me and say I opened up my statement. I’m down at $180,000. You know, what’s going on?

So I think people saw where things had– how much they had made. And now they’re starting to see, well, those balances don’t look so great. And people are concerned, especially if they’re closer to retirement, or they’re in that stage where they’re taking money, or they need that money out of their investment account.

– So then, in terms of the opportunities to be found in this kind of environment, what do you like, and what’s the best way to approach trying to balance your portfolio in this sort of environment?

MICHELLE CONNELL: I think there are some good bargains across sectors. I still like some oil names, some LNG or gas names. There are some upside there. I will say that there are some names that also have downside there, so you have to be very specific about what you’re buying in terms of its upside versus how much it has gone down and how strong are they in terms of their resources. So I like things like Exxon. And I also like EOG Resources. They are very strong in terms of oil and gas production.

And I also like even things like agriculture and food. John Deere is like about 15% off its high in April. We may see higher demand for agriculture equipment because, frankly, domestic farmers are benefiting from what’s going on in the rest of the world. So maybe they’ll put some of those profits into farm equipment. And then, being the tech person I am, I always like looking at the semiconductor names and also Microsoft. Things that generate a lot of cash flow and will continue to do so even if we go into a mild recession.

– Michelle, the latest quarterly earnings season is now winding down. We do have some major retailers reporting next week. But based on what we’ve heard so far the past several weeks, what were some of your big takeaways, and what do you think this is saying about the strength of corporate profits in this environment?

MICHELLE CONNELL: I think overall, they’re still fairly strong. I mean, if we did have some companies that were cautious in terms of their costs and/or their ability to pass them on to a consumer, but overall, it seemed pretty positive. And in several areas, you actually saw estimates being taken up for the rest of the year as well as price targets. So there again, I don’t think it’s as negative as the market had baked in through yesterday, at least.

But that does not mean that this is a bottom because it’s about emotion, and we’ve had a lot of passive ETF outflows that have affected the market. And so be patient by the names that you have some conviction in.

– I know it’s not your particular space, but I think sometimes that makes it all the more important to hear your takeaway from the crypto crash, as some are calling it. $200 billion gone in 24 hours. More than a trillion in wealth shed in six months. What is your big picture takeaway from that?

MICHELLE CONNELL: You’re right. I’m not an expert in that, Dave. And it’s hard for me to get my head around that as somebody who really likes strong cash flow and fundamentals. This is hard for me to understand. Frankly, I’d rather own fintech that’s supplying the cryptocurrency. I find it interesting that crypto was supposed to be a hedge for situations like this downdrafts as well as inflation. Obviously, it has not.

For me, it’s difficult to put this in someone’s portfolio and then watch it go down. How am I going to explain why it’s down? I still don’t know how to do that. Until I can, I’m not going to allocate to it.

– All right, we’ll leave it there for now. Michelle Connell, CFA, and owner of Porsche Capital Management. Thank you so much.