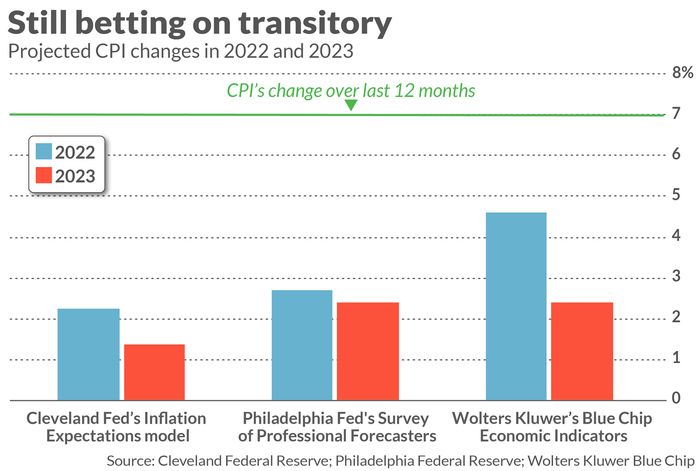 Most inflation forecasters do little more than extrapolate the recent past into the future. Read More...
List: The Top 50 Dividend Stocks

Gutsy contrarians are betting that inflation will be a lot lower in one year’s time, and lower still in two years.

Their outlook is at odds to Wall Street’s consensus, but that is the point. As Humphrey Neill, the father of contrarian analysis, reminded his clients: “When everyone thinks alike, everyone is likely to be wrong.”

The Wall Street consensus hit a crescendo this week with the release of the latest Consumer Price Index numbers. As judged by its change over the past 12 months, inflation is now running at 7.0%, a near-40-year high. Many of those who predicted that inflation would be transitory now say they believe inflation will remain higher and persist longer than envisioned.

Contrarians, in contrast, insist that talk is cheap. A narrative that is as widely held as the inflation-is-here-to-stay consensus gives analysts cover not to regularly subject their beliefs to critical scrutiny. But we should know better: The same people who now predict inflation will stay higher for longer were, just a year ago, insisting that low inflation was here to stay. Why should we believe them more now?

The fact is that most inflation forecasters do little more than extrapolate the recent past into the future. When inflation over the trailing year is high, they predict that it will remain high, and vice versa. Such extrapolation might be helpful if inflation exhibited trends — “inflation persistence,” as researchers refer to it. But, as I wrote a year ago, the historical evidence for inflation persistence is weak, at best.

The three inflation projection models listed below are among those that researchers have found to do better than naïve extrapolation.

The accompanying chart, below, plots what each of these three models is projecting for inflation in 2022 and 2023. On average, the models project that inflation this year will be 3.2%, which is less than half the CPI’s trailing 12-month rate of change. For 2023, the models’ average forecast is 2.1%.

I should stress that these three aren’t the only models that have decent track records. But they are enough to give us pause in blindly accepting the current consensus that high inflation will be persistent.

If the models are accurate, then contrarians among you might consider investing in bonds. Just as they have suffered in recent months as inflation has heated up, they should benefit as inflation cools.

Mark Hulbert is a regular contributor to MarketWatch. His Hulbert Ratings tracks investment newsletters that pay a flat fee to be audited. He can be reached at [email protected].