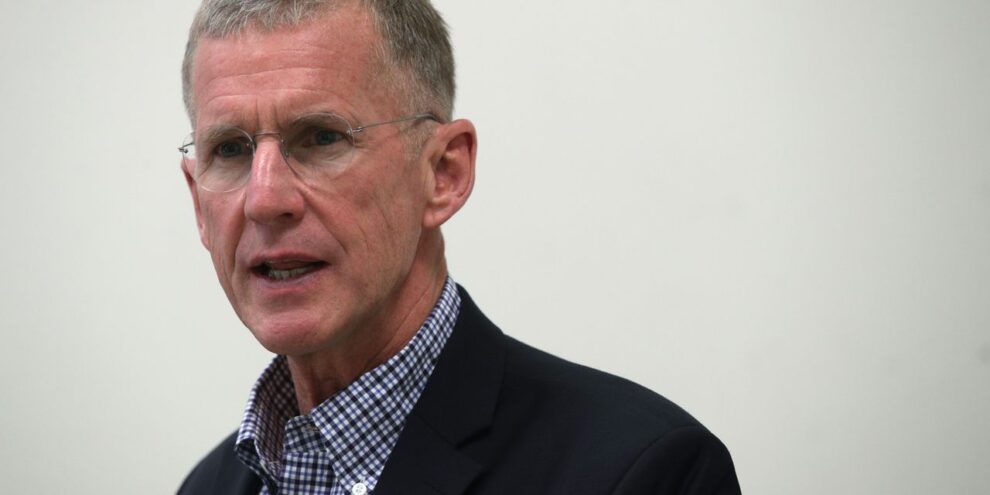 ‘We should have had a win. Instead, we lost hundreds of thousands of Americans and millions more around the world.’ Read More... 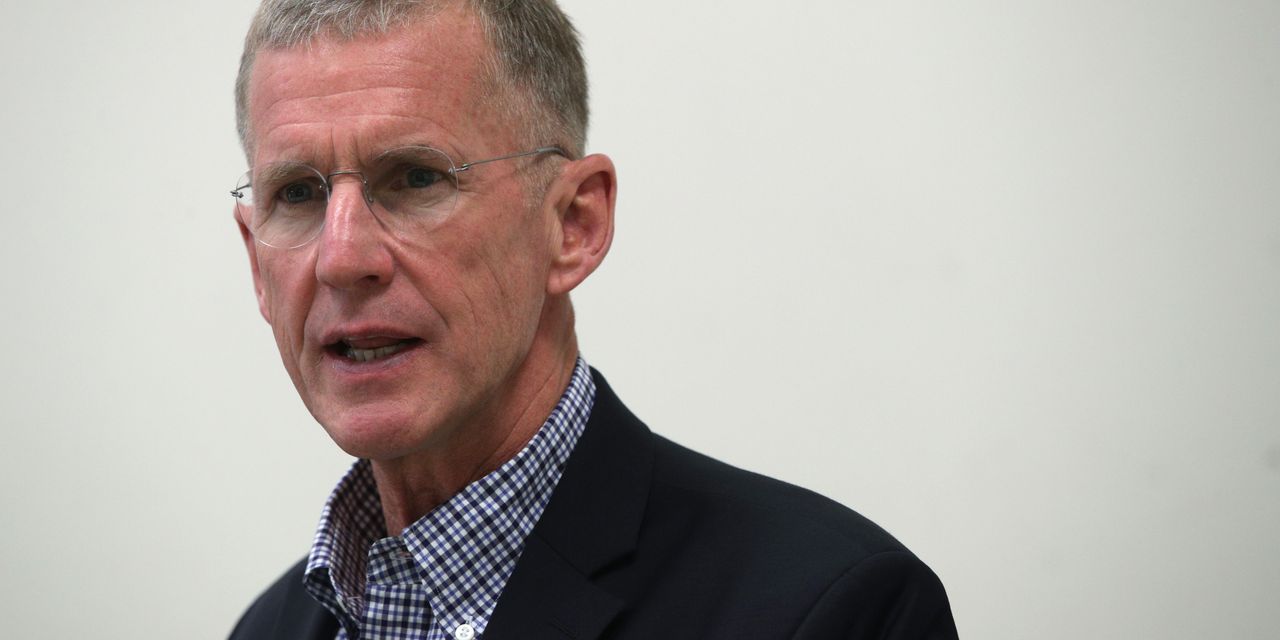 On his journey from battlefield general to Zoom-era grandparent, Stanley McChrystal has learned a thing or two about how plans go wrong. McChrystal commanded the U.S. operation in Afghanistan a decade ago and now sees the mission as a failure. “No way to sugarcoat that,” he says.

These days, his priorities are easier to manage. When the grandkids walk into a work call, McChrystal politely—but quickly—wraps it up. Every engagement has its risks.

MyCrystal retired as a four-star general in 2010 after a falling-out with President Obama. He now sits on the board of JetBlue and teaches leadership at Yale. He’s the author of a new book, Risk: A User’s Guide, which explores lessons from combat that can help inform leaders when it comes to surviving threats.

He sees those threats in abundance. Twice in an interview, McChrystal raised fears of existential threats—from a new pandemic, and in comparing the proliferation of social-media influence to the unchecked spread of nuclear weapons. He also believes the United States needs to take its relationship with China more seriously. U.S. ambiguity over Taiwan is becoming increasingly problematic, he says.

The following transcript was condensed and edited for clarity.

MarketWatch: You’ve advised state governments on the pandemic. What lessons can we take away from America’s federal response to Covid-19?

Stanley McChrystal: If you go back, Covid-19 was not that formidable a threat. We knew that it was coming. Not Covid-19 particularly but we knew that kind of viral threat came on a periodic basis and that a pandemic level was inevitable. And then we knew what to do about it because our experience in public health is really pretty rich. And then, with this pandemic, we had the extraordinary medical miracle where we produced vaccines faster than any time in history.

If you line those factors up, we should have had a win. Instead, we lost hundreds of thousands of Americans and millions more around the world. Some percentage probably could not have been saved. But the reality was that, from the outset, we didn’t communicate clearly and we therefore undermined our credibility on what the threat was and what we needed to do about it.

The responsibility of leadership is to move rapidly and effectively, and we just didn’t do that. We’d better go to school on this because, if we can get punished this badly by a pandemic like this, imagine how much worse it would have been with a virus like smallpox. Society’s very existence could have been threatened.

MW: When it comes to the Covid-19 vaccine, you’ve advocated for all active military service members to get the shot. Given resistance among many Americans, are you in favor of instituting a mandate?

McChrystal: I am. Go back to Gen. George Washington and the Continental Army. He dictated the vaccine for smallpox. Had he not done that, it is unlikely that the Continental Army would have won. Whenever somebody is providing protection for a society, then they’re also responsible for keeping themselves healthy so they can defend the nation. If you don’t take the vaccine, you’re not part of the solution and you’re potentially part of the problem. I feel very strongly: This is a case where responsibility to the whole trumps a person’s right to do whatever they want.

MW: Let’s shift to another frontier of vulnerabilities. How do you view a company like Facebook, which has been criticized for enabling global terrorist groups to recruit while also allowing domestic extremists to promote hateful views?

I would use an analogy to nuclear weapons at the end of the Second World War. We developed this horrific technology and we really hadn’t figured out how we were going to control it. That was OK for the first couple of years because we had a monopoly. But once global proliferation began then we suddenly had a very complicated world. There was a need for a number of protocols pertaining to holding countries responsible for having that kind of power.

The problem with social media is that we developed tools of equivalent danger because of the ability to pass information faster than we can think. I don’t think we’ve yet matured enough as a society to know how to control and deal with it.

MW: Given these risks, could the next American battlefield be online?

McChrystal: Yes, I think we will see war play out digitally. What if, on the Sunday afternoon before a Tuesday election, the Russians planted a semi-believable story about a candidate? And then there wasn’t time to gain clarity between Sunday afternoon and Tuesday morning before people started voting? The public would go into voting booths affected by that attack.

We are all extraordinarily brittle given this exposure, and our society is no longer capable of operating without the information technology that connects us all.

MW: With these types of dangers in mind, is the United States appropriately weighing the possibility of a major conflict with China?

McChrystal: In my personal opinion, we are not. I am not advocating for the resumption of the Cold War, but our competition with China is going to be a very hard-edged, long-term, economic competition. There is also a military competition as the Chinese have been on a breakneck development of military capacity over the last decade or so, which now makes it much harder for the U.S. to credibly limit the risk they pose.

We also have to recognize that we don’t have to be at war with China for there to be serious risks. We need to explore new policies that will increase protection for private investments, our national interests, our intellectual property, and our supply chains. In a peaceful environment, it makes sense for our supply chains to be built in low-cost areas of production. However, if they’re in a country like China that can then use that as leverage over us, then we’ve got to address that and find a different solution.

No matter what, we have to make the appropriate investments so that our military effectiveness against the Chinese remains a viable option. We’ve got to be able to do what we need to do in that region, which may include defending Taiwan.

MW: Are you concerned about America’s dependence on Taiwan for chip manufacturing?

McChrystal: We’ve got to make a definitive foreign policy decision on our relationship with Taiwan. And then we’ve got to make sure that all of our capacities for any single thing, like computer chips, are not in a place that could be controlled by a potential opponent. In that type of situation, there’s extraordinary susceptibility.

The larger question on Taiwan is deciding what our commitment is to Taiwan’s sovereignty. Ever since 1949, the Chinese have been claiming the nation as part of China and, in 1971, we recognized the One-China Policy. But, we’ve kept this intentional ambiguity about our willingness to help defend Taiwan. That’s become much more problematic because of Chinese military improvements.

MW: Do current global supply chains—and America’s dependence on single nations for various types of production—pose a risk to the U.S. economy?

McChrystal: Consider our ability to produce batteries and that production for cobalt largely comes from the Democratic Republic of the Congo and the product is then mostly processed in China. Items that are going to be central to our switch to electric vehicles and to different storage systems are dependent on a free flow of goods from China.

We’ve got so many things that are part of our vital supply lines that are at risk. We’ve got to step back and we’ve got to make some national decisions on which items need to be sourced within the United States. We at least need that capability so we’re not completely dependent. If somebody gets their hand around our windpipe and squeezes, then the nation suffocates.

Key Words: Here’s why Apple’s Steve Jobs didn’t want those ‘Mac vs. PC’ ads to be too funny

The Gross Law Firm Announces Class Actions on Behalf of Shareholders of REAL, MMSI and ACB