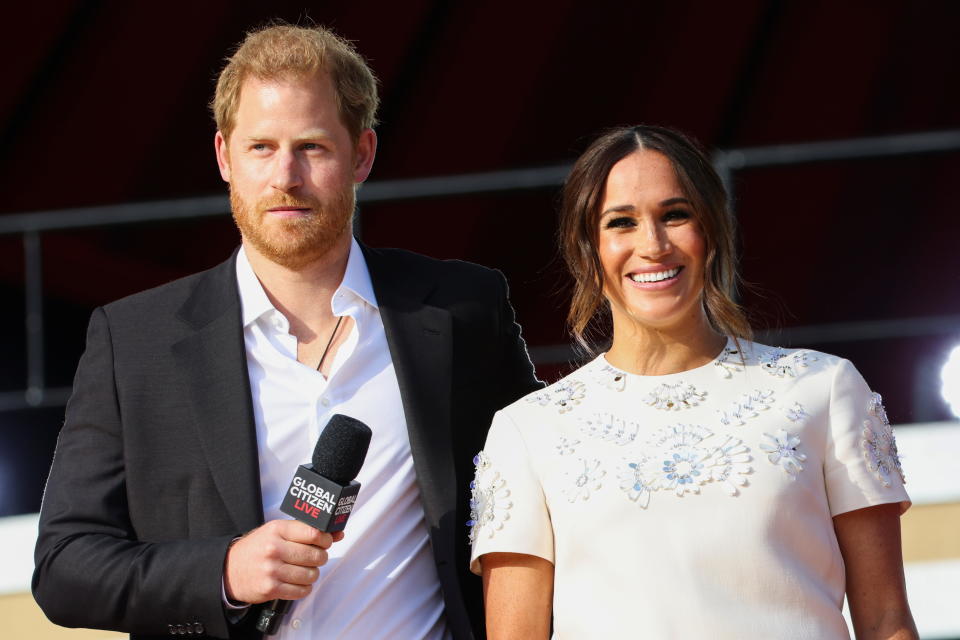 Markle’s longtime friend Serena Williams, who recently retired from pro tennis, joined as a guest. The two discussed balancing motherhood and careers, as well as the double standard women face when it comes to ambition.

Markle and her husband, Britain’s Prince Harry, signed a 3-year podcast deal with Spotify for an estimated $15 million to $18 million in December 2020. “Archetypes,” which works to “investigate the labels that try to hold women back,” is the first podcast series to debut under the exclusive partnership.

In addition to the Spotify deal, the couple has committed to a slew of other business and streaming endeavors as they begin work outside of the royal family.

Other collaborations include an ongoing partnership with Procter and Gamble (PG), the same company a young Meghan Markle called out over sexist ads 28 years ago; a 5-year Netflix (NFLX) deal valued at up to $100 million; an Apple TV+ (AAPL) series executive produced by Prince Harry and Oprah Winfrey; in addition to Harry’s hiring as the chief impact officer at San Francisco-based mental health startup BetterUp.

Spotify bets big on podcasts — but is it enough?

Spotify revealed during its investor day back in June it brought in roughly $215 million in podcast revenue last year after spending a whopping $1 billon on its podcast business.

Spotify’s chief content and advertising business officer Dawn Ostroff told investors the audio giant is still in “investment mode,” but expects the segment to be a “$20 billion opportunity” with continued improvements in both ad products and monetization.

CEO Daniel Ek also underscored the potential of the platform’s podcast unit, estimating that he expects it to generate margins between 40%-50%.

The platform locked in a three-year pact with the Obamas in late 2019; however, the couple recently decided against renewing their contract, opting for a deal with rival Audible.

The company ramped up its podcast push in early 2020, announcing its highly publicized licensing agreement with controversial podcast host Joe Rogan in May of that year. Although the exact figure is unknown, recent reports value the deal at $200 million.

Spotify purchased Bill Simmons’ sports media empire, The Ringer, for nearly $200 million in November 2020, while Harry and Meghan’s deal was finalized that next month.

Rogan, the most popular podcaster on Spotify’s platform with 11 million listeners per episode, came under intense scrutiny for spreading misinformation about COVID-19 vaccines and treatments — prompting an open letter from hundreds of scientists, professors, and public health experts who urged Spotify to crack down on Rogan and pandemic misinformation at large.

The controversy caused multiple analyst downgrades and a decline in the company’s share price, but Ek held strong, refusing calls for the company to “take on the position of a content censor.”

“To be frank, had we not made some of the choices we did, I am confident that our business wouldn’t be where it is today,” Ek reportedly told employees at a town hall following the Rogan misinformation debacle earlier this year.

As the dust settled on Rogan controversies, investors began to shift their attention onto the audio giant’s broader profitability struggles — despite leadership’s claim the billion-dollar podcast bet was “already starting to pay off.”

“While we believe there remains material user growth left for Spotify we highlight that many investors question whether Spotify will ever be able to generate significant lasting profitability,” Pivotal Research analyst Jeffrey Wlodarczak said in a note following the company’s Q2 earnings report.

Although the platform delivered a beat on revenue and monthly active users, it reported a wider-than-expected loss with gross margins disappointing at 24.6%, missing estimates of 25.2%.

Fueled by the broader market sell-off, shares have plummeted year-to-date — down more than 50% and off by about 70% since reaching an all-time high in February 2021.

Overall, executives continue to preach the long game to investors, even amid difficult macroeconomic conditions.

Ek doubled down on Spotify’s latest earnings call that the company has long-term pricing power, revealing that there’s been “no material impact” on users amid the downturn.

Still, the company is “preparing as if things can get worse,” Ek said, and plans to slow hiring by about 25% for the back half of 2022.