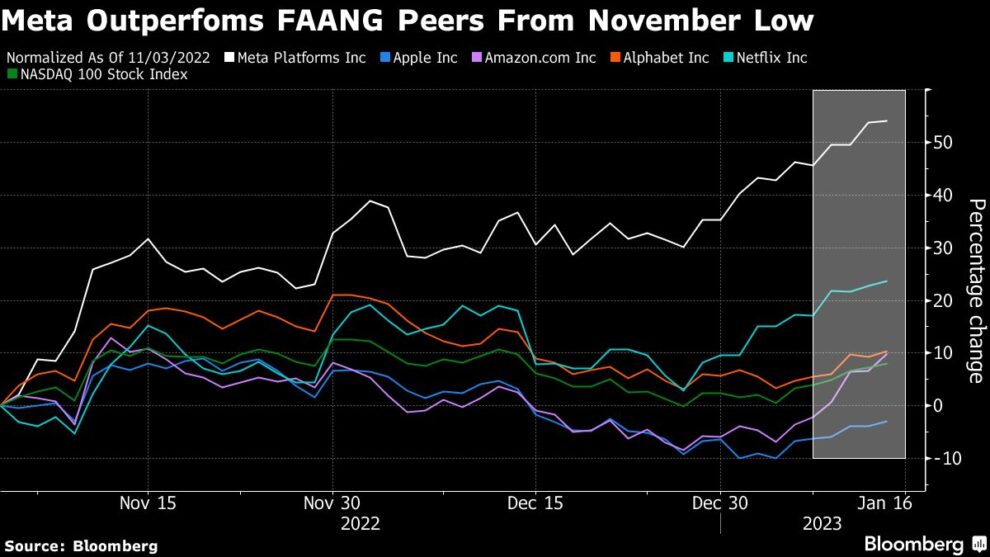 (Bloomberg) -- Meta Platforms Inc.’s market-beating rally of the past few months is failing to convince some skeptics, given how much money the owner of Facebook and Instagram continues to pour into building its version of the metaverse. Most Read from BloombergChina’s Population Shrinks for First Time Since 1960s in Seismic ShiftChief Executives, Economists Brace for Recession as Davos BeginsEuropean Stocks Rise as US Futures Signal Caution: Markets WrapItaly’s Most-Wanted Mafia Boss Arrested A Read More... 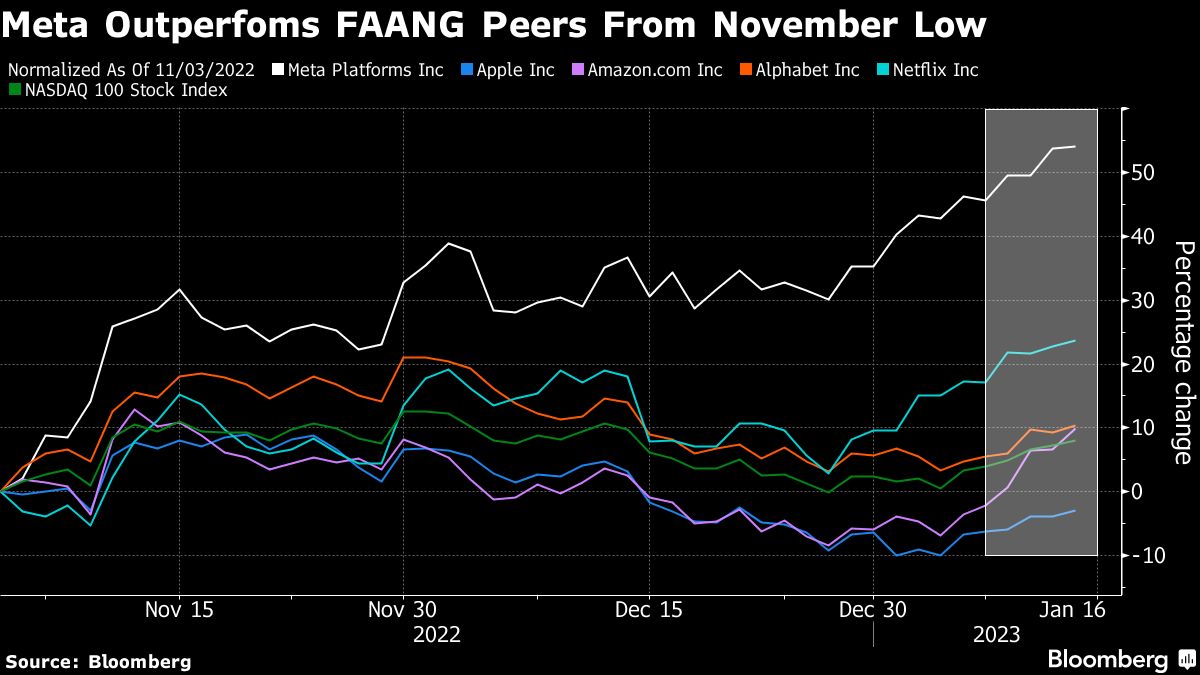 (Bloomberg) — Meta Platforms Inc.’s market-beating rally of the past few months is failing to convince some skeptics, given how much money the owner of Facebook and Instagram continues to pour into building its version of the metaverse.

Meta is the best performer in the S&P 500 Index since the stock’s recent low in November, gaining 54%. The bounce was partially driven by the social-media firm’s announcement that it would slash more than 11,000 jobs, the first major round of layoffs in the company’s history.

Yet signs of skepticism abound: Even after the surge, Meta sells for less than half its average price-earnings multiple of the past decade and is one of the cheapest stocks in the Nasdaq 100 Index. Its shares are still 64% below their 2021 record and analysts on average expect the stock to gain a mere 7.7% over the next 12 months.

The problem, from the bears’ perspective, is that Meta’s expensive bet on the metaverse — an immersive virtual world — isn’t going away any time soon and will account this year for a fifth of all costs. And its once-lucrative ad business is stagnating because of changes in Apple Inc.’s privacy policy that makes it more difficult to target consumers with ads on its devices.

The metaverse will keep the company’s expenses “relatively high,” said Louise Dudley, global equities portfolio manager at Federated Hermes. “There’s a lot of execution risk at Meta, making it a less of a bull case compared to the other mega-caps.”

For the rally to go further, Meta might need to offer investors more clarity on some things, including its strategy to tackle competition from social media rivals such as Tiktok.

Perhaps more crucially, investors will want to see how much of a squeeze Apple’s privacy policy change is continuing to put on ad revenue. In February, Meta estimated Apple’s move would cause a $10 billion revenue hit for the year.

And some Meta bulls hold out hope that Chief Executive Officer Mark Zuckerberg will pare further or give up entirely on his ambitions and spending for the metaverse. His hand may be forced by the looming economic slowdown, which is curbing sales at tech companies.

“This pressure on revenue growth may cause some of the tech companies we invest in to stop behaving as though money is free and halt some of the less promising projects outside their core business,” Terry Smith, manager of the $28 billion Fundsmith Equity Fund, wrote in a letter to investors this month, specifically citing Meta’s spending.

“Without that spend we would own a leading communications and digital advertising business on a single-figure price-earnings ratio,” he wrote.

A test will come Feb. 1 when Meta reports fourth-quarter earnings. Analysts have slashed their average expectations for adjusted earnings per share by 27% and for revenue by 15% over the last six months, according to Bloomberg data.

Still, there are plenty of bulls. JPMorgan Chase & Co.’s Doug Anmuth last month upgraded his recommendation on Meta to overweight from neutral, noting cheap valuations. And among investors polled by JPMorgan this month, 41% said they expected Meta to be the top-performing megacap internet stock of 2023.

Sylvia Jablonski, chief investment officer of Defiance ETFs, said Meta appeared to have recognized that shifting focus back to its ad business would be strategically better than throwing all of its eggs into the metaverse basket. This is “a welcome balance for investors,” she said.

Tesla Inc. shares are on track to fall for a sixth consecutive month, their longest losing streak on record. The electric-car maker’s stock has been weighed down by the surge in interest rates that’s caused investors to flee highly valued investments, and also by weakening consumer demand as well as CEO Elon Musk’s preoccupation with his acquisition of Twitter.

–With assistance from Tom Contiliano.