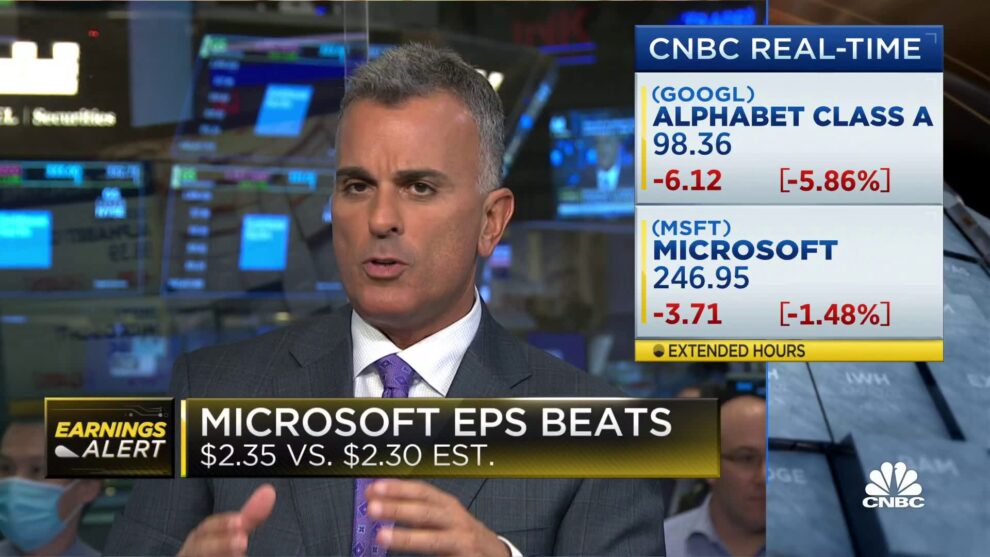 Microsoft's cloud revenue was lower than expected, and growth should slow further in the next quarter. Now executives will moderate operating expense growth. Read more...

Microsoft shares fell about 7% in extended trading on Tuesday after the company reported softer cloud revenue than expected in its fiscal first quarter and gave weak quarterly guidance.

With respect to guidance, Microsoft sees $52.35 billion to $53.35 billion in revenue for the fiscal second quarter, which implies 2% growth at the middle of the range. Analysts polled by Refinitiv had been looking for revenue of $56.05 billion. Microsoft’s implied operating margin for the fiscal second quarter was about 40%, narrower than the 42% consensus among analysts polled by StreetAccount.

In the fiscal first quarter, total revenue grew 11% year over year, according to a statement.

Net income fell by 14% to $17.56 billion. Microsoft had a $3.3 billion tax benefit in the year-ago quarter. But the company lengthened the useful lives of servers and networking equipment to six years from four years, resulting in an $859 million bump to net income in the fiscal first quarter. Still, the company’s gross margin, at 69.2%, trailed the StreetAccount consensus estimate of 69.8%.

Azure revenue grew 35% in the quarter, Microsoft said, compared with 40% growth in the previous quarter. Analysts polled by CNBC had expected 36.4% growth, while analysts surveyed by StreetAccount had been looking for 36.9% Azure growth. Growth in Azure consumption continued to moderate, and higher energy costs in the quarter hurt the gross margin of Azure, Amy Hood, the company’s finance chief, said on the call.

The Productivity and Business Processes segment that contains Microsoft 365 productivity software subscriptions (the company is in the midst of rebranding the bundle from Office 365), LinkedIn and Dynamics, posted $16.47 billion in revenue, up 9% and above the $16.13 billion StreetAccount consensus.

A majority of the Microsoft 365 bookings during the quarter came from E5, a higher-priced bundle, Hood said.

Revenue from the More Personal Computing segment totaled $13.33 billion, down slightly and higher than the $13.12 billion StreetAccount consensus. The segment includes Windows, as well as Xbox, Surface and advertising from the Bing search engine.

Revenue from sales of Windows licenses to device makers dropped 15% year over year, steeper than any quarter since 2015 and worse than the outlook Hood gave in July for a decline in the high single digits. The company said the PC market continued to deteriorate during the quarter.

Hood said on Tuesday that the materially weaker demand for PCs seen in September will continue to affect its consumer business. She called for a percentage decline in the high 30s for Windows revenue from device makers in the fiscal second quarter.

For the first time, revenue in the quarter from the Microsoft Cloud metric, encompassing Azure, commercial Office 365 subscriptions, commercial parts of LinkedIn and Dynamics 365, exceeded 50% of overall company revenue.

During the quarter, Microsoft started rolling out the first annual update to its Windows 11 operating system since releasing the original version last year, and the company announced plans to slow down its pace of hiring said it was cutting less than 1% of employees. Microsoft also introduced Viva Engage, a portal in the Teams communication app where co-workers can share video stories.

“In this environment, we’re focused on helping our customers do more with less, while investing in secular growth areas and managing our cost structure in a disciplined way,” Nadella said in the company’s earnings statement.

Operating expense growth should moderate materially during the 2023 fiscal year as the company focuses on improving employee productivity, Hood said.

The quarterly results include small adjustments in the way that Microsoft reports revenue. Revenue from HoloLens augmented-reality devices will appear in the More Personal Computing segment instead of the Intelligent Cloud segment. Microsoft adjusted its forecast for the segments by about $100 million in connection with the change.

Notwithstanding the after-hours move, Microsoft shares have fallen about 26% so far this year, while the S&P 500 stock index is down 19% over the same period.