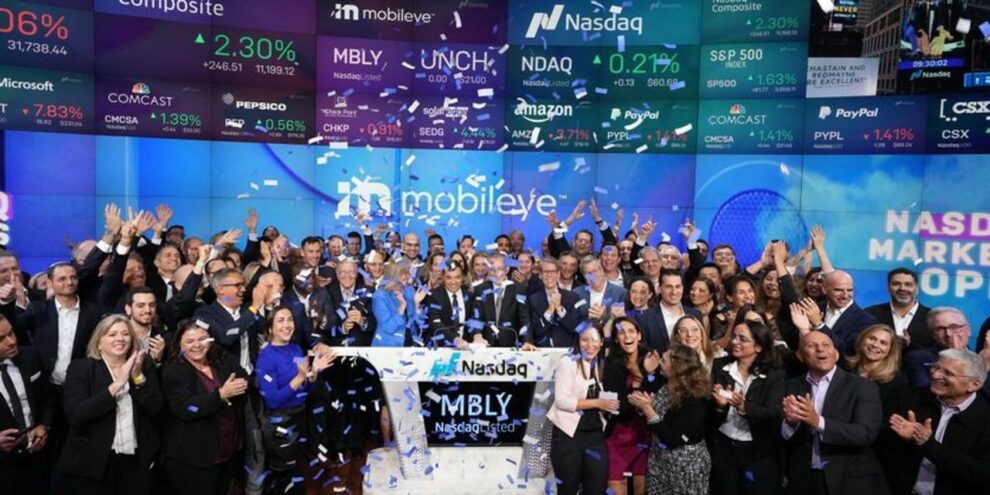 Mobileye Global Inc. received a warm welcome back to Wall Street on Wednesday, as the stock of Intel's autonomous-driving spinoff went up more than 30% in its first day of trading. Read More... 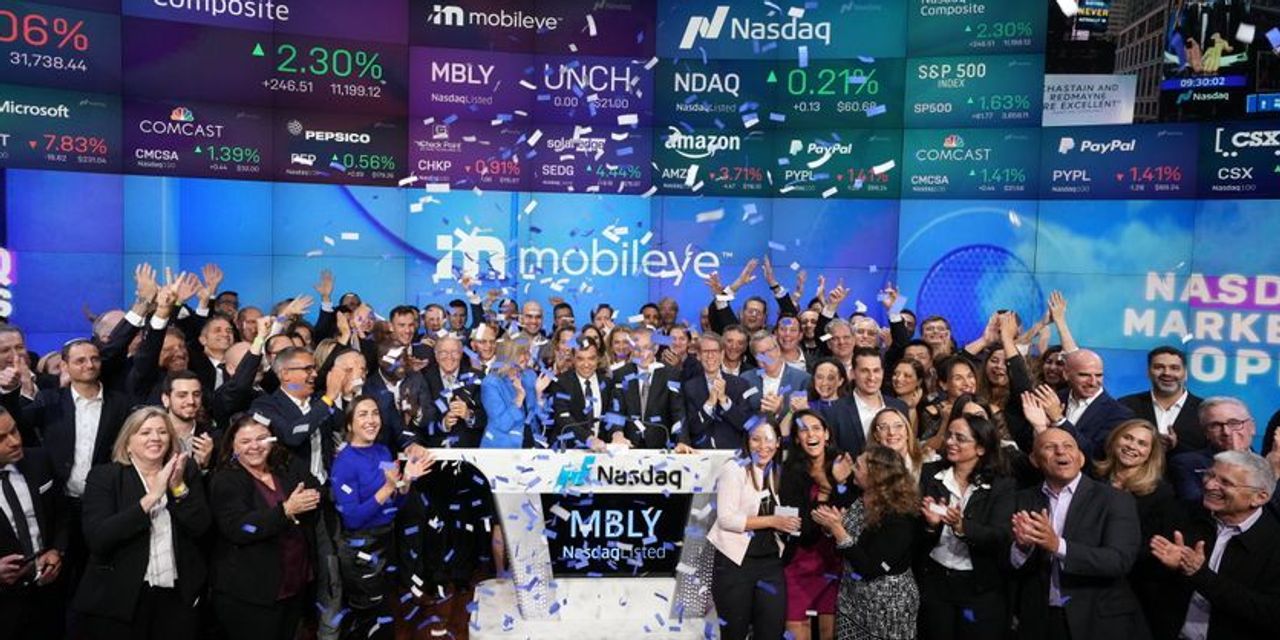 Mobileye Global Inc. received a warm welcome back to Wall Street on Wednesday, as the stock of the Intel Corp. autonomous-driving spinoff went up more than 30% in its first day of trading.

After pricing shares in its initial public offering at $21 apiece, $1 higher than the targeted range, Mobileye’s MBLY, +37.95% stock opened at $26.71 in its debut Wednesday morning on the Nasdaq and closed 38% higher than the IPO price at $28.97. After receiving a valuation of roughly $16.7 billion in the IPO, Mobileye’s market cap surpassed $23 billion at its closing price on the first day of trading.

“There’s probably very few companies that could go public in this market,” Mobileye Chief Communications Officer and head of investor relations Dan Galves said in an interview from Nasdaq on Wednesday, referencing a dormant IPO market and declining overall market in 2022.

Galves noted that companies going public now must have an established product position, drawing a distinction between Mobileye and younger companies focused solely on autonomous driving. Founded by Mobileye Chief Executive Amnon Shashua in 1999, the Israeli company has become the market leader in advanced driver-assistance systems, or ADAS — Galves noted that approximately 40 million cars manufactured in 2021 had forward-facing cameras installed, and Mobileye sold 28 million of the devices.

ADAS — examples include General Motors Inc.’s GM, +2.30% Super Cruise or Tesla Inc.’s TSLA, +1.00% Autopilot — offer features such as lane control and adaptive cruise control in highway conditions. Mobileye works with more than 50 auto manufacturers, installing such systems in more than 800 model types and 125 million individual cars, the company said in its filings with the Securities and Exchange Commission.

Mobileye is also looking to the next generation of automated driving by separately developing fully autonomous robo-taxis. The company has promised to roll out robo-taxis commercially in two markets, Tel Aviv and Munich, by the end of the year, and MKM Partners Managing Director Rohit Kulkarni noted from the company’s roadshow that executives presented “a somewhat ambitious medium-term target of producing a fully autonomous vehicle (AV) system at [less than] $6,000 per vehicle.”

But Galves said Wednesday that he had “spoken to over 100 investors in the past couple of weeks, and I could count the number of questions about AV on one hand.”

He said potential investors were not focused on potential tech breakthroughs, contending that the “damage that has been inflicted on the tech space this year” is because investors “do not want to pay for earnings 3, 4 or 5 years down the road.”

“Investors do not want to talk about [autonomous vehicles] right now,” Galves told MarketWatch in a videoconference interview. “Frankly, we don’t really want to either — we are confident in the direction of our AV development, but it is a corollary to the products we can offer today.”

Intel INTC, -0.73% agreed to pay $15.3 billion in cash for Mobileye to take the automated-driving pioneer off the public markets in 2017, though the acquisition took until 2018 to officially close. Intel Chief Executive Patrick Gelsinger accompanied Shashua to the Nasdaq on Wednesday to celebrate the first day of trading; Gelsinger is expected to serve as chairman of Mobileye’s board.

Shashua published a letter to customers after the stock began trading, calling it “an exciting new chapter in Mobileye’s history.”

“This is not new territory for us,” Shashua wrote. “We operated independently before and during our time with Intel — self-funding our R&D and transformation from technology supplier to mobility enabler. And I am confident in our ability to continue growing and thriving as a publicly traded company.”

Don’t miss: Five things to know about the Mobileye IPO as Intel returns the automated-driving company to Wall Street

Galves, who left Mobileye not long after the Intel acquisition and returned in February, said that changes were small both when the company was acquired and now that it will be independent again.

“It’s the same management team executing the same plan, but some of the stuff that was in advanced R&D in 2017 are now products,” he said.

“Now that we’re [going] public, I don’t think anything really changes,” he added. “We’ll report our own earnings, and we have a stock that’s going to move, and that helps to generate attention from media, industry analysts and research analysts.”

Mobileye raised just short of $1 billion in the IPO, though the total could top that mark if underwriting banks sell the overallotment stake of more than 6 million shares. Only two initial offerings have raised $1 billion or more in 2022, as the IPO market has dried up following a record year — private-equity firm TPG Inc.  TPG, -0.67% raised exactly $1 billion in January, and American International Group Inc.  AIG, -0.13% spinoff Corebridge Financial Inc. CRBG, +0.49% raised at least $1.68 billion in September.

Intel will receive the bulk of the cash raised in the IPO. Mobileye agreed to return as much as $3.5 billion to Intel in a dividend, though the parameters established require that Mobileye have $1 billion in cash and equivalents and that nothing be owed after the IPO. Wells Fargo analysts wrote that about $225 million will go to Mobileye, while the rest goes to Intel.

Intel will also retain official control of Mobileye, holding on to 94% of the economic interest in the company and more than 99% of the voting control. The Wells Fargo analysts suggested that the valuation of the stock Intel will retain should be worth about $3 to $4 a share for the Silicon Valley chip maker.