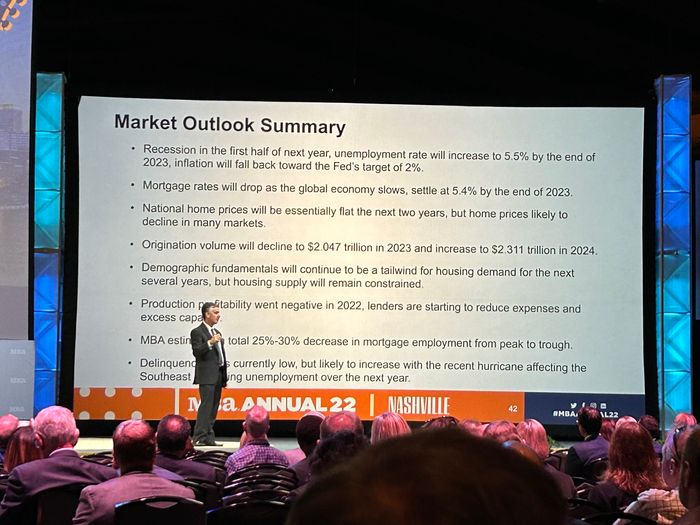 The Mortgage Bankers Association is expecting a recession to hit in 2023, and expects rates to fall. Read More...

NASHVILLE — A mortgage industry group is expecting a recession to hit the U.S. economy.

“The upside of that potentially for the industry is, that’s the thing that’s likely going to bring rates down a little bit,” he added.

In a statement, Fratantoni said the MBA’s forecast calls for a recession in the first half of 2023, and predicts the unemployment rate will rise from 3.5% to 5.5% by the end of next year.

“We’re beginning to see some significant signs of softening in the labor market,” Frantantoni said.

He expects companies to no longer be scrambling to fill job openings, and that hiring will eventually cool off.

That’s in stark contrast to the latest unemployment rate in September, which was 3.5%, according to the Bureau of Labor Statistics.

“So a very, very different job market to today,” Frantantoni said. “I do expect the next couple of months are gonna be a pretty abrupt transition.”

With a recession on the horizon, expect mortgage rates to come down to close to 5.4% at the end of next year, he said, versus the 7%-plus rates that the market is seeing today.

“We are holding to our view that this is a spike right now, driven by financial-market dislocation, heightened level of volatility in the market and this global slowdown we’re about to experience, the likelihood of recession in the U.S. will begin to pull this number,” Fratantoni said.

Given the massive rise in rates this year, with the 30-year fixed rate averaging 6.94% last week as compared to 3.85% a year ago, many potential home buyers have decided to wait as their projected monthly mortgage payments have become unaffordable.

Home sales have plunged, and are dragging down home prices. Sellers are also making more concessions in their attempts to woo buyers.

As a result of the slowdown, the MBA is expecting total mortgage origination volume to fall to $2.05 trillion in 2023 from the $2.26 trillion expected in 2022.

They’re also expecting purchase originations to drop 3%, and refinances by 24%.