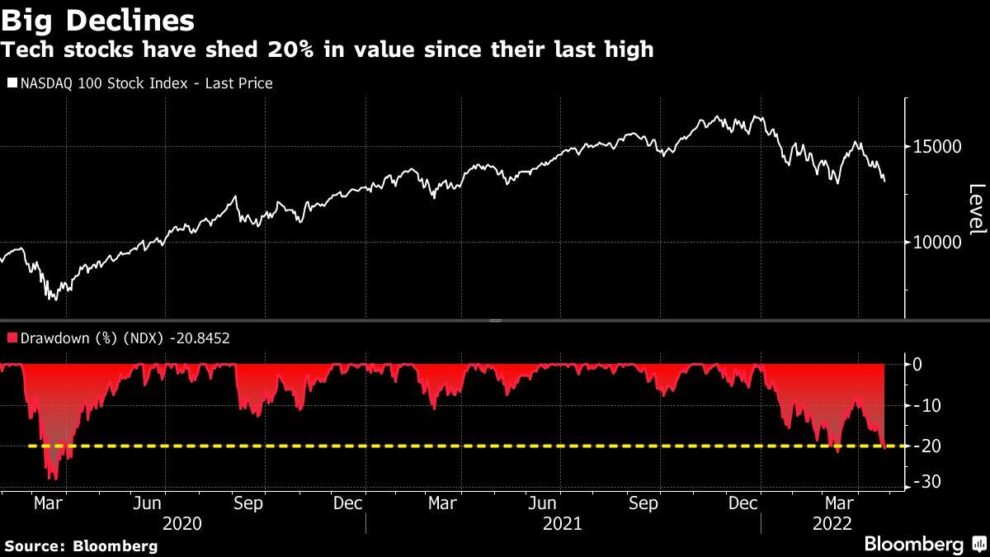 (Bloomberg) -- Covid in China, war in Europe and changing perceptions about the invincibility of Big Tech companies are behind a plunge in the Nasdaq 100 Index that reached as much as 3.2% on Tuesday.Most Read from BloombergElon Musk Lands Deal to Take Twitter Private for $44 BillionRussia Warns of Nuclear War Risk as Ukraine Talks Go OnUkraine Latest: Lavrov Warns of Nuclear War; Biden Names EnvoyAnger in Japan as Ukraine Links Emperor Hirohito to Adolf Hitler‘Weak Sauce’: Elon Musk’s 2018 Feud Read More... 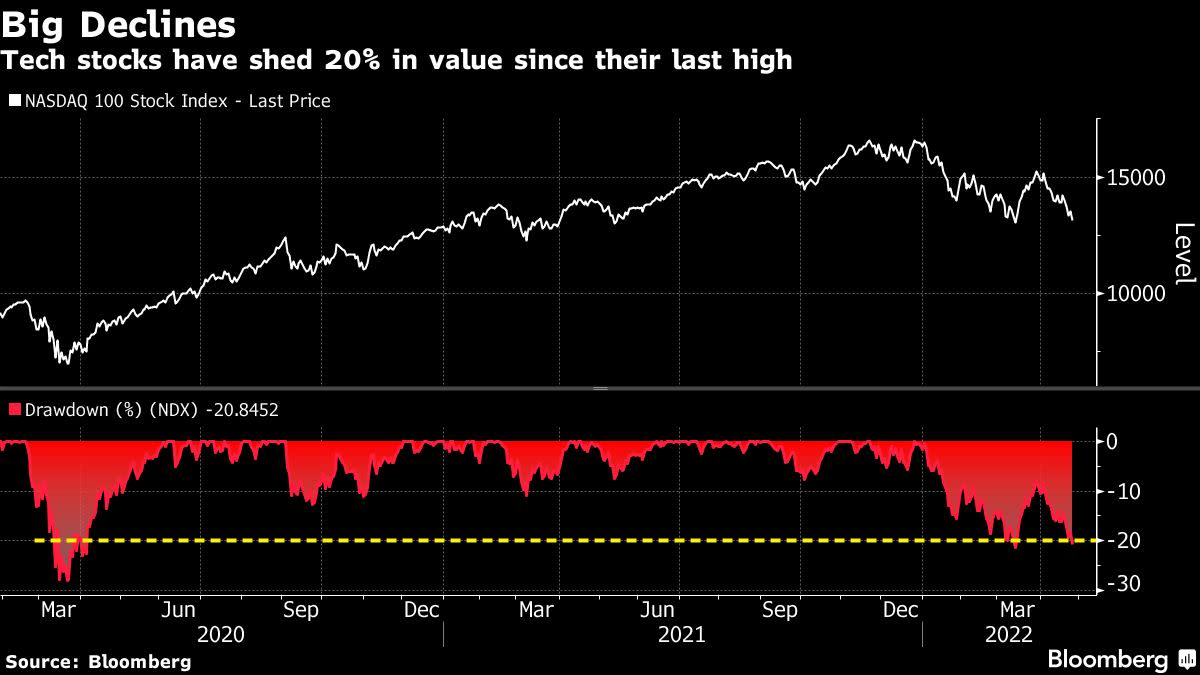 (Bloomberg) — Covid in China, war in Europe and changing perceptions about the invincibility of Big Tech companies are behind a plunge in the Nasdaq 100 Index that reached as much as 3.2% on Tuesday.

Only 10 of the index’s components are trading higher for the day. Tesla Inc. led declines, dropping by more than 10%. Meanwhile, unprofitable tech companies lost 5% at one point, with a gauge tracking such firms on pace to close at its lowest since mid-March.

“This is a market right now that just wants to go down,” Chuck Cumello, president and chief executive officer of Essex Financial Services, said by phone.

Stock volatility since the start of the year has been driven by many factors, not least of which is the Federal Reserve signaling that it will move aggressively to tamp down hot inflation. That has weighed down the Nasdaq 100, whose technology stocks are extra sensitive to interest-rate changes. The index is down 20% from its January high.

‘Swimming Against the Tide’

Shares of Netflix Inc. plunged last week after the company reported a surprise miss in subscribers. That opened investors’ eyes to how quickly sentiment can change in this environment, said Adam Phillips, managing director of portfolio strategy at EP Wealth Advisors. And with rates expected to move higher, “these stocks will be swimming against the tide.”

“Although it seems like a crowded trade at this point, there is likely more pain in store for some of these tech companies as rates grind higher,” he said. “As we saw with Netflix, this earnings season will serve as a make-or-break moment for these growthier names where confidence is waning.”

Sam Stovall, chief investment strategist at CFRA, said he’s focusing on the Covid lockdowns in China, where the crisis is intensifying and where residents are being kept in their homes to stop spreading the virus. These lockdowns could exacerbate supply-chain issues for technology companies and weaken demand.

“Because of the shutdown of Shanghai and other cities in China, a lot of the parts that are used in hardware are unable to be shipped around the globe to satisfy hardware orders, and so from a technology perspective, I think that’s putting pressure,” Stovall said. “Also if people can’t leave their homes, then you’re talking about a pretty large amount of people who not able to purchase items.”

Another supply-chain concern is Russia’s apparent decision to engage in a war of attrition in Ukraine. This means that shortages of some raw materials and food “are going to be with us for a long time — that will make it much tougher to tame inflation,” said Matt Maley, chief market strategist at Miller Tabak + Co. Higher inflation for a longer period of time will bring higher interest rates “and that is not good for big-tech earnings,” he said. It also doesn’t help that Russia is warning about the risks of nuclear war.

For Liz Ann Sonders, chief investment strategist for Charles Schwab & Co., there is little point in predicting how many rate hikes the central bank will employ by the end of the year. While two successive 50-basis point hikes have been priced in by the markets, there is little clarity on what happens beyond the summer, she said.

“In the past, the Fed has put themselves on a predetermined course. They telegraphed what their plans are either with balance-sheet runoff or rate hikes,” she said by phone. “They’re not doing that this time other than very strong hints of 50 probably for a couple of meetings. But I don’t think that we can assume anything beyond the next two or three meetings.”

When asked what she sees as the biggest risk for the market, Aoifinn Devitt, chief investment officer at Moneta, cited everything from the war in Ukraine to rising Covid-19 cases in China. But high up on her list is that the central bank may over-tighten.

“There is a threat that the Fed will overshoot, and we are in an unprecedented circumstance in terms of the long period of monetary easing and the rising inflation, which it seemed took them some time to take an aggressive stance around,” she said by phone. “If they overshoot and spook markets to the extent that there is a pullback, that would be a risk.”