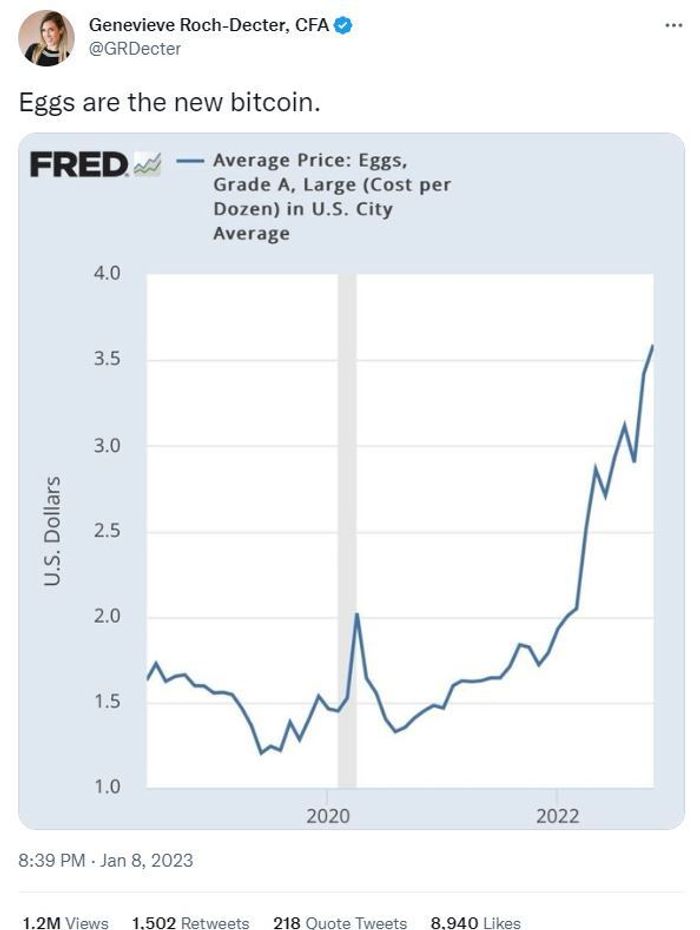 Our call of the day comes from a CIO's chat with another CIO who says the Fed doesn't think big investors haven't seen enough of a scare. Read More...

Investors are waking up to a whiff of positivity where stocks are concerned for Monday, after last week’s first gain in five that was prompted by weak wage growth

Alongside a bleak Institute for Supply Management services survey, the data is sending the message to some that the Fed now has more evidence to start winding down its tightening cycle.

But not so fast says our call of the day. It comes from Eric Peters, the chief investment officer of One River Asset Management, who was chatting with a fellow CIO who offered up his own line in the sand for when Fed Chairman Powell will put on the brakes.

“Prepandemic a heavy jet cost $7k-9k an hour to charter. Now it costs $18k-$20k,” the unidentified CIO told Peters and noting that his own private indicators that show a still white-hot market. “All these guys worth $100mm got sucked into a portfolio mix with 75% illiquid investments, 25% liquid. Guys like that spend $3mm-$5mm year and make $2mm after tax. They’re slowly bleeding, but even after last year are not yet scared,” he said.

“Powell won’t finish tightening the tourniquet until he terrifies these guys,” he said. “They need to feel like their private portfolios won’t come back. They need to see their liquid portfolios lower still. They need to take losses to raise liquidity. It happens every cycle. We’re clearly not there yet.”

When it comes to rich getting poorer, Tesla TSLA, +8.20% CEO Elon Musk’s became the only person in history to lose $200 billion, from his wealth peak in November 2021, which some blame on his time-consuming Twitter takeover, plus soft consumer demand in China and elsewhere. Yet elsewhere, according to Bloomberg’s Billionaire Index, Berkshire Hathaway Chairman Warren Buffett is about $3.27 billion richer than he was a year ago.

Peters’ fellow CIO goes on to talk about how prices in recent months have “fallen faster than monetary policy can possibly explain.”

“The next two months will tell us whether this is a bizarre blip or something real. But I see problems for stocks either way,” he said. “If inflation stays high, the Fed will hike to 6%. And if inflation falls quickly, margins narrow as wages stay high, and again stocks come under pressure.”

And the economy is transitioning to an even tougher period for investors — the “stagflation quadrant” that brings slowing growth and softer inflation. “It’s a quadrant where you need to look for idiosyncratic alpha, relative value trading,
cross market kinds of opportunities. It’s tough.”

Read: ‘Markets are going to get rocked’ as Fed is likely to push rates higher, economist warns

To a lesser extent, shares of biopharma gene-therapy group Ocugen OCGN, +0.77% rose on news of positive results from a COVID trial.

Lululemon shares LULU, -9.18% are down about 10% after the athleisure wear maker lowered its margin guidance. Nike NKE, +1.17% and Under Armour shares UAA, +0.19% are falling in sympathy.

China’s long-running crackdown on internet companies is almost over, a top central bank official reportedly said. That helped boost a swath of companies that were rising in premarket, including Alibaba BABA, +3.04%, which was also up on news co-founder Jack Ma is ceding control of affiliate company Ant Group, possibly allowing for IPO plans to be revived.

A cargo vessel briefly ran aground in Egypt’s Suez Canal, blocking traffic and stirring up memories of a 2021, when a similar incident in jammed up the vital waterway for six days.

At least 300 have been arrested in Brazil after pro-Bolsonaro rioters stormed government buildings on Sunday, an event that echoed the January 2021 insurrection on the U.S. Capital.

Globalization is not dead, but is facing a big tail-risk, says this expert

Gen. Z’ers are dusting off their parent’s digital cameras

Australians flock to a flower that blooms every few years, but reeks of dead rats.

Farewell to the world’s best restaurant.